Yves here. I hope you’ll circulate this post widely. Liberals and libertarians have done a wildly effective job of depicting popular positions that have majority or at worst strong plurality support over time, like ending the wars, increasing the minimum wage, and strengthening Social Security as progressive, or even worse, pinko, and therefore fringe. It is particularly important to demand support of social programs as Democratic party incompetence increases the odds of clear Republican wins.

As progressive lawmakers renewed calls for protecting Social Security from GOP attacks, Data for Progress on Monday pointed to polling that shows about 80% of U.S. voters across partisan divides support boosting benefits.

The program traces back to the Social Security Act, signed into law on August 14, 1935 by then-U.S. President Franklin D. Roosevelt. Marking the 87th anniversary Sunday, the Congressional Progressive Caucus (CPC) warned that the program is “under attack from Republicans,” despite its popularity among voters.

Data for Progress highlighted Monday that 86% of voters surveyed in June said they are “very” or “somewhat” concerned that the U.S. government will reduce Social Security benefits for those who currently receive them. 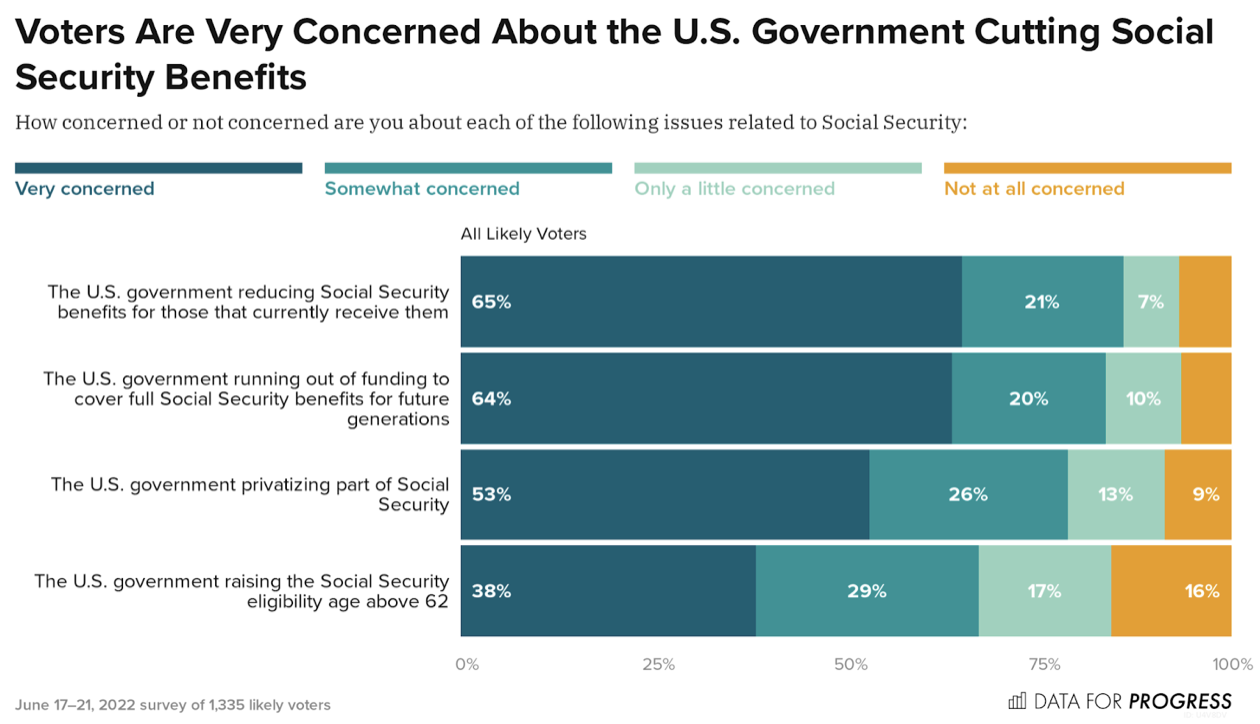 In July, the progressive think tank found that 70% of all voters—including 76% of Independents, 71% of Republicans, and 64% of Democrats—said they had heard “nothing at all” about GOP proposals to “sunset” the program. 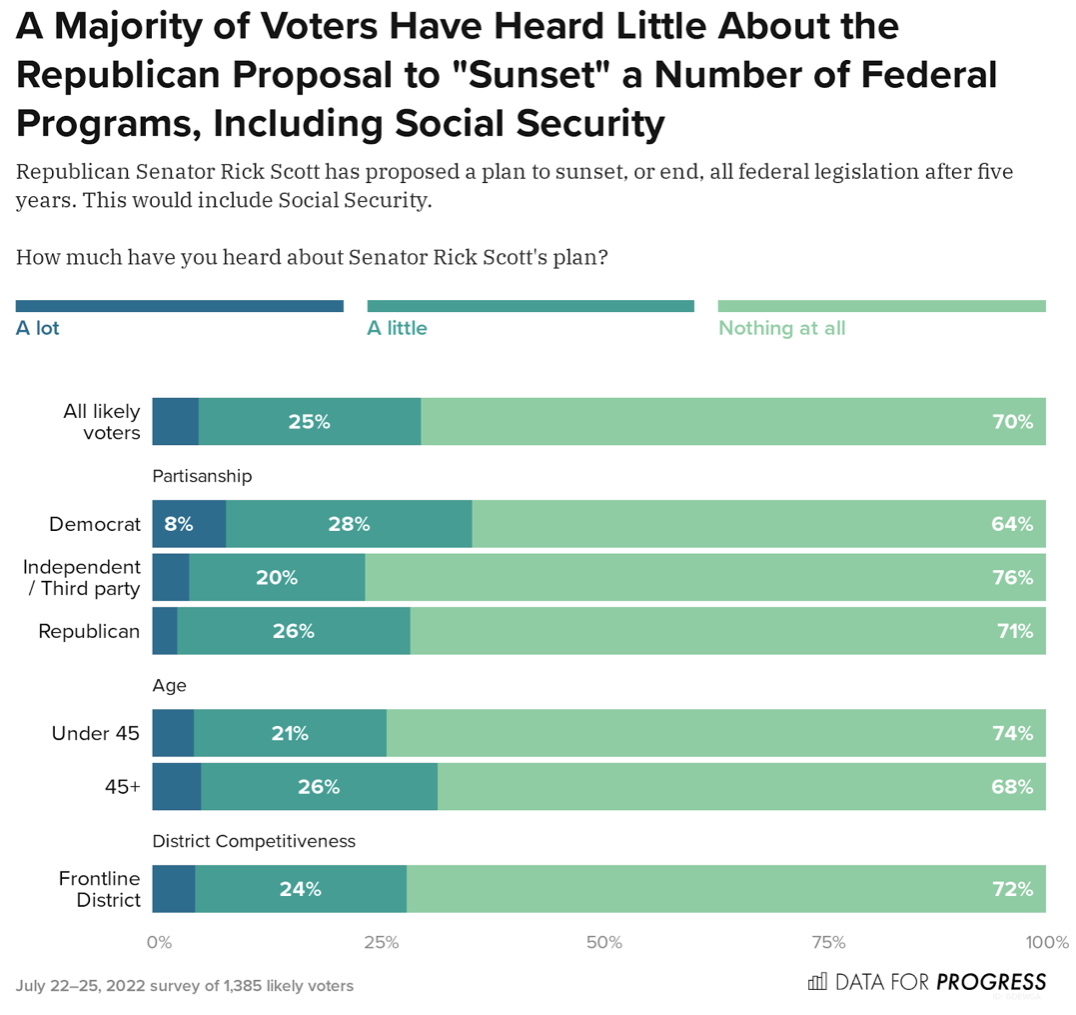 Data for Progress also found last month that 81% of all likely voters—including 88% of Democrats, 79% of Independents, and 75% of Republicans—support legislation to raise Social Security benefits to match the cost of living. 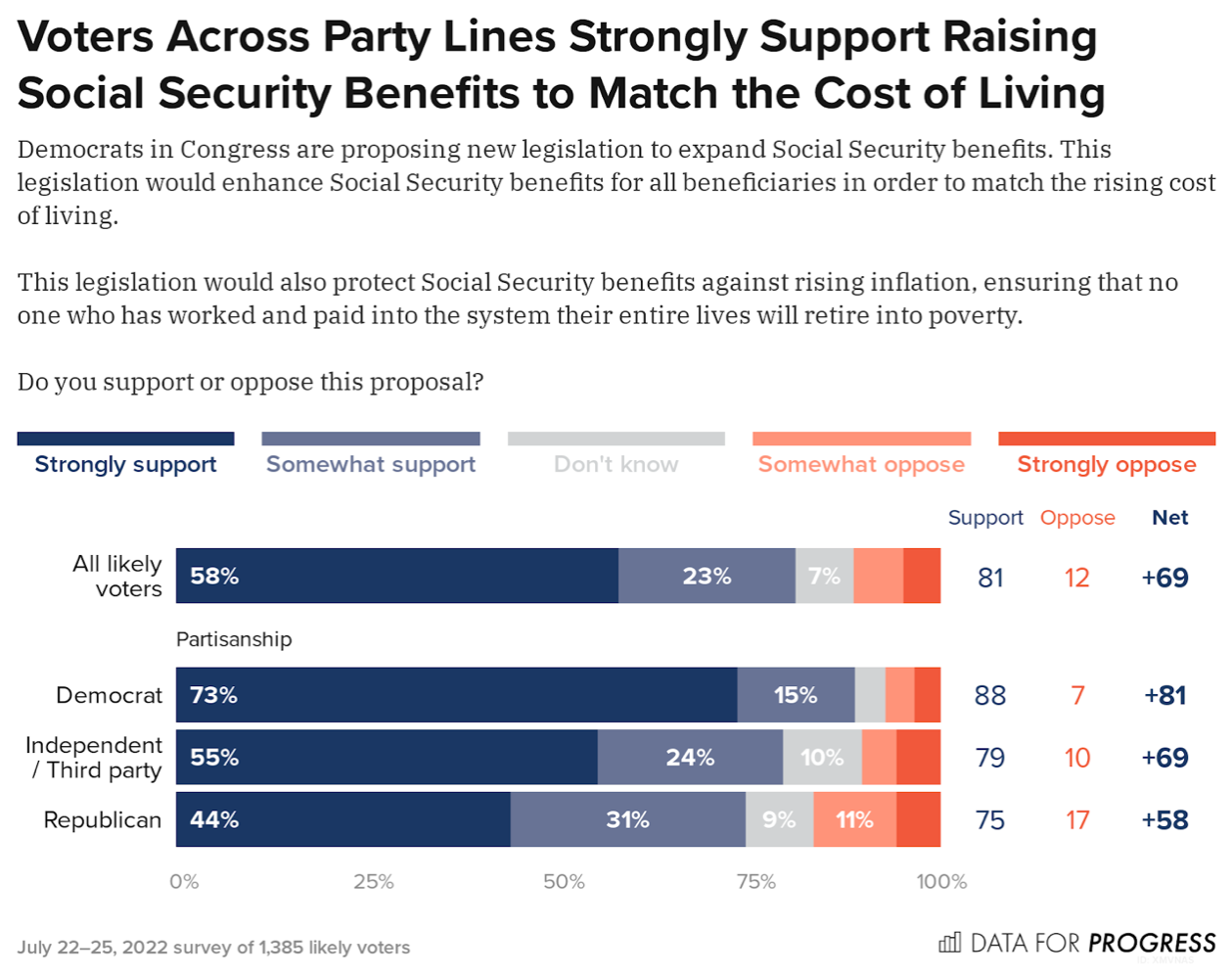 “Moreover, voters strongly support the pay-fors introduced in new legislation that would increase the solvency of Social Security and pay for new, expanded benefits,” the group noted in a blog post. “We find that 76% of voters support imposing a payroll tax on Americans making more than $400,000 annually, including 88% of Democrats, 76% of Independents, and 65% of Republicans.” 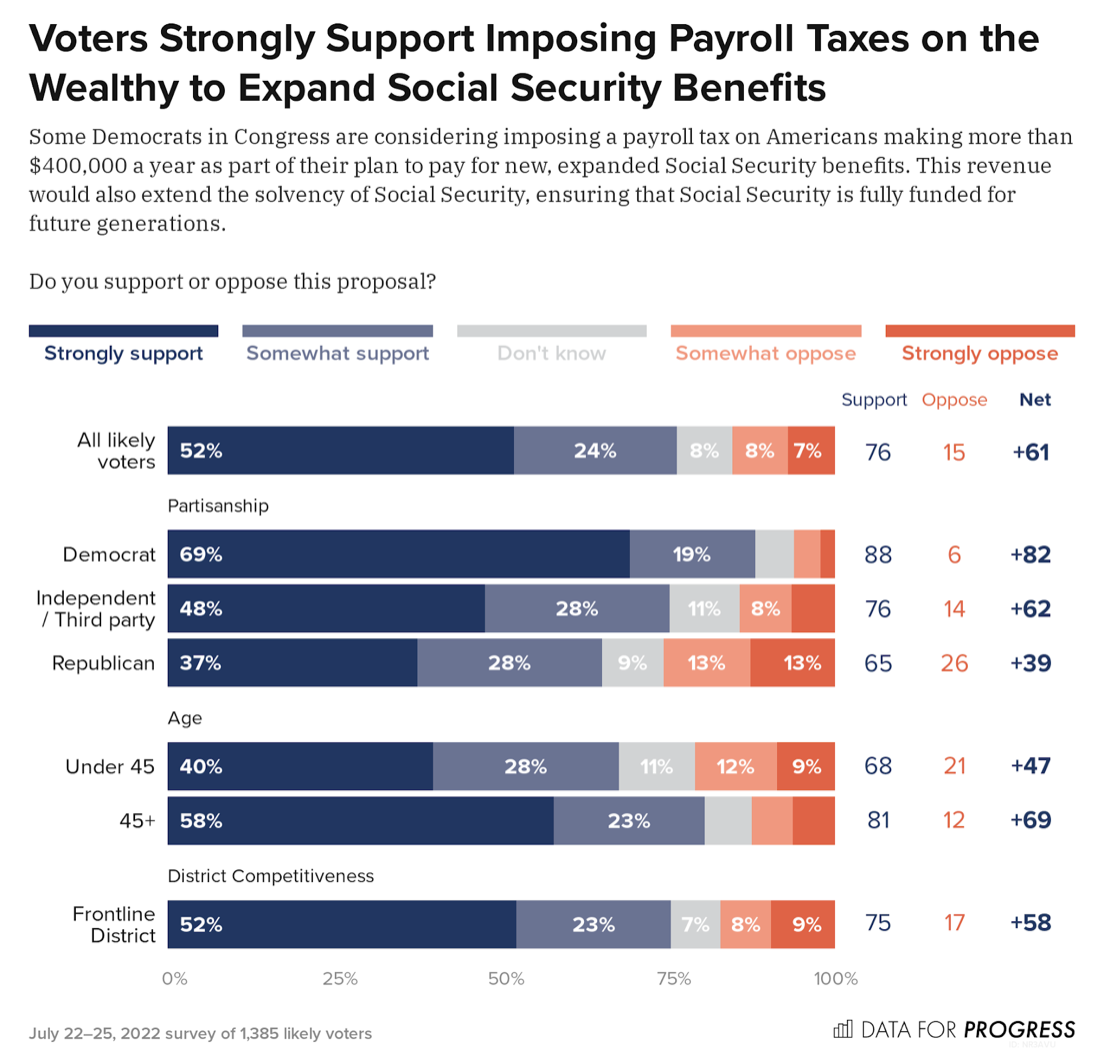 The July polling further showed that 79% of all voters—including 89% of Democrats, 72% of Independents, and 72% of Republicans—believe Congress “should vote to expand Social Security benefits now, even though Democratic proposals only expand benefits for five years and would raise taxes on Americans earning more than $400,000 per year.” 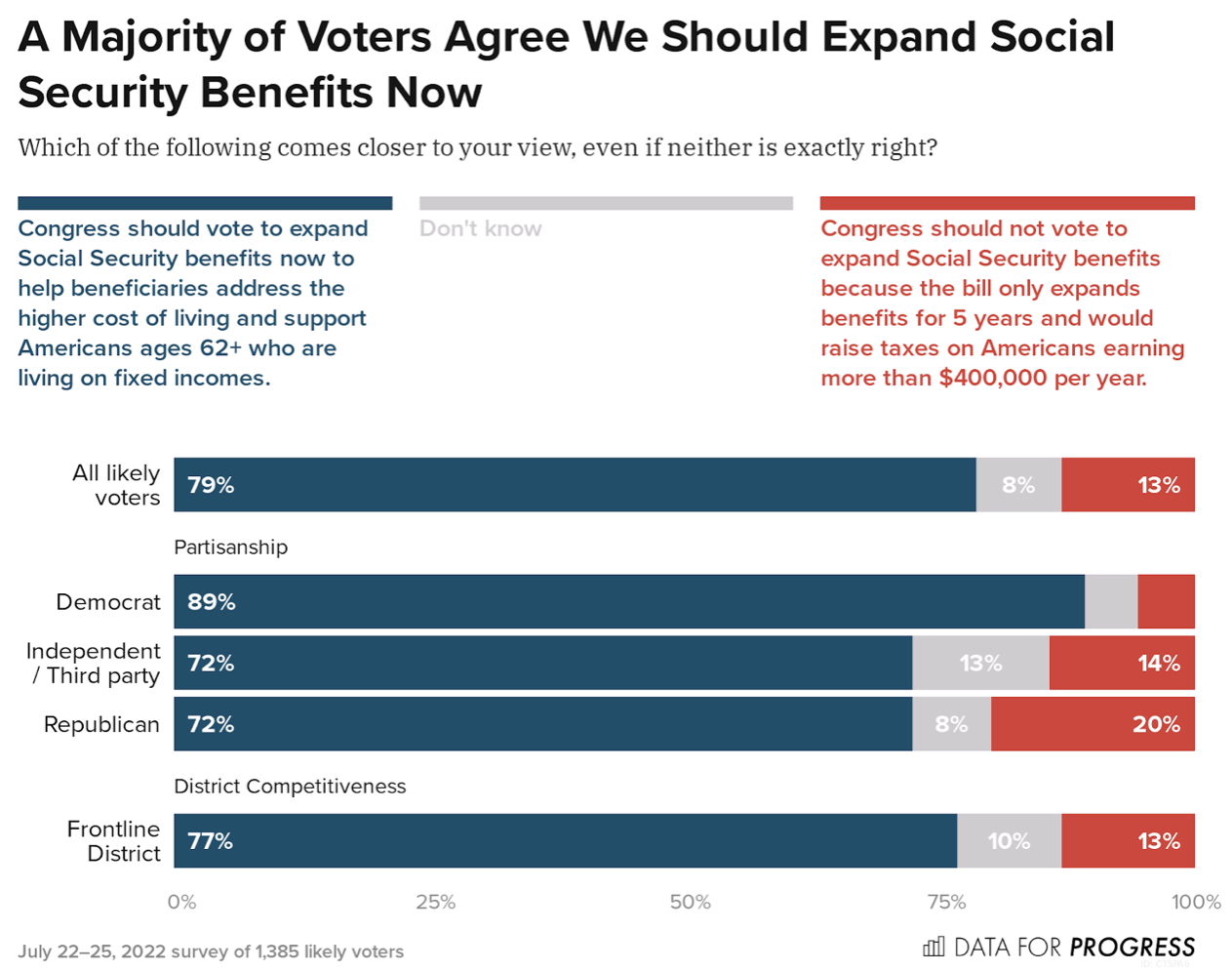 As Democrats worry about losing control of Congress this November, the think tank pointed out that polls from this year suggest candidates would do better in elections if voters knew they want to expand Social Security.

Carly Berke, the strategic partnerships coordinator at Data for Progress and co-author of the new blog post, tweeted that amid GOP attacks on Social Security, Democrats “need to make clear they’re fighting to protect and expand benefits.”

U.S. Rep Pramila Jayapal (D-Wash.), the CPC’s chair, and other members of Congress made that message clear in a Monday afternoon event hosted by Social Security Works.

Jayapal urged those benefiting from the program to share their stories and pressure lawmakers to pass Social Security 2100: A Sacred Trust, legislation introduced by Rep. John Larson (D-Conn.).

“Social Security has provided our nation with the most comprehensive retirement, disability, and survivors benefits for 87 years,” Larson said in a statement. “Democrats are fighting to expand and protect it, yet my Republican colleagues have plans to cut benefits and even end the program as a whole.”

“Congress has not acted in 50 years to enhance benefits,” he noted. “The American people have made clear they want to protect the program they pay into with each and every paycheck so they can retire with dignity. With the Covid-19 pandemic still impacting our country and Republicans revealing their plans to end benefits, there is a fierce urgency to protect and enhance Social Security now.”

While Democrats have a plan to protect and enhance #SocialSecurity, Republicans have shared their plans to privatize, cut, and even end this program! We must pass Social Security 2100: A #SacredTrust to ensure this program serves our country for years to come! @RepJohnLarson pic.twitter.com/5RiTG29FaH

Advocating for his bill, Larson said that “alongside commemorating 87 years of this program, Congress must pass Social Security 2100: A Sacred Trust to make much-needed benefit improvements and ensure this program can serve our nation for years to come. Congress must vote!”

Millions of Americans depend on the benefits they have earned. Instead of threatening to cut SS, Republicans should support my bill, which would ensure solvency for 75 years, increase benefits, & update the COLA formula to meet the everyday needs of our nation’s seniors.


“A lot has changed in 87 years, but Americans’ reliance on Social Security has not,” DeFazio said Monday. “My bill, the Social Security Expansion Act (SSEA) would enhance monthly benefits and keep the program solvent through 2096.“