Human Augmentation – The Dawn of a New Paradigm GOV.UK

The Place With the Most Lithium Is Blowing the Electric-Car Revolution WSJ. Oh?

Who Will Be Held Accountable for CDC Dishonesty? RealClearPolitics

COVID rebound is surprisingly common — even without Paxlovid Nature

Omicron is considered a milder coronavirus, but scientists aren’t so sure LA Times

Rate of SARS-CoV-2 Reinfection During an Omicron Wave in Iceland JAMA. The Discussion:

In this population-based cohort study, a substantial proportion of persons experienced SARS-CoV-2 reinfection during the first 74 days of the Omicron wave in Iceland, with rates as high 15.1% among those aged 18 to 29 years. Longer time from initial infection was associated with a higher probability of reinfection, although the difference was smaller than expected. Surprisingly, 2 or more doses of vaccine were associated with a slightly higher probability of reinfection compared with 1 dose or less. This finding should be interpreted with caution because of limitations of our study, which include the inability to adjust for the complex relationships among prior infection, vaccine eligibility, and underlying conditions. Importantly, by December 1, 2021, all persons aged 12 years and older were eligible for 2 or more vaccine doses free of charge, and 71.1% of the Icelandic population had been vaccinated,5 compared with only 25.5% of our cohort of previously infected persons. Our results suggest that reinfection is more common than previously thought. Now the key question is whether infection with the Omicron variant will produce better protection against Omicron reinfection, compared with other variants.

Monkeypox virus shows potential to infect a diverse range of native animal species across Europe, indicating high risk of becoming endemic in the region mecRxiv. From the Abstract:

“We highlight the European red fox and brown rat, as they have established interactions with potentially contaminated urban waste and sewage, which provides a mechanism for potential spillback. We anticipate that our results will enable targeted active surveillance of potential spillback event, to minimise risk of the virus becoming endemic in these regions. Our results also indicate the potential of domesticated cats and dogs (latter now confirmed) being susceptible to monkeypox virus, and hence support many health organisations’ advice for infected humans to avoid physical interaction with pets.”

Why Beijing’s war games risk pushing Asean neighbours into the arms of the US South China Morning Post (Furzy Mouse).

Which Asian Countries Support China in the Taiwan Strait Crisis – and Which Don’t? The Diplomat. Handy chart: 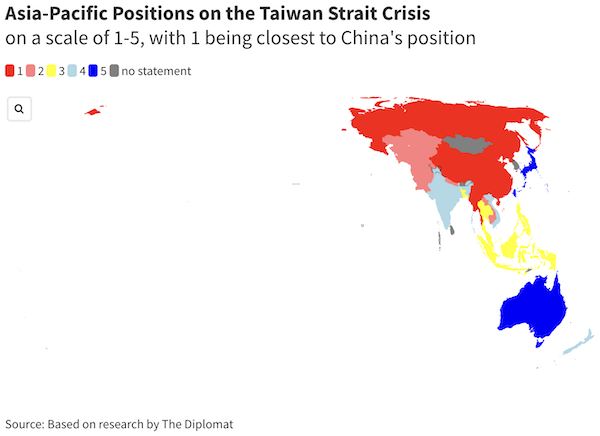 There’s your balance-of-power/containment policy right there, if the United States has the diplomatic and strategic skills to carry it out, a dubious proposition.

Beijing is tanking the domestic economy — and helping the world FT

Not fare: Foodpanda riders dodge soldiers to deliver food and get paid a pittance Frontier Myanmar

The Pretence of Democracy In Kashmir Madras Courier

Ukraine has telegraphed its big counteroffensive for months So where is it?. Politico. It is gone where the woodbine twineth. Meanwhile, attrition?

She is the only woman in a platoon in a company of the 72nd Separate Mechanized Brigade. Now, on an equal footing with men, she's fighting against the Russian invaders in Donetsk Oblast! pic.twitter.com/jQejjGs4Jn

Besides, the whole mishegoss is polling badly:

53% of voters said they support the United States pursuing negotiations to end the war in Ukraine as soon as possible, even if it means making some compromises with Russia. https://t.co/MWiDM4ZyRS pic.twitter.com/ZykXIjMlfS

Ukraine Strikes Again in Crimea, Challenging Russian Hold on Peninsula NYT. No substitute for the offensive we kept hearing about.

Road to war: U.S. struggled to convince allies, and Zelensky, of risk of invasion WaPo. From WaPo’s Ukraine bureau chief.

The timeline of leaked explanations of the raid is mind-boggling. Anonymous officials started by telling us the case was linked to Trump having “delayed returning 15 boxes of material requested by… the National Archives,” then it was “classified documents relating to nuclear weapons,” then it was fear Trump could reveal “sources and methods,” then it was possible Espionage Act violations. By Saturday, former “national security prosecutor” Barb McQuade went on MSNBC to explain the “brilliant tactical move” of using the Espionage Act, since it doesn’t “require the documents to be classified” (we’d been told all week this was about classified material). The next day, CBS published news of a joint FBI/DHS bulletin warning of “armed rebellion,” “civil war,” and a “dirty bomb attack,” and the day after that, we were told FBI “filter agents” did, then didn’t seize, then did again seize Donald Trump’s passports, but returned them in the end.

We’ve seen this movie before.

What are the types of ‘classified’ government documents? Explaining ‘Top Secret’ and more. USA Today

Buy a rural hospital for $100? Investors pick up struggling institutions for pennies NPR

The New Era of Political Violence Is Here The Atlantic

Doctrine for Diplomacy: To Remain Relevant, the U.S. State Department Needs a New Statecraft War on the Rocks. Or statecraft, period, instead of moralizing and then doubling down [rinse, repeat].

our interest is conflict of interest bad cattitude. Light at the end of the tunnel:

"One of the things we've spent a lot of time thinking about in the last many months…is getting us out of that acute emergency phase where the US government is buying the vaccines, buying the treatments, buying the diagnostic tests," Jha said https://t.co/jtmty3uri9 pic.twitter.com/FFi0NO0ogF

Students, graduates, artists oppose the closing of the San Francisco Art Institute: Part 1— “What happens to the human spirit over time?” WSWS 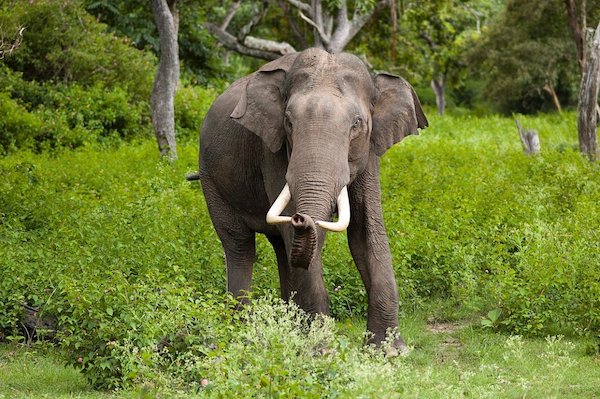 The entire herd crowds round….