This is Naked Capitalism fundraising week. 428 donors have already invested in our efforts to combat corruption and predatory conduct, particularly in the financial realm. Please join us and participate via our donation page, which shows how to give via check, credit card, debit card, or PayPal. Read about why we’re doing this fundraiser, what we’ve accomplished in the last year,, and our current goal, strengthening daily news coverage.

Yves here. As Rebecca Giblin and Cory Doctorow explain in a new book, market concentration and legal practices that lower the power of individuals and small fry have moved the economic balance of power to big players, even in markets where you’d think “talent” would have a lot of bargaining power. Stephen King became a voice against predatory capitalism. From the USA Today summary of his testimony against the proposed merger of Simon & Schuster and Penguin Random House:

“My name is Stephen King. I’m a freelance writer,” King said as he began his sworn testimony as a witness for the U.S. Justice Department….

King’s appearance in U.S. District Court in Washington — highly unusual for an antitrust trial — brought a narrative of the evolution of book publishing toward the dominance of the Big Five companies. As government attorney Mel Schwarz walked King through his history starting as a new, unknown author in the 1970s and his relationships with agents and publishers, King homed in on a critique of the industry as it is now…

King’s displeasure about the proposed merger led him to voluntarily testify for the government.

“I came because I think that consolidation is bad for competition,” King said. The way the industry has evolved, he said, “it becomes tougher and tougher for writers to find money to live on.”…

King expressed skepticism toward the two publishers’ commitment to continue to bid for books separately and competitively after a merger.

“You might as well say you’re going to have a husband and wife bidding against each other for the same house,” King quipped. “It would be sort of very gentlemanly and sort of after you, and after you,” he said, gesturing with a polite sweep of the arm. 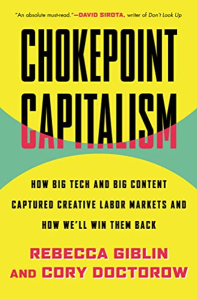 We live among thieves, constantly preyed upon — so constantly, in fact, that it’s almost invisible. Everyone writes these days about the rip-off price of drugs, so let’s look elsewhere. We pay $100 or more per month for Internet and cable service that costs (combined) less than $40 in Europe before upgrades. That’s theft, yet few complain, and when they do, it’s with a voice that pre-accepts surrender.

Most people are familiar with the price of sneakers — from about $125 to $250 or more for a “luxury” pair, unless you shop for discounts. Yet the cost of manufacture in near-slave worker countries is just the cost of materials — perhaps $15 — and by the time shoes get to the U.S., the cost is perhaps $25per pair. The rest of the cost is people with their hand out — brand owners and retailers. And before you hear someone talk about the cost of “jobs” or “wages” in retail or online outfits, consider how low those wages actually are. You’re financing a lot of profit at $250 per pair.

And in the retail marketplace, Amazon, with its half-trillion dollars in revenue each year, is the apex predator of our time, yet Jeff Bezos, the obsessed monomaniac who created it, remains surprisingly popular among the company’s younger victims: 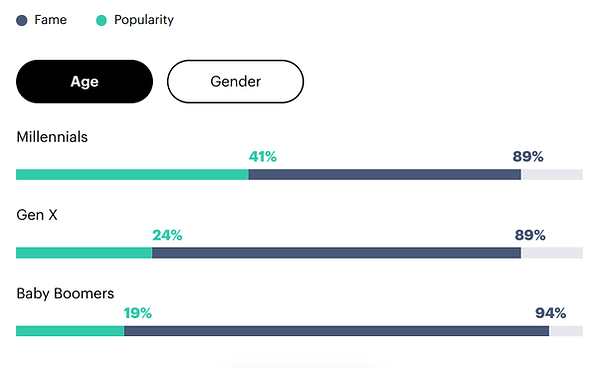 To take another example, this time from the world of TV production, according to Publishers Weekly the creator of the series Cold Case estimates that her agency, one of the largest in the world and an eager acquisitor of its competition, made 94 cents out of every dollar she earned from the show. Yet we admire the climate that makes this kind of conglomeration possible in all industries. 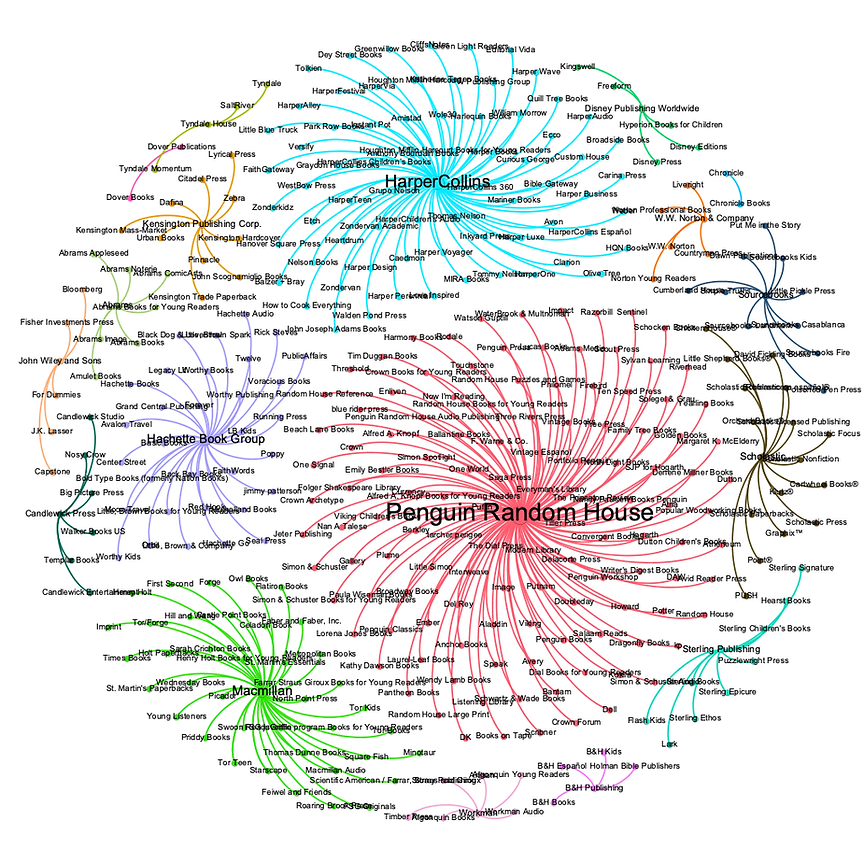 The current state of conglomeration in the book publishing industry (source)

Defying the Devil You Decry

Which brings us to the point of this piece, and one of those places where a comment about the world folds back on the comment itself.

Rebecca Giblin and Cory Doctorow have written a book that takes on the predatory nature of modern capitalism as it impacts what they call “creative labor” markets. We would call this the broad, deep and thickened soup of content we consider “entertainment,” the consumable mental food that serves our leisure.

Chokepoint Capitalism: How Big Tech and Big Content Captured Creative Labor Markets and How We’ll Win Them Back has been written, agented, and sold to a publisher (in this case, Beacon Press, owned by the UU church). It’s printed and will be ready for sale on September 27 from Amazon, or better, from the publisher here.

Yes, it’s available on Amazon. As predatory as Amazon is, they don’t — yet — control all access to hard copy books. Supporting them supports a beast, but there are still other online stores and brick-and-mortar establishments from which to buy.

But unlike Amazon, Audible, an Amazon acquisition, does control almost all access to audiobooks — not just access to the audiobook market but, through its control of that market, to audiobooks themselves.

Audible has a hard and fast rule: if you’re a publisher or writer who wants to sell your audiobook on Audible, you have to let it be wrapped in “Digital Rights Management,” aka DRM: digital locks that permanently bind your work to the Audible platform. If a reader decides to leave Audible, DRM stops them taking the books they’ve already bought with them.Publishers and writers can stop selling their books on Audible, but their readers are unlikely to follow them to another platform – not if that means giving up their expensively-acquired libraries. [emphasis added]

Doctorow has solved that problem by using Kickstarter to finance his own audiobook production. You can read about that effort here.

The Meal That Wants to be Eaten

But it’s an amazing world we live in, isn’t it?

We are the meal that admires the banqueter. We honor thieves who rob us night and day. We see our predators as heroes. We take their pathologies as virtues — what would you call a person who lived solely for money, if that person were your neighbor? — and we teach their very worst practices at our best institutions, like money-hungry Harvard University, itself a study in pathology if you think it through. After all, it took until late last year to convince that school to stop investing in the death of its graduates’ children:

BREAKING: After a decade of constant pressure by students, faculty, and alums, @HARVARD IS FINALLY DIVESTING FROM FOSSIL FUELS.

It’s a massive victory for our community, the climate movement, and the world — and a strike against the power of the fossil fuel industry. (THREAD) pic.twitter.com/56yESznMMY

How do we get out of this mess? How do we find our way home? Giblin and Doctorow have some ideas; their book may be a good place to look for answers. I have other ideas.

How did we get into this mess? That’s a question I hope David Graeber can answer.