This is Naked Capitalism fundraising week. 991 donors have already invested in our efforts to combat corruption and predatory conduct, particularly in the financial realm. Please join us and participate via our donation page, which shows how to give via check, credit card, debit card, or PayPal. Read about why we’re doing this fundraiser, what we’ve accomplished in the last year,, and our current goal, expanding our reach. 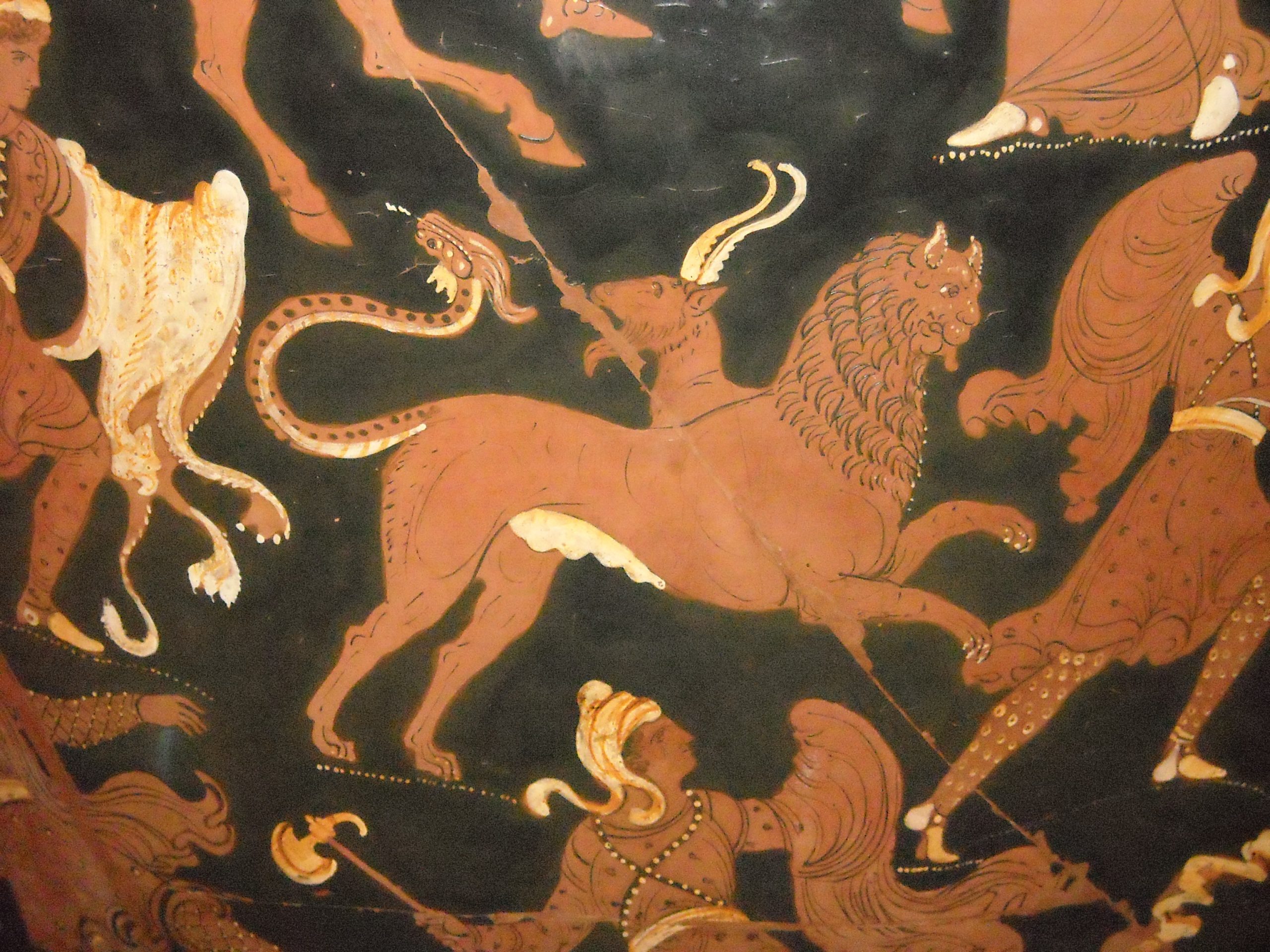 Yves here. This is an intriguing account of Manchin and Sinema got their way with the Inflation Reduction Act.

Steve Fazzari and Servaas Storm’s breakdowns of the Biden administration’s Inflation Reduction Act are acute and persuasive. I think they point inescapably to a striking conclusion: That this flamboyantly contradictory production only looks like a piece of legislation. Really it is a new species of mythical beast – a twenty-first-century counterpart of the ancient Greeks’ fire-breathing Chimera, which notoriously joined the head of a lion with the torso of a goat and the tail of a serpent.

The crossbreeding on display in the Act is at least as eye-catching: Key parts were inspired by the Green New Deal and similar proposals pushed by advocates of strong action to limit climate change. As Storm and Fazzari lucidly explain, many of these provisions mark real advances, even if some, such as the tax credits for Carbon Capture and Storage, are unlikely to help much.

Even these features, though, betray unmistakable traces of more exotic fauna. The bill selectively reorients many progressive notions away from any hint of carbon pricing and avoids strong regulatory decrees. Instead, it emphasizes a dizzying array of investment incentives and tax credits as part of a (successful) strategy to enlist wider support not only from the usual suspects – alternative energy, Silicon Valley, and parts of finance – but also Ford Motor and other manufacturers, utilities, and electrical industry interests. Plus some previously skeptical unions. But the imprint of the Democratic Party’s progressive wing is plain enough.

The same holds for other provisos of the bill, including the corporate minimum tax and the very cautiously hedged opening to allow Medicare at last to bargain with pharmaceutical manufacturers over the prices of a few drugs, though this move likely drew support from some other elements of the medical-industrial complex. The tiny (1%) tax on stock buybacks, adopted at the last minute as a stopgap to plug revenue losses after Democrats close to private equity balked at raising taxes on the masters of the universe, is another instance where the influence of the Party’s progressive wing sticks out, though the rate is unlikely to deter any buybacks at all and signals which interests really won.

But what elevates the new beast to legendary status are the startling features Senators Manchin and Sinema insisted upon as the price for their votes.

As the bill hurtled toward final passage, Sinema held out for deletion of a revenue raising provision Manchin and Senate Majority Leader Schumer had agreed upon that would have slightly tightened up the famous “carried interest” tax loophole. By allowing private equity firms to treat income earned as capital gains instead of ordinary income this trick has long shielded the industry from billions of dollars in tax payments and has become something of a legend as an example of how big money corrupts politics.

Sinema’s brazen hold-up – she was awash in campaign contributions from the sector – can easily be over-interpreted and it was, as major media narratives rushed to portray Schumer as a populist hero challenging Wall Street.[1]

This was ridiculous: not in this Democratic Party. Schumer’s political career stretches through most of the era in which New York was the undisputed financial center of the world and he has long protected the financial industry and its lucrative tax breaks. As The Lever tartly observed, the tiny tax Schumer and Manchin proposed would not have applied to most of the industry’s earnings since firms typically hold investments well past the time cutoff the proposal stipulated for exemption. But the theater greatly enhanced Schumer’s and the Democrats’ image as reformers. With Sinema and many other Democrats, including President Biden himself in the 2020 campaign, all benefitting from private equity largesse, the proposal was quickly and unceremoniously dropped.[2]

Which brings us to the real question about Inflation Reduction Act. The legislation had been lying fallow for the better part of a year. Manchin’s stonewalling had opened up a black hole that threatened to suck down the entire Biden agenda into it. The late July announcement that Manchin and Schumer had suddenly agreed to add a host of generous concessions to oil, gas, and mining interests to the bill and pass a separate measure shortening the time allowed for reviews of proposals for new pipelines and utility connections took everyone’s breath away. Not just the question of why the West Virginia Senator had suddenly relented, but why Schumer and the White House had agreed. Speculation about what changed has run rife ever since.

There is a plain answer: the war in Ukraine’s shattering impact on world energy markets. Few analysts expected a large-scale Russian invasion of Ukraine and almost nobody believed that Ukraine had much prospect of turning one back in the event it happened. When the guns kept booming in eastern Europe, the shock was profound. The threat to Europe’s cheap energy supply was obvious.

Germany, along with most of the rest of Europe, accepted in principle the need to cut back its dependency on Russian energy and started laying plans to find new energy sources over time. It has also reversed long-standing policy by committing to substantial rises in its military budget. Initially, the German government and most of industry and labor insisted that a quick end to all Russian gas imports would be too much of a shock. The consequence would be prolonged stagflation and strong pressures for even more production outsourcing to less expensive countries, including China.

The argument resonated widely in other parts of Europe, including Austria and Italy. In the wake of the spring IMF meetings, where attendees wrung their hands at the challenges posed by inflation for the global economy, especially skyrocketing food and energy prices, along with rising US interest rates, even some American officials signaled that they understood the transition required time.

That was then. Now in the short run, the issue is moot unless the fighting suddenly stops. Russia has reduced the flow of energy to Europe to a trickle. The European hunt for new sources has kicked into high gear. How much and how rapidly liquid natural gas from the United States and Middle Eastern gulf states can really flow into Germany and the rest of Europe is currently the subject of furious speculation and desperate diplomatic maneuvering. Practical questions about ship chartering, export platform availability, and storage possibilities are all involved, but vast issues of geopolitics are front and center.

Joe Manchin and many oil patch spokespersons recognized this virtually from the beginning. They realized that the shocking turn of events offered the United States a rare chance to go back to the future — that is, to recreate a twenty-first-century version of the post-World War II order in which America actively guaranteed energy security in Europe.

As Manchin explained: “Putin’s war in Ukraine must serve as a permanent wake-up call to the international community that we cannot rely upon hostile nations for the free world’s energy security. The only way we’ll be able to guarantee it is to rely on ourselves and our proven partners around the globe.”

Hammering away at the Biden administration for its efforts to rein in new pipeline construction and oil drilling, the Senator contended “that building up domestic natural gas infrastructure would reduce costs, create jobs, and give the U.S. geopolitical power at a crucial time.”[3]

Giving up on the Democrats, Manchin for a while entertained hopes of finding common ground with Republicans, whose attachment to oil ran far deeper than that of most members of his own party.[4] As one news report summarized his thinking at that point: “Manchin, who killed Biden’s more ambitious, $1.75 trillion bill last December, has been privately hinting he prefers to pass any legislation outside of the partisan budget reconciliation process. That means it had to clear a higher bar: 60 votes — with at least 10 coming from the Republicans.”

But that path faced obstacles besides Republican unwillingness to give President Biden anything that looked like a policy success: “Some of his preferred policy prescriptions for energy independence, like approving the Mountain Valley Pipeline, were always in danger of being washed out of a reconciliation bill by a so-called Byrd Bath.” This referred to a quirk of Senate procedures that “allows the Senate parliamentarian to rule if a specific piece of legislation can be considered via the process reserved for budget reconciliation.”

The Republicans proved unyielding. With American oil producers pressing for long-term contracts to protect the gigantic investments that would be required, Germany and other major European countries went shopping for reliable long-term energy sources.[5] Though details are murky, long-term futures prices of natural gas have stayed way up. An authoritative German study of the long-term natural gas market recently leaked in the Frankfurter Allgemeine indicated that by 2030, the United States was expected to fill most of the shortfall created by the Russian gas withdrawal, since only the United States is actually in a position to step up exports of liquid natural gas on the vast scale required.

Eventually, Manchin gave up on bipartisanship. Avoiding threats from the Senate Parliamentarian, he, along with Schumer and the White House, agreed not to discriminate against fossil fuels in the Inflation Reduction Act and to reform the permit process through a separate measure.

A Congressional vote on that measure is imminent. The issues raise a host of urgent public policy questions since it is hard to believe that a vast expansion of fossil fuel production will not have major effects on American efforts to counter climate change. But the short-run needs of Europe and the rest of the world are also very great. That is why a mythical beast as strange as anything the Greeks ever imagined has suddenly materialized at the heart of American politics. It is how the White House and the Democratic Party reorganize to guarantee that the United States remains a dominant exporter of energy from fossil fuels in the midst of the ever-deepening peril from climate change.

[1] The Arizona Senator’s opposition-led also to the removal of another tax on Wall Street from the bill. See the discussion by the Associated Press, “Kyrsten Sinema’s Donations From Investors Surged to Nearly $1 Million in the Year Before She Killed a Huge New Tax on Private Equity and Hedge Funds,” in Fortune.com, August 12, 2022.

[2] Estimates of how much money from private equity flow to Democratic Party candidates in recent elections differ widely in articles discussing Sinema and her colleagues. The subject needs a careful assessment. Virtually all numbers are likely way low. For now, see Thomas Ferguson, Paul Jorgensen, and Jie Chen, “The Knife Edge Election of 2020: American Politics Between Washington, Kabul, and Weimar,” Institute for New Economic Thinking Working Paper No. 169, especially Appendix 5. This presents a very careful estimate for the presidential campaign of 2020. The industry is also heavily represented in the Biden White House, but the topic is too far afield to discuss here as are some important shifts within Democratic primary campaigns in 2022.