Natural Inspiration Science. “Far from being passive vessels at the mercy of their circumstances, organisms can influence evolution directly.”

Beware the ‘Cover Curse:’ How to Tell When a Market Meltdown Is Overdone Bloomberg

‘The tools are getting picked off’: An ever-mutating mix of COVID variants means fewer and less effective treatments this fall Fortune

Why Omicron Might Stick Around NYT. Next two from this article–

Imprinted SARS-CoV-2 humoral immunity induces convergent Omicron RBD evolution (preprint) bioRxiv. “The interaction between convergent evolution of escaping variants and less diversified antibody repertoire would ultimately lead to a highly escapable variants, posing a great challenge to current vaccines and antibody drugs. It could even be worse that infection with the predicted final convergent evolution variants may lead to increased disease severity due to the limited number of neutralizing antibodies elicited immediately after infection. … [O]ur results suggest herd immunity established by natural infection could hardly stop [Receptor Binding Domain (RBD)] evolution and end the pandemic, and vaccine boosters using BA.5 may not provide sufficiently broad protection against emerging subvariants harboring convergent mutations.” I’d be interested to hear what the Brain Trust thinks of these three links.

About those rumors of a “coup” Sinocism. I believe this New York-based account was the epicenter of the rumors, which were all over my Twitter feed for a day or so:

Is #XiJinping Under Arrest After #Military #Coup? 3 Senior Anti-Xi Officials Sentenced to Death
Contradicting conclusions, evidence, & facts regarding Xi's mysterious "disappearing" after he returned to #China
Script at https://t.co/b2m1RBy4lM
Video at https://t.co/IHVGOxrSvf pic.twitter.com/0oenbjfl9B

I thought this was the funniest take:

Putin: Our gas working ok for you buddy?

Xi: Trying it out now man. So far so good

Falun Gong: Xi had been removed from office
🤣🤣🤣 pic.twitter.com/oq2w8hYoTs

Not sure about Falun Gong, though.

What is China really doing in the Global South? The China Project

Here’s the strategy to prevent China from taking Taiwan The Hill. RAND and Brookings.

The Defence Strategic Review: China is not a military threat Pearls and Irritations. Australia.

Hundreds of protesters clash with riot police across London over death of woman, 22, arrested in Iran for breaking country’s hijab laws: At least five cops wounded in demos outside Islamic centres and embassy in UK capital as global fury turns violent Daily Mail

The Exiled Dissident Fuelling the Hijab Protests in Iran Dexter Filkins, The New Yorker. I must say that I’m very dubious when convenient narratives suddenly appear, especially when the evidence is mostly video, especially when we have form with regard to the Axis of Evil, and especially when the narratives confirm the priors of an important Democrat constituency, PMC women. Sadly, however, reverse engineering the truth out of bullshit is very, very difficult. That said, the deck: “Since 2014, Masih Alinejad has published videos of Iranian women removing their head scarves. When a twenty-two-year-old died last week in the morality police’s custody, the country exploded.” Alinejad’s funding over the years: 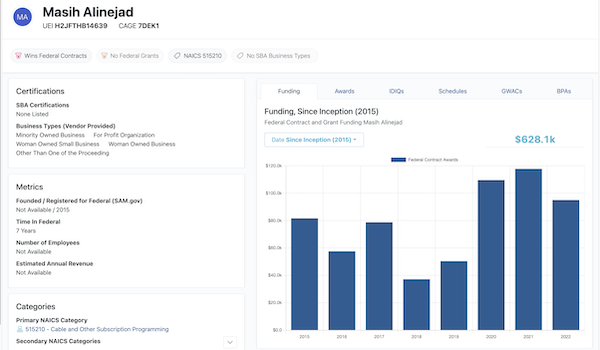 Alinejad is a vendor for Voice of America, US Agency for Global Media, etc. Apparently the vaunted New Yorker fact-checking department missed this detail when the article was first posted, as the correction at the end of the article shows.

Libyan Held at Guantánamo Bay Is Approved for Transfer NYT. The deck: “The move continues the Biden administration’s efforts to reduce the population of the wartime prison and find nations willing to take in the detainees.”

Italy on track to elect most right-wing government since Mussolini Politico. Commentary:

We’re only 7 months into this wretched war, and already the neofascists are back in power in Italy for the first time since Mussolini, and neo-Nazis are in power in NATO’s newest member Sweden. https://t.co/qXuwdyAk9W

The EU is sleepwalking into anarchy Unherd

Berlin Has a Surprising Soft Spot for Its Soviet Memorials Bloomberg

In Ukraine, the US is dragging us towards war with Russia John Pilger, Guardian. From 2014, still germane.

Ukrainians scared by Russia’s preordained referendums AP. Not sure I like the house-to-house balloting much. But I like the prospect of Azovs blowing up a few polling locations even less. And as I’ve said, I’m flabbergasted that Ukraine’s tactic of shelling the Donbas hasn’t proved to be a vote-getter, at least in the Donbas. ‘Tis a puzzlement!

In Ukraine’s South, Fierce Fighting and Deadly Costs NYT. “The Ukrainian government does not usually disclose casualty figures, but the soldiers and commanders interviewed in the past week portrayed the battlefield losses as ‘high’ and ‘massive.’ They described large offensives in which columns of Ukrainian tanks and armored vehicles tried to cross open fields only to be pounded mercilessly by Russian artillery and blown up by Russian mines.”

News from the home front: Russia under conditions of partial mobilization Gilbert Doctorow

Military briefing: How will Russia’s mobilisation affect the war in Ukraine? FT

All the Tsar’s Men Foreign Affairs

Wildly Popular And Under Attack: The Political Battle Over America’s Public Lands HuffPo

FBI misled judge who signed warrant for Beverly Hills seizure of $86 million in cash LA Times. The FBI? Surely not.

U.S. rail agreement was presented as a done deal. Now that they’ve seen it, workers disagree Fort Worth Star-Telegram

I tried replacing Google with TikTok, and it worked better than I thought The Verge. I just installed it. I will say that the onboarding is very easy (and you can search and watch right away easily). I did a search on “N95” and found 3M Aura videos right away, along with fit-testing some duckbills. The results pages wasn’t crapped up with ads, either. OTOH, the short video world is alien to me. But maybe I need to give up the unequal battle…. Waking up doesn’t get better than this I guess, sound on! Two of the 24 elephants at our rescue center chasing birds early this morning. #WFFT @WFFThailand pic.twitter.com/ee9id0Mum1