This is Naked Capitalism fundraising week. 631 donors have already invested in our efforts to combat corruption and predatory conduct, particularly in the financial realm. Please join us and participate via our donation page, which shows how to give via check, credit card, debit card, or PayPal. Read about why we’re doing this fundraiser, what we’ve accomplished in the last year,, and our current goal, rewarding our guest bloggers.

Yves here. It seems weirdly unsurprising that the estimates of the cost of carbon emissions used by the Federal government look to be way too low. After all, we are a big producer of dirty energy sources. Climate change be damned.

More seriously, you’ll notice that the article focuses on using a discounted cash flow model, which is the same approach used by Nicholas Stern in the 2007 IPCC report. He had to use a discount rate of 0.5% to make climate change look dangerous because the models then didn’t show really bad stuff happening before 2100.

Personally, I believe the discounted cash flow approach is all wrong. First, it’s used for making investment decisions when preventing climate change is more like insurance, and people knowingly pay more than the expected value of their odds of loss to avoid catastrophic outcomes. Second, a discounted cash flow model is used to compare competing investments. It’s not as if we have more than one planet to live on (and don’t get me started on Mars, that’s a squillionaire talking point to justify current negligence). But  people would rather have bad metrics than none at all.

By Dana Nuccitelli, research coordinator for the nonprofit Citizens’ Climate Lobby,and an environmental scientist, writer, and author of ‘Climatology versus Pseudoscience,’ published in 2015. He has published 10 peer-reviewed studies related to climate change and has been writing about the subject since 2010 for outlets including Skeptical Science and The Guardian. Originally published at Yale Climate Connections 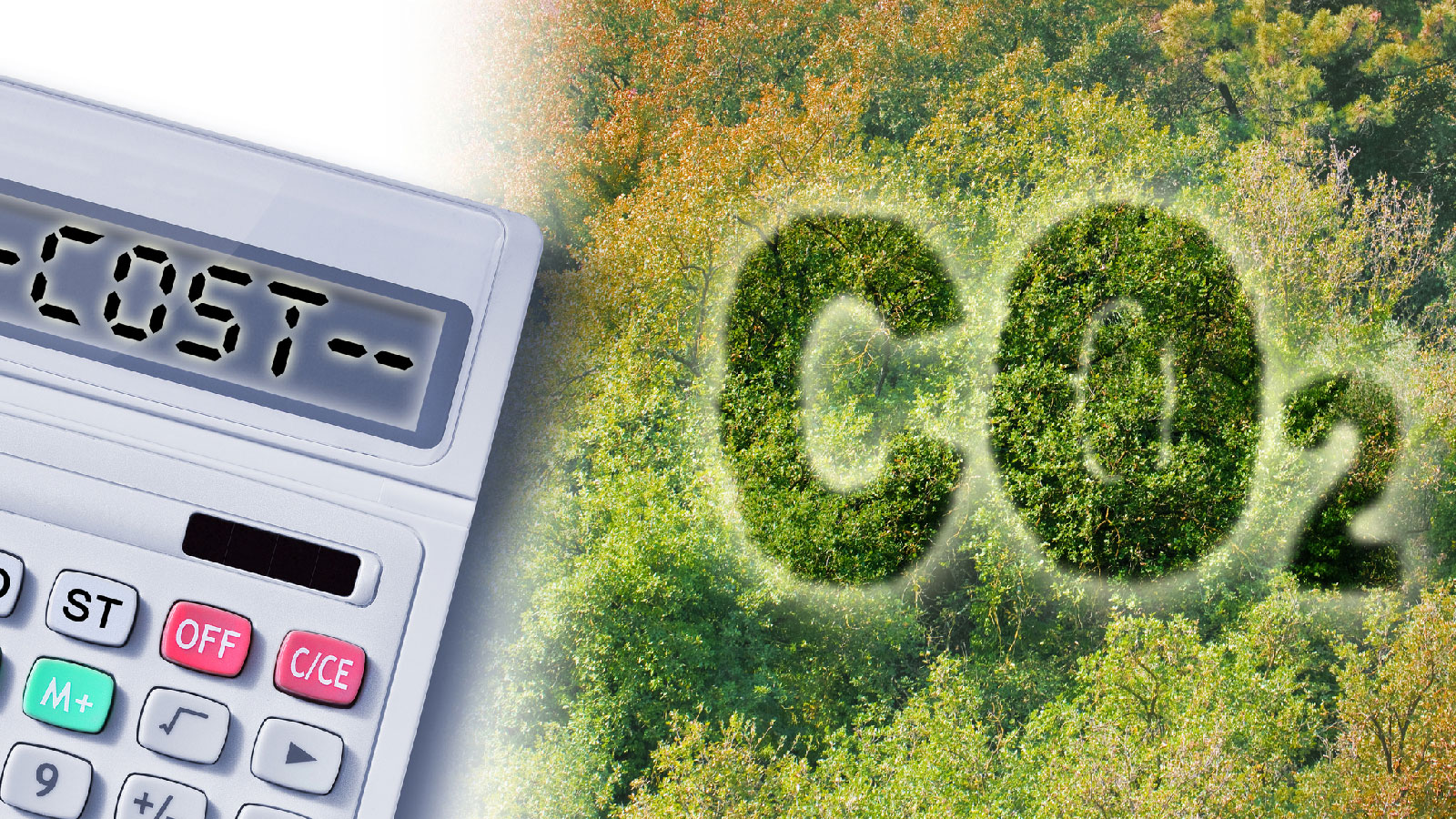 A peer-reviewed analysis by two dozen experts more than triples – from $51 per ton of carbon dioxide to $185 per ton – the federal government’s estimate of the “social cost of carbon” (SCC).

The climate science, economics, and statistics experts’ paper in the prestigious journal Nature updates the best estimate of how much each ton of carbon dioxide costs society as a result of climate change damages. Their conservative best estimate is 3.6 times higher than the $51 value currently used by the federal government, and roughly 30 times more than the value previously adopted by the Trump administration.

It’s a critically important number because federal agencies by law are to consider the costs and benefits of proposed regulations. For climate pollutant regulations, the benefits of future climate damages avoided are estimated via the SCC. A higher value would result in larger benefit-to-cost ratios, justifying more aggressive federal climate regulations.

“It suggests there are many more actions we can take to curb carbon emissions that are going to be on the table that were not on the table before,” Stanford University economist Marshall Burke, not involved in the study, told the Associated Press.

The single largest factor contributing to the increase in the estimated SCC is the “discount rate.” This concept is premised on the premise that wages, the economy, and wealth grow over time – a trend that is expected to continue. Having an extra dollar today that can accumulate interest over time may thus be considered more valuable than a dollar received in the future. But in the case of an intergenerational problem like climate change, a high discount rate can also effectively discount the welfare of people born in the future.

As three of the new Nature study’s co-authors wrote in 2021, the prior 3% choice was based on the average interest rates of U.S. treasury bonds from 1973 to 2003, and is thus outdated. A 2017 brief from the White House Council of Economic Advisors found that based on lower interest rates in recent decades, the discount rate should be revised to about 2%. A 2018 study also found “a surprising degree of consensus” for a 2% discount rate in a survey of more than 200 publishing academics.

This one change – revising the discount rate from 3% to 2% – by itself more than doubles the estimated SCC. How so? Because the bulk of climate damages occur decades in the future, and so discounting the value of future climate damages can significantly suppress estimates of the SCC. Using a 2% discount rate, the study finds with 90% confidence that the SCC is between $44 and $413, with the best estimate pegged at $185 per ton.

The Trump administration had moved in the opposite direction, using discount rates of 3% and a whopping 7% in its efforts to dramatically lower the estimated SCC to near-zero.

As recommended by the 2017 National Academy of Sciences report, the authors of the new Nature study also incorporated updated research regarding damages from four categories of climate change impacts: premature deaths caused by extreme heat, impacts on agricultural yields, energy use in response to temperature changes, and sea-level rise encroaching on coastlines. The former two impacts dominated the climate damage estimates, with heat-related mortality and reduced crop yields each accounting for nearly half of the total climate costs. 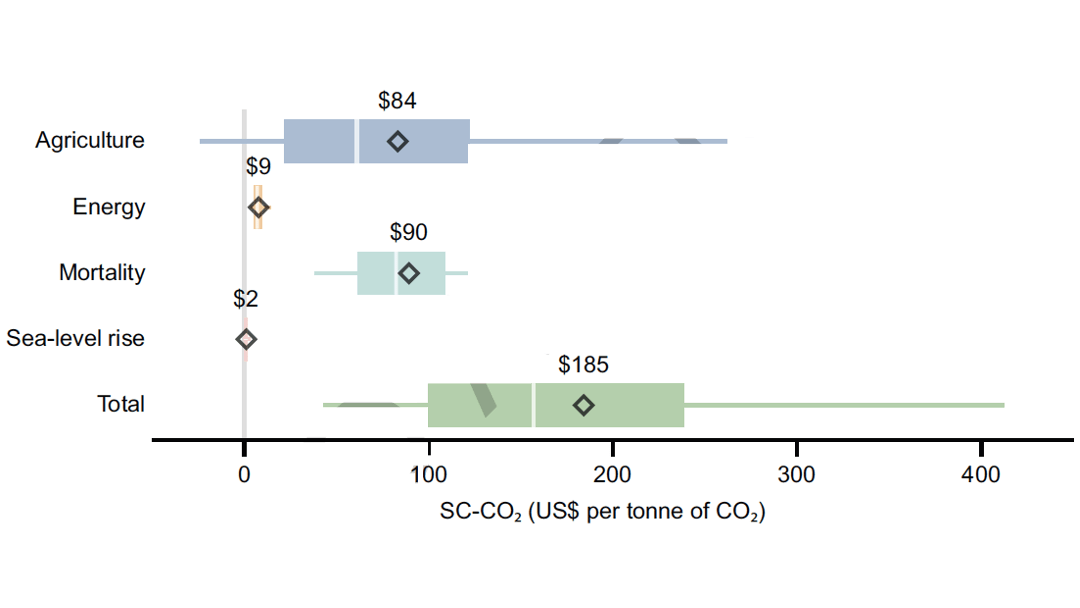 The Nature study authors projected that net building energy use changes would result in relatively low costs based on a 2018 study. The explanation: While summer cooling demand increases in response to rising extreme heat, demands for in-door warming decrease as the world warms.

The authors also projected sea-level rise damages to be relatively small, based on a 2016 study that evaluated the most cost-effective way each region could adapt to rising seas through a combination of coastal retreat and investments in coastal defenses like sea walls. But that calculation assumes every country will adapt optimally, and does not account for the psychological and cultural losses associated with abandoning homes and other resources that are swallowed by the sea. The study found that a lack of optimal adaptation would increase sea-level rise costs by as much as a factor of seven.

The Nature study based agricultural costs on a 2017 study that incorporated more than 1,000 recently published estimates of staple crop yield responses to changing temperature, rainfall, and carbon dioxide levels. The authors found that corn, wheat, soy, and rice yields are all projected to decline in hotter global temperature scenarios.

Finally, they based heat mortality costs on a 2022 study that evaluated recent research on a broad set of heat-related health outcomes, including cardiovascular, respiratory, and infectious disease categories. One complication in this category involves having to translate an avoided premature death into a monetary value. Researchers approach this question by evaluating how much people would be willing to pay to reduce their risks of premature death in a given year. Heat mortality costs are thus not direct impacts on the economy, but rather the monetary value people place on living longer, healthier lives as a result of their being subjected to fewer punishing extreme heatwaves.

The Nature study authors report that these updated climate damage assessments would increase the SCC by almost 60%, although the revised discount rate is the primary factor behind its more than tripling to $185 per ton.

Why This Is Still a Conservative SCC Estimate

The study authors did not incorporate numerous other extreme climate damages such as worsening wildfires, droughts, inland floods, hurricanes, food and water insecurity, the mass migrations that such disasters could trigger, or the resulting suffering and trauma that are difficult to quantify in monetary terms. Even the costly crop yield loss estimates include just four major staple crops that account for 20% of global agricultural production. As study co-author Frances Moore noted on Twitter, “There is still a lot missing from that list” of modeled climate damages.

Additionally, a lower discount rate could be justified, for example if climate damages slow economic growth. Or perhaps future generations would prefer to sacrifice some monetary wealth in exchange for a world with less extreme weather disasters and a stabler climate. The Nature study estimated that applying a 1.5% discount rate would raise the SCC to more than $300 per ton.

The Biden administration’s updating of the federal SCC was temporarily derailed in February by a lawsuit brought by several Republican attorneys general, but their challenge was thrown out a month later by a federal appeals court. The interagency working group performing the update may take the results of the new Nature study into account.

The revised federal SCC, which is expected to be published soon, is anticipated to significantly increase the value from the current $51 per ton, and may yield an estimate similar to that in the Nature study. As the new paper’s authors wrote, such an action would justify stronger federal regulations on climate pollutants: