This is Naked Capitalism fundraising week. 990 donors have already invested in our efforts to combat corruption and predatory conduct, particularly in the financial realm. Please join us and participate via our donation page, which shows how to give via check, credit card, debit card, or PayPal. Read about why we’re doing this fundraiser, what we’ve accomplished in the last year,, and our current goal, expanding our reach.

Yves here. Earlier in the week, we posted an article from John Helmer on Russia’s plans to develop, or perhaps more accurately ramp up, domestic aircraft production. Readers had a robust debate, with some arguing that Russia would never get there, and certainly could not compete with Airbus and Boeing. Others said they’d actually flown on Russian planes. They weren’t a plush ride but they did get from point A to point B.

So it’s an open question as to how far Russia might get and how long it will take to build a domestic commercial fleet. And they are unlikely to attract much in the way of foreign buyers. But remember, no one thought Japanese could ever build cars that would be globally competitive in the 1960s. But Russia may not be that ambitious over a long time frame, and in particular, they may not have the inclination to cater to fussy customer/passenger requirements.

By contrast, Helmer’s article on the Russian comedy industry argues that on a current basis, sanctions have helped not just domestic content producers but even broadcasters. 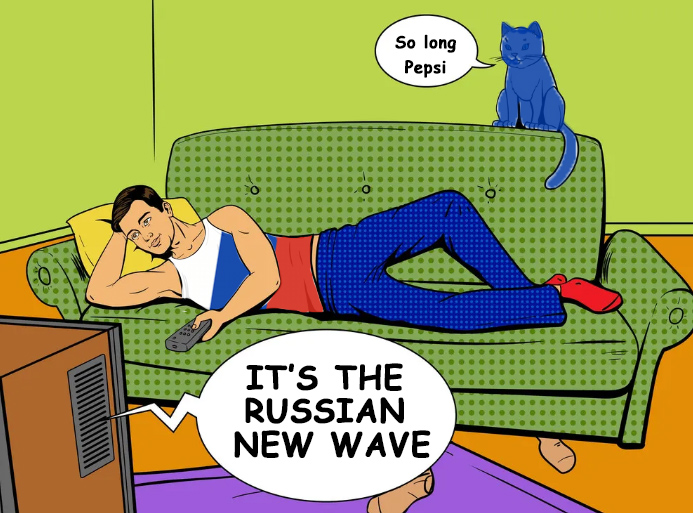 With seven hundred wives and three hundred concubines, Solomon realized he was the inventor of the situation comedy. If not for the sitcom as his medicine, the bodily and psychological stress Old Solly had to endure in the bedroom would have killed him long before he made it to his death bed at eighty years of age,  after ruling his kingdom for forty of them.

After the British sitcom died in the 1990s, the subsequent stress has not only killed very large numbers of ordinary people. It has culminated today in a system of rule according to which a comic king in Buckingham Palace must now manage the first prime minister in Westminster  history to be her own joke.

Even the Norwegians, the unfunniest people in Europe, have acknowledged that the only way to attract the British as tourists, was to pay John Cleese of Monty Python and Fawlty Towers to make them laugh at Norway itself.   This has been a bigger success for the locals than for the visitors, boosting the fjord boatman’s life expectancy several years ahead of the British tourist’s.

In fact, Norwegian scientists studying a sample of 54,000 of their countrymen have proved that spending the state budget on public health and social welfare will only work effectively if the population is laughing all the way to the grave. “The cognitive component of the sense of humour is positively associated with survival from mortality related to CVD [cardio-vascular disease] and infections in women and with infection-related mortality in men” – Norwegian doctors reported in 2016. Never mind the Viking English:  the Norwegian point is the same as Solomon’s that “a sense of humour is a health-protecting cognitive coping resource” – especially if you’ve got cancer.

The Russians understand this better than the Norwegians or the British.  Laughter is an antidote to the war propaganda coming from abroad, as Lexus and Vovan have been demonstrating.   The Russian sitcom is also surviving in its classic form to match the best of the British sitcoms, all now dead – Fawlty Towers (d. 1975), Black Adder (d. 1989), You Rang M’Lord? (d. 1988), Jeeves and Wooster (d. 1990), Oh Dr Beeching! (d.1995), and Thin Blue Line (d. 1996).

The Russian situation comedies, alive and well on TV screens and internet streaming devices across the country, are also increasingly profitable business for their production and broadcast companies – not despite the war but because of it. This has transformed the Russian media industry’s calculation of profitability by removing US and European-made films and television series, as well as advertising revenues from Nestlé, PepsiCo, Mars, and Bayer. In their place powerful  Russian video-on-demand (VOD) streaming platform companies like Yandex (KinoPoisk), MTS (Kion),  Mail.ru (VK), and Ivi (Leonid Boguslavsky, ProfMedia, Baring Vostok)  are now intensifying the competition for audience with traditional television channels and film studios for domestic audiences.  The revenue base of the VOD platforms is less vulnerable to advertisers, more dependent on telecommunications subscriptions.

Russian script writers, cameramen, actors, designers, and directors are now in shorter supply than ever before, and earning more money.  “It’s the Russian New Wave,” claims Olga Filipuk, head of media content for Yandex, the powerful leader of the new film production platforms; its  controlling shareholder and chief executive were sanctioned last year.

The stock characters of the situation comedy are more or less the same across Europe and North America — in-laws, girlfriends, boyfriends, policemen, schoolmates, co-workers, petty criminals. The ideology is profoundly different, and thus the point of the comedy, the laugh lines. This contrast is now sharpening as American influence, which took over Russian media during the Yeltsin period, is erased. This revolution in mentality is replacing the Yeltsin generation; they are the ones now advertising their opposition to the Kremlin  in New York, Paris, and Berlin. They are out of work; their replacements in Moscow are capitalising on their departure.

Turning sitcom plots into laughs is difficult; sustaining the audiences at constant quality over years is almost impossible.  The best of the British ones were able to sustain the inventiveness for no more than two or three seasons. Those British sitcoms which have lasted for much longer – Hi-de-Hi, for example, an early creation of the authors of You Rang M’Lord? and Oh Dr Beeching!,  lasted for eight seasons, 1980-1988, while Fools and Horses  ran for seven seasons; Dad’s Army for nine; Steptoe and Son for eight.  Doc Martin has been running for nine, with a final tenth still to come, but the series stopped being a comedy half-way through.

The leading Russian television channels which produce comedy series are CTC (in Cyrillic STS) owned by the National Media Group, and  TNT owned by Gazprom Media.    TNT holds 100% of the rights to comedy series made by Comedy Club Production  and shares rights with TNT to shows by Good Story Media . By the end of 2021, TNT was reporting that it had increased the number of new shows or premieres, and was drawing modest increases in both its young and middle-aged audiences. Increasing comedy was the key to audience growth, TNT announced.

Audience rating websites agree that the most popular domestic comedy series for 2021 were: Vacation , Girls with Makarov, Vampires of the Middle Lane, Al-Kapotnya, Happy End , Two , and Policeman from Rublevka.

Top: Vampires of the Middle Lane; bottom – Girls with Makarov; Al-Kapotnya; and Policeman from Rublevka.  Al-Kapotnya is a play on words, combining Al Capone and Kapotnya, a district of southeastern Moscow with a reputation for criminal gangsterism like Chicago’s Southside when Capone controlled it.

The rapid growth of video streaming has transformed the domestic media industry in just two years, triggering a rapid increase in demand for new film series while the number of writers, directors, actors,  and technicians has remained the same. This has helped double the rates of their pay, according to Olga Filipuk  who runs KinoPoisk (“Film Search”) for Yandex. “The online platforms have changed the TV series production market,” she says. “Three or four years ago, the series were ordered only by the big TV channels, and the producers depended on the moods or tastes of their managers.”

“If you had a historical series,” adds Sergei Kornykhin,   an independent Moscow film producer, “you could take it to Channel One or VGTRK. A comedy series, if it’s complicated, that was TNT. If it was family oriented, that’s CTC.  You were given a price, and you worked within that.”  US media industry publications didn’t begin to notice the transformation of the Russian media industry until mid-2021, two years after the revolution had begun in Moscow. For example, between  June and September of last year Yandex launched this PR campaign for its video-on-demand (VOD) streaming platform unit KinoPoisk: https://variety.com/  and  https://www.screendaily.com/  and click. 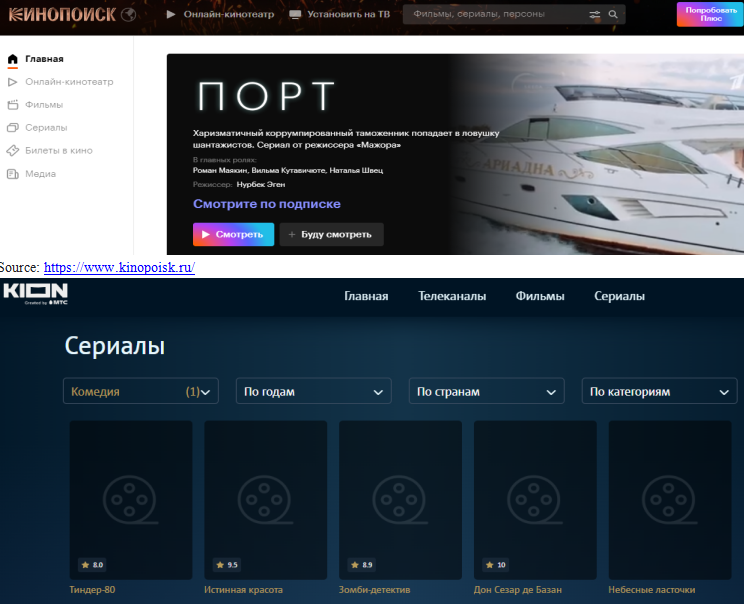 THE MOST POPULAR SERIALS ON RUSSIAN ONLINE PLATFORMS, FIRST HALF 2021 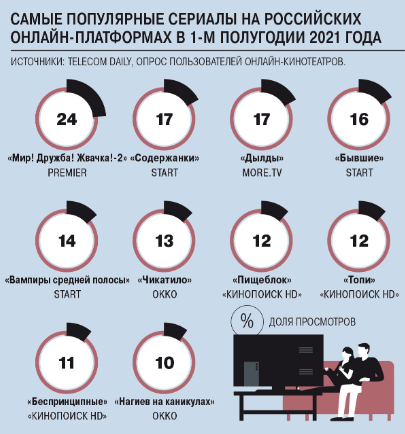 The numbers indicate the percentage for each serial selected by measured VOD audience; title in bold; the platform brand in caps. Source:  https://www.kommersant.ru/

One consequence of the growth of demand for films and the shortage of people to make them has been a sharp increase in student demand for film schools. Western media have been reporting the exit abroad of Moscow media personalities, television presenters,  and reporters; they have failed to notice the boom in applications to the Moscow Film School (MHSK) and a dozen other television production and film training institutes; the latter far outnumber the former, and will shortly replace the Yeltsin media generation entirely. Kinopoisk and the National Media Group are subsidizing the new trainees and the schools.

The immediate pressure from the production companies for broadcast content and the overfilled order books at the studios mean that, as one TNT producer has commented, “everyone who is able to roll a camera is busy. There is simply nowhere to put a new billion dollars of investment. For the time being, the investments already made by the players are outstripping the income they receive, so now is the time to experiment with new niches and sub-genres, and new investments are possible.” New investment is being held back by the big corporations already engaged until the subscription lists for their platforms reach a stable level of 10 million, industry sources calculate.

At that point, investors will be more confident of investment payback. That’s when everyone will start laughing all the way to the bank.