Yves here. Neuburger here has not yet reached the point where he discusses the Graeber and Wengrow ‘Dawn of Everything’ in detail. However, this piece focuses on a central issue: the length of time that human pre-history represents (nearly all of at least 200,000 years) and how little we know about most of it.

Unfortunate, thin knowledge lends itself to projection and romanticization, such as from Jean-Jacques Rousseau, charged a not entirely fairly with promoting the “noble savage”. From Wikipedia:

According to Rousseau, as savages had grown less dependent on nature, they had instead become dependent on each other, with society leading to the loss of freedom through the misapplication of perfectability. When living together, humans would have gone from a nomadic lifestyle to a settled one, leading to the invention of private property. However, the resulting inequality was not a natural outcome, but rather the product of human choice.

It remains an open question as to why there was so little “development” in modern terms, for so long, and then what amounts to technology exploded. My understanding is that human advantages over other species and their environment includes: opposable thumbs, language (which allows for much more complex forms of social interaction, cooperation, and information exchange) and interestingly, endurance. On the latter, recent research argues the reason humans were effective game hunters despite being slow and weak is that they would pursue large prey until they had exhausted it. 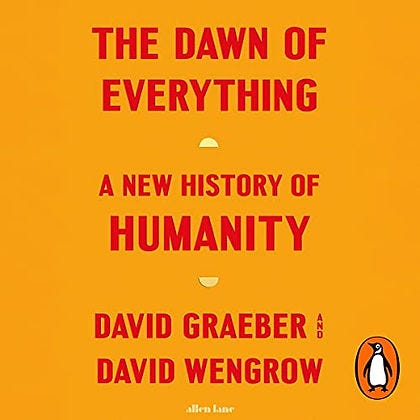 “What a Chimera is man! What a novelty, a monster, a chaos, a contradiction, a prodigy! Judge of all things, an imbecile worm; depository of truth, and sewer of error and doubt; the glory and refuse of the universe.”
―Blaise Pascal, Pensées

“In the end, climate change is the only story that matters.”
—Charles Pierce, Esquire, September 24, 2022

As I promised here, this is the start of a series, hopefully a long one, though one that I will keep light. That is, I’ll likely have a lot to say — I’m less than halfway through the book and I already have a lot to say — but I’ll keep most of these pieces relatively brief so I can focus, with you, on one observation at a time.

This series will consist of glosses on my reading and thoughts about Graeber and Wengrow’s The Dawn of Everything, and it will take the shape of a considerably down-rev version of Blaise Pascal’s Pensées. These thoughts will have a theme, and they will lead, I’m certain, to a number of certainties. After all, it was Pascal who wrote, “It is not certain that everything is uncertain,” and I’m certain he was right. (Whether we’ll find that certainty for our own individual selves, and in time to matter, is a separate issue.)

So let’s begin, first by honoring one of the authors, David Graeber. For a little independent reading, his Wikipedia entry is a good place to start. Note especially the comment on his first major book, Debt: The First 5000 Years, which has been called “the most read public anthropology book of the 21st century.”

Note his activism, and especially his role in the Occupy Wall Street movement, which Graeber himself called “the opening salvo in a wave of negotiations over the dissolution of the American Empire.” Whether you agree or not, the fact is that Graeber himself agreed, which should give you a sense of how far out of the conventional box his thinking went, and how far his thinking reached into past and future. “The dawn of everything” is as far into our past as you can get. The “dissolution of the American Empire,” sans extreme disruption, is hard to imagine happening anytime soon.

By the way, Debt: The First 5000 Years is a hell of a book if you want to know what money and debt really is. Like all of Graeber’s books, it’s a remarkably easy read. Even in audio book form, it’s a delight.

‘The Dawn of Everything’

The Dawn of Everything opens with a short introduction penned by Wengrow. I invite you to read it through:

David Rolfe Graeber died aged fifty-nine on 2 September 2020, just over three weeks after we finished writing this book, which had absorbed us for more than ten years. It began as a diversion from our more ‘serious’ academic duties: an experiment, a game almost, in which an anthropologist and an archaeologist tried to reconstruct the sort of grand dialogue about human history that was once quite common in our fields, but this time with modern evidence. There were no rules or deadlines. We wrote as and when we felt like it, which increasingly became a daily occurrence. In the final years before its completion, as the project gained momentum, it was not uncommon for us to talk two or three times a day. We would often lose track of who came up with what idea or which new set of facts and examples; it all went into ‘the archive’, which quickly outgrew the scope of a single book. The result is not a patchwork but a true synthesis. We could sense our styles of writing and thought converging by increments into what eventually became a single stream. Realizing we didn’t want to end the intellectual journey we’d embarked on, and that many of the concepts introduced in this book would benefit from further development and exemplification, we planned to write sequels: no less than three. But this first book had to finish somewhere, and at 9.18 p.m. on 6 August David Graeber announced, with characteristic Twitter-flair (and loosely citing Jim Morrison), that it was done: ‘My brain feels bruised with numb surprise.’ We got to the end just as we’d started, in dialogue, with drafts passing constantly back and forth between us as we read, shared and discussed the same sources, often into the small hours of the night. David was far more than an anthropologist. He was an activist and public intellectual of international repute who tried to live his ideas about social justice and liberation, giving hope to the oppressed and inspiring countless others to follow suit. The book is dedicated to the fond memory of David Graeber (1961–2020) and, as he wished, to the memory of his parents, Ruth Rubinstein Graeber (1917–2006) and Kenneth Graeber (1914–1996). May they rest together in peace.

If you think about it, about the process by which The Dawn of Everything was written, the work is a kind of secular “Pascal’s Pensées,” but this time not left in fragments, but brought to completion — a series of nuggets, reflections and ideas, that connect its fragments to a whole. If you read it along with me, you’ll understand what I mean. The structure feels seamless, yet the pieces, the nuggets, are interesting on their own.

Nugget 1: The History of Man

That said, the first thought I’d like to bring to your attention is this, from the opening of Chapter 1:

Most of human history is irreparably lost to us. Our species, Homo sapiens, has existed for at least 200,000 years, but for most of that time we have next to no idea what was happening. In northern Spain, for instance, at the cave of Altamira, paintings and engravings were created over a period of at least 10,000 years, between around 25,000 and 15,000 bc. Presumably, a lot of dramatic events occurred during this period. We have no way of knowing what most of them were.

The authors immediately discuss why people don’t think of these things, or what they do think when they do think of them, which leads most people to ask questions about the inherent goodness or wickedness of mankind in general.

“Are humans innately good or innately evil?” we ask ourselves when looking at our presumed myth-shrouded past. Graeber’s comment on that question — are humans good? — is worth quoting, as a kind of nugget 2 for this piece:

[I]f you think about it, the question, framed in these terms, makes very little sense. ‘Good’ and ‘evil’ are purely human concepts. It would never occur to anyone to argue about whether a fish, or a tree, were good or evil, because ‘good’ and ‘evil’ are concepts humans made up in order to compare ourselves with one another. [emphasis added]

As tempting as it may be, however, let’s not linger here, but look again at the initial point about the loss of human history. We’re brought to a surprising conclusion.

One Past or Two? One Being or Two?

We often think of our story, the story of our species, as having two parts — “history” and “prehistory.” This bifurcation allows us to think very vaguely, to cloud our minds almost completely about all that happened to our species prior to the use of writing, some 3400 years ago. It allows us to think of ourselves, not just as having two pasts (which we haven’t), but also as being two beings (which we aren’t).

What if we have just one past instead, part recorded and part not? If so, and if we do the math (3400 divided by our 200,000 years on earth), we reach a striking conclusion: 98% of all human history has been lost. 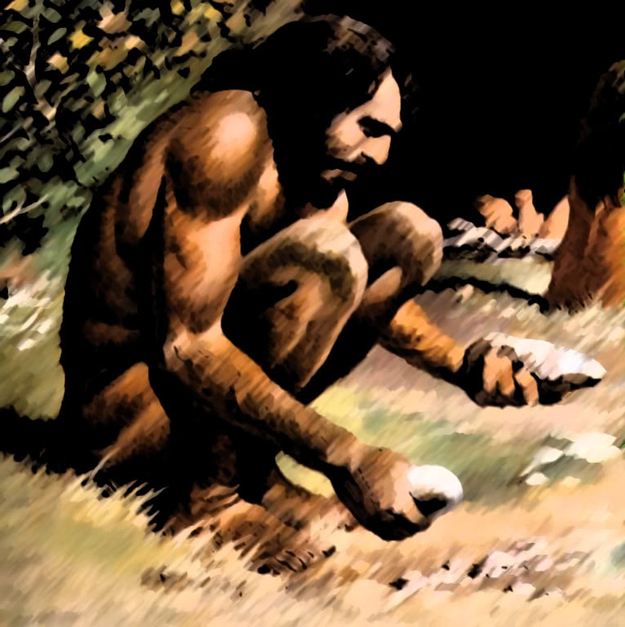 What are your assumptions about this man? How smart is he? How self-aware?

And if our “prehistory” is just history unrecorded, what does it say about us as beings? Is there any reason to think “prehistoric” versions of ourselves are different from modern ones?

The Road Into Our Past Leads to Our Future

What we do know is this — our species has lived for 200,000 years, and today we understand 2% of it. What’s in the rest of the story? Because it’s certainly true that the stories we believe about our past will influence our view of the future our billionaires are relentlessly marching us to, its possibilities, even its benefits. On the day that climate trumps all, who will we be? Perhaps we’ll become what we’ve been. 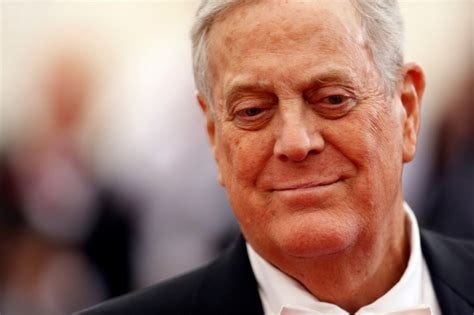 That’s why I’m taking this lingering book-club journey, and I invite you to take it with me. Put your prejudices and pre-conceived notions aside and look at the data an anthropologist like Graeber can unearth. We might then, with Blaise Pascal, be able to say, “Il n’est pas certain que tout soit incertain” — it’s not certain that everything is uncertain.

Is modern capitalist man the inevitable end of social evolution? Many believe it is. Or is our current culture merely a choice, and a bad one, a choice that somehow went global?

What can we learn by looking with an anthropologist’s eye at all of human history, and not just the part in which hierarchies of power and wealth began to proliferate?

Who, in fact, are we? Who will we become. That’s what this is about.