Yves here. Tom Neuburger has a short post with Twitter Files updates, plus evidence that Google is obstructing searches that ought to lead to his site.

In a bit of synchronicity, I stumbled upon another Google gimmick for messing with search results. I had seen a tidbit on Interfax that is relevant to a new John Helmer post, wanted to include it in an introduction, and so went to find it.

This is what I got: 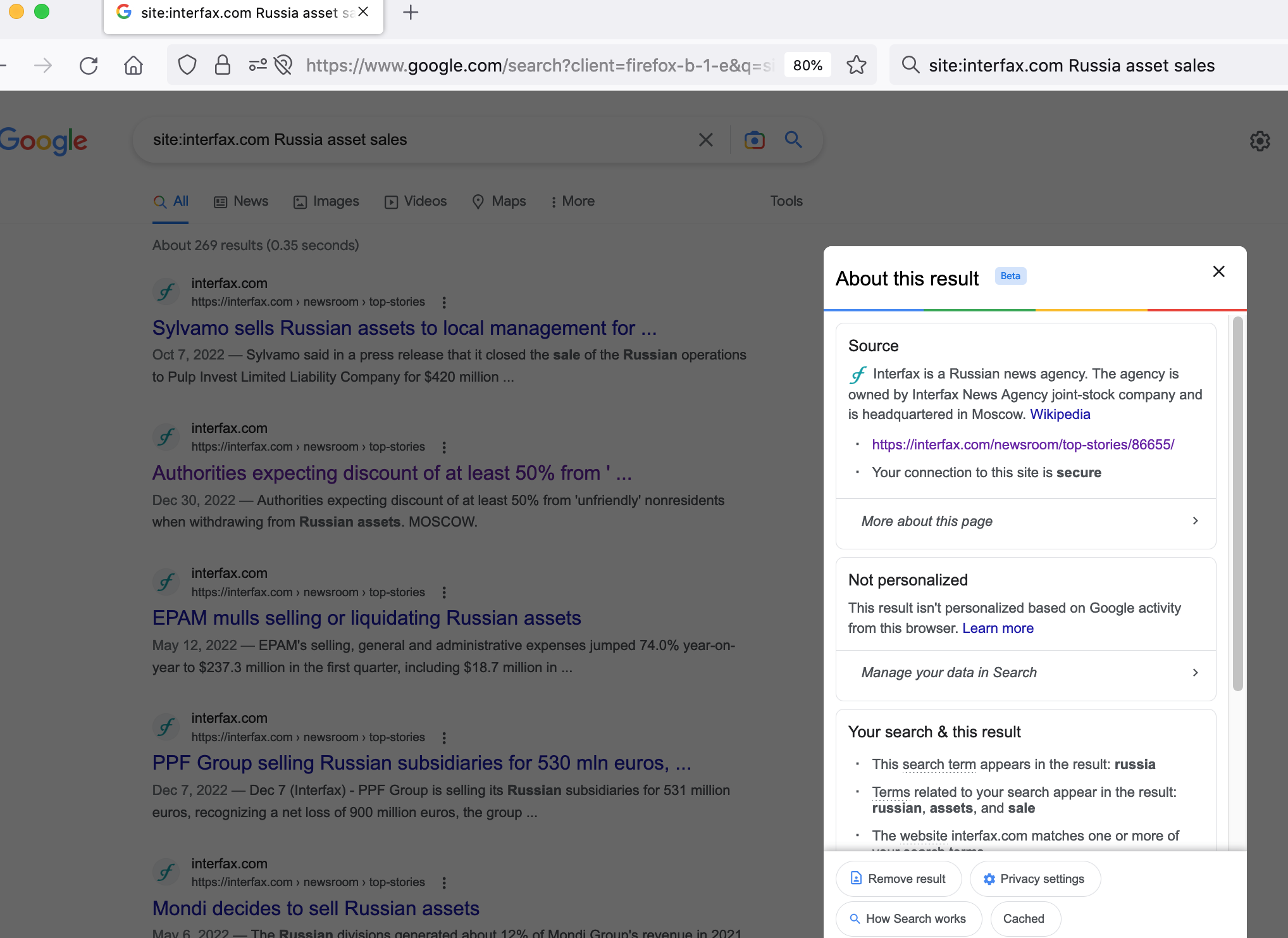 I had not clicked on anything. If you have very good color vision, you might be able to detect that the second title is a tiny bit pinker than the others. That is the one I had looked at earlier. That behavior holds across all searches. I don’t know why Google has implemented a barely perceptible color difference. We have a very clear color difference for read v. unread links at Naked Capitalism.

But that is not the striking part. Google has subjected me to a feature in beta telling me Interfax is Russian. I tried the same search with site:washingtonpost.com and got no such interference.

This is what you see when you move the scroll bar down: 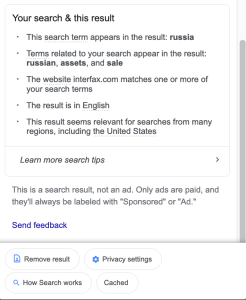 Moreover, in the bottom field, immediately elow “Send feedback,” you see “Remove result”. So at a minimum, it looks as if Google is hoping you’ll remove sites it deems unsanitary from your search results.

Now based on this surprise, my surmise is Google is doing this only to Russia sites. But I wonder how and when this started. I have sometimes used Google to search en.kremlin.ru, since its search function isn’t very good; Firefox remembered those searches and Google did not put up an interfering warning when I ran one of those old queries again just now.

I would be very interested to hear from other readers who have gotten similar results. And yes, Google is terrible but Bing is pretty similar and I have not found Brave or DuckDuckGo to be much better. Qwant is also a disappointment. Yandex give much better first pass results but does not have date or date range filter, so most of the time when I try Yandex, I wind up back at one of the bad boys.

This week has seen a number of developments, including the release of four new Twitter Files, several of great significance.

The final file, by Lee Fang, is especially troubling. It documents how Pfizer and BioNTech attempted to use Twitter to protect its profit from the activist campaign to get them to make their vaccines available free or at low cost to developing nations, especially in the Global South.

From his Intercept write-up:

The campaign they were concerned about was the launch of an international push to force the drug industry to share the intellectual property and patents associated with coronavirus vaccine development. Making the patents available, in turn, would allow countries across the world to swiftly manufacture generic vaccines and other low-cost therapeutics to deal with the ongoing pandemic. [emphasis added]

That’s evil in its purest form — choosing profits over people whose lives are at risk — with Big Pharma caught choosing its profits and consigning many brown-skinned others to death.

In the meantime, I have updated this file (“Twitter File Links, Aggregated”) with links to the above Twitter Files (along with a few comments), and will continue do so whenever a new file is released. It will always be up to date, so feel free to bookmark it.

Finally, Google may be getting into the content-flagging act. As you know, I’ve been covering the Twitter Files pretty extensively. If you search on my name, “thomas neuburger”, and narrow the search to include only “Previous week”, you see this flag ahead of the results:

Changing the filter to “Past month” removes the flag. Is this meaningful? I don’t know. But asking if I’m “trusted on this topic” is worrying.

I’ll have my own Twitter tale to tell, perhaps, if I can find data to support my suspicion. But for now, if you get the same result from a Google search, please let me know, either in the comments or by email.

Thanks again to you all. More soon.