If you believe in technical analysis, when a commodity or security price falls below a “support level” it will continue in the same direction until it finds a new (lower) support level.

Even if you don’t subscribe to this school of thought, it is surprising and likely Not Good that the dollar is falling. One would expect the dollar to appreciate or at least stabilize after the Fed released the minutes of its last FOMC meeting, which made it clear that the Fed still has a tightening bias. The prospect of higher, or at least not lower rates, ought to bolster the currency.

So currency traders seem to be giving a vote of no confidence in the Fed, or the US economy, or both.

This chart comes from Jeff Saut, which we found via Barry Ritholtz’s The Big Picture: 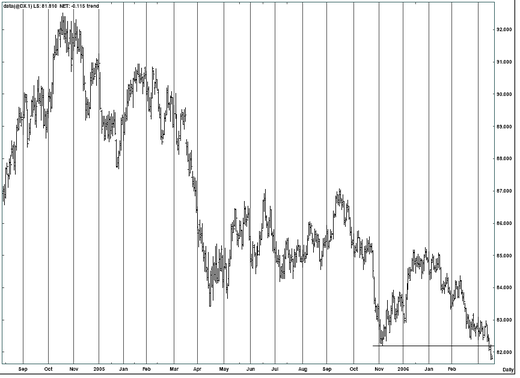