That’s the bottom line of a smart and scary bit of analysis by Michael Shedlock of “Mish’s Global Trend Analysis.” And it confirms, even more dramatically than we imagined, the large and growing gap between the Fed’s reputation and its real power.

The Fed is a close cousin to the Wizard of Oz. It hides its activities behind a veil, makes forceful and authoritative pronouncements, and is regarded with fear and awe. But its real clout rests on its abilty to maintain belief in its influence, for its sway is actually quite limited.

The Fed does have considerable authority with respect to the regulation and oversight of member banks. But banks are increasingly marginal players in financial intermediation and the capital markets. The biggest development in finance since the early 1980s is the shift of lending and other credit extension away from the banking system to various markets, both domestic and overseas. Suddenly, you’ve gone from a dominant regulator to a host of regulators who collect data differently, have different concerns, and varying powers. And important players, namely hedge funds and mortgage brokers, are subject to little in the way of regulation and reporting.

Now in addition to assuring the stability of the banks, which as we discussed, is less and less important in providing for the safety of the financial system, the Fed is also responsible for the soundness of the currency. Here too the Fed has limited scope. It has influence only over the money markets, via setting the Fed funds rate, and by its open market operations, which permit it to add to or withdraw from the money supply. And as Shedlock’s post indicates, even these activities appear ineffective.

He makes another important point towards the end of his post, namely, that despite considerable money supply growth, which the Fed has been unable to staunch, economic activity has been slowing. This points to underlying economic conditions that are very weak. In particular, he predicts that this current wave of LBOs will lead to a lot of bankruptcies (gee, haven’t we seen that movie before, as in the late 1980s?). Indeed, he’s the first sober analyst I’ve seen to use the word “hyperinflation” as a possible outcome. Let’s hope he’s wrong, but his work is persuasive. 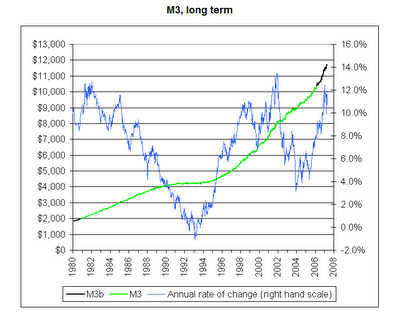 So money supply is soaring … Right? Not so fast. Let’s take a look at M Prime. I first talked about M Prime in Money Supply and Recessions. M Prime is based on Austrian economic theory that distinguishes money from credit. Those interested in the details can click on the previous link, but essentially M Prime approximates M1 with sweeps added back in.

Sweeps are automated processes whereby banks clear (sweep) excess funds from checking account nightly into other accounts so that it can be lent out. Sweeps originated in 1994 and with sweeps the last semblance of any sort of reserves went right out the window.

With the minor exception of things like travelers checks accounting, M Prime is pretty much a reconstitution of what M1 looked like prior to 1994. Here are a few charts. 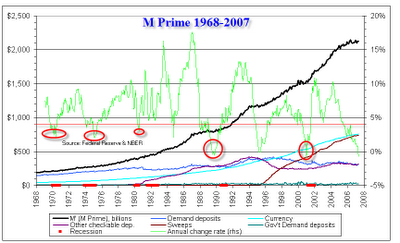 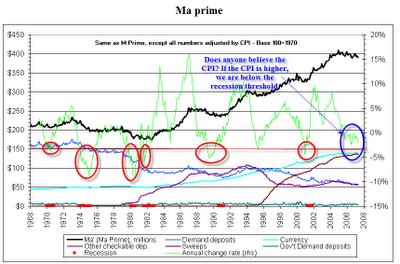 Note: The latest sweeps data we have is from March. That data was extrapolated forward through the first week in May. A quick look at the above charts will show this is likely to be a minor consequence. Thanks to economist Frank Shostak for the idea behind M Prime. Thanks to Bart at NowAndFutures for reconstructing M3 and for the charts in this post.

Hmmm. M3 is soaring while M Prime is contracting… So what’s it all mean?

What does it mean?

* Credit is expanding rapidly but with fractional reserve lending via sweeps and other mechanisms such as GSE debt creation and various carry trades, actual money itself is now contracting.
* This is further proof that the Fed has now totally lost control. What else can it mean when credit is soaring in the face of what otherwise appears to be rather tight monetary policy?
* The distinction between money and credit is significant. A huge expansion in money supply leads to hyperinflation like the Weimar Republic or Zimbabwe.
* A huge expansion in credit eventually leads to things like the tulip mania implosion, the railroad bust, and the great depression.
* The Fed will fight this tooth and nail but right now their hands are tied. When the Fed starts lowering rates to combat this malaise, look for gold to soar.
* Long term, there is no way out. The policies of Greenspan and Bernanke will be repudiated.

Many eyes are focused on M3 but my eyes are also watching M Prime. And while I still think M3 will eventually implode, the contraction in M Prime right now tells two stories.

1. How the Fed that has totally lost control of credit
2. How much credit expansion it takes to grow jobs and the GDP at very anemic rates

The kicker to this mess is that the current round of leveraged buyouts will soon lead to a contraction in jobs. Those LBOs are being funded by reckless increases in debt (the same thing that fueled subprime lending and the housing bust). To pay back that debt will require a cutback in expenses. A cutback in expenses invariably means a cutback in jobs and expansion. Look for many of these deals to default and for various pension plans chasing yield to be left holding the bag.