Michael Shedlock has a post, “Real World vs. Financial World,” which has a lot of interesting charts, which in his view pointed to an upcoming recession.

The ones that interested me in particular related to money supply. As readers may know, money supply has fallen out of favor (the Fed prefers inflation targeting these days), and commentators instead focus on other proxies for liquidity, like risk spreads.

There is a belief in some quarters that liquidity drives stock prices. Some old market hands has their own methodologies for looking at various component of money (I know one who was very fond of looking at growth in the Fed’s net free reserves).

So if you are of the school that growth in money supply will lift stock prices, this excerpt from Shedlock’s post will explain the disconnect between deteriorating fundamentals and soaring stock prices (and suggests this rally may have a way to go, although Shedlock points out the Fed appears to be trying to rein things in):

Here in the US, we know that M3 was bound, tied and thrown off the side of the ship into the deep blue abyss a year ago. But as a quasi substitute, MZM (money of zero maturity) is relatively broad in and of itself as a measure of monetary levels and acceleration. As an example of what’s really happening in the land of money/credit creation stateside, the following table lists the annualized growth rates of MZM over the last one, two, three six and twelve months. Get the picture? 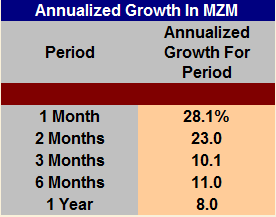 There is no need for a quasi-M3 substitute. Bart at NowAndFutures has reconstructed M3. The only component that is not available is Eurodollars and Bart estimates that based on historical correlations. Still, Eurodollars are only about 3% of M3 so unless Eurodollars have skyrocketed unbeknown to anyone, whatever he is off on Eurodollar estimates is not likely to be statistically significant. Bart calls his reconstructed numbers M3b. Here is the weekly chart as of April 28th. 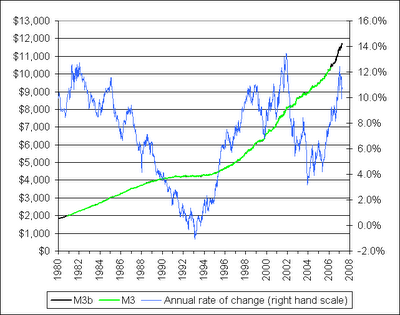 Is this a start of a pullback in M3? It will be interesting to watch going forward. A couple weeks do not a trend make but the Fed is having a difficult time defending a 5.25% target (on the high side). There have been several reverse repos recently so we need to watch and see if this pattern continues.

Consistent with the view that the markets will undergo an “explosive” rally (Jeremy Grantham), aka a “melt-up” (Barry Ritholtz), we have another respected pundit, Dennis Gartman, warns of a “parabolic” rally, all three seeing a dramatic decline thereafter. The Gartman view, as reported in MarketWatch:

The respected Gartman Letter, marketed to investment institutions and not monitored by the HFD, has a chilling explanation of what’s going on.

Editor Dennis Gartman wrote in the past week: “We stand in awe of the sheer majesty of this rise.” But Gartman’s response is to review what he wrote about an earlier unstoppable bull: the Japanese stock market of the late 1980s.

As Gartman remembers: “Shares there were running skyward even as the economies of the rest of the world were tanking. The Bubble was going “parabolic,” and every modest decline was met with huge new buying, that soon took shares to incredible new highs as the Nikkei soared toward 40,000.”

Gartman draws this moral: “We must remember that when markets go parabolic (and they do indeed go parabolic from time to time) it is important to remember one of our oldest trading aphorisms: that the final 10% of the time frame of a bull market can, and often will, encompass 50-75% of the price movement. We may be in that environment now. Things seem to want to go “parabolic.” What may seem like insanity may be nothing more than history repeating itself once again.”

Gartman is not predicting that U.S. stocks are on a permanent high plateau, rather the reverse: “As we have said, this will stop when it stops and not a moment before. It will stop of its own volition; it will stop suddenly; it will end in tears, but it can and likely shall continue to move higher nonetheless.’