The blog Long or Short Capital is amusing and often astute (and we all need comic relief sometimes). From “I’m Calling the Top today, my ten signs“:

2. Microsoft (NASDAQ: MSFT) (supposedly smart people) paid 38x EBITDA for a company that has half its earnings from a product that Google will probably offer for free.

3. Sotheby’s (NYSE: BID) stock price has predicted the last two recessions and is predicting another any second:

5. Shares of the Berlin Zoo (BBERG: ZOO.GR) recently doubled due to the birth of a baby polar bear named “Knut“.

6. Private Equity firms in search of stable cash flows are buying Qantas and Iberia – they are airlines. In case you’ve been dead for the last 50 years, airlines are not in the steady cash flow business.

7. Blackstone, a company built on the advantages of private vs public ownership, is going public.

8. Actual NYTimes headline: “At Cannes This Year, the Bankers May Outnumber the Movie Stars”

9. Michelangelo Volpi left his position as the head of an $11 billion division of Cisco (NASDAQ: CSCO) to become the CEO of startup Joost, which just raised $45mm of VC funding. And he isn’t crazy since Joost will likely be acquired for $40 billion in 2 months, or roughly 5 billion times revenue or negative 30 million times their projected 2010 cash flow.

10. Chinese solar company LDK Solar traded down after its IPO. That was a disappointment since two weeks ago China Sunergy shot up 51% after its IPO. In fact, there have been 9 solar-cell IPOs since Dec05 with yet another — Yingli Green Energy Holding — coming this week. Point of interest: LDK’s CEO was a shoe salesman 5yrs ago. Today he is worth roughly $1bn. 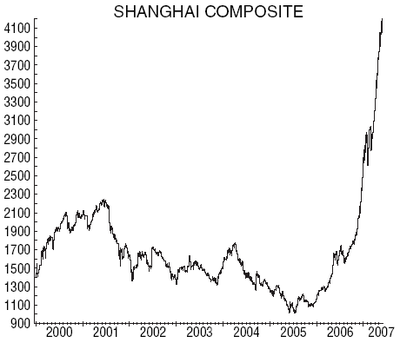