There was cheery talk of the rally in Treasuries Monday, but that was in large part due to a continued flight from risk. One symptom was that the riskiest ABX index, ABX.HE 7-01, which is a proxy for recent vintage BBB- subprimes, took a nosedive and then recovered, Traders used swords like “panic” rather than technical factors, to explain the market action.

A record low on a closely watched derivative index that measures risk of home loans made to borrowers with patchy credit histories pushed U.S. Treasurys sharply higher as investors sought a haven for their funds.

A lack of economic data meant there was little to distract investors, but concerns continue to deepen that subprime woes will spread further to the far corners of the credit markets.

The riskiest, BBB-minus slice of the subprime derivative index, known as the ABX.HE 07-1, hit a record low of 45 cents in yesterday’s trade, according to Alex Pritchartt, a trader at UBS. The index, which stood at 49 cents late Friday, edged back up to 46 cents in heavy afternoon trade, but the mood in the market remained dour.

“People are panicked,” Mr. Pritchartt said, noting that there was no specific news driving the declines.

The ABX index, which contains slices of risk ranging from the safest AAA-rating to the riskiest BBB-minus, is renewed every six months and measures the credit risk of select loans originated in the prior six-month period. The current index is influenced by mortgages originated in the last six months of 2006 when lending standards were especially lax.

The decline in the BBB-minus portion of the index encouraged some investors to snap up U.S. Treasurys, pushing the 10-year benchmark note back toward the key psychological level of 5%.

Some investors fear the drag of subprime mortgages will eventually hurt the broader economy and other asset classes not directly linked to such loans. Those concerns have boosted Treasurys on and off for the past month.

Treasurys yesterday were “at the feet of subprime,” said William O’Donnell, rates strategist at UBS. The market’s reaction is surprising, however, said Mr. O’Donnell, who thought investors had already “come to grips” with a declining index. “But I guess people are still on tenterhooks” about anything subprime related, he said.

It isn’t just the closely watched BBB-minus tranche of the ABX index that is suffering under growing subprime concerns. Andrew Lahde, managing partner of Lahde Capital Management, a hedge fund in Santa Monica, Calif., pointed out that the A tranche is trading at about 70 cents on the dollar, compared with 90 cents on the dollar just a month ago. Mr. Lahde has positioned for declines in the index. “I think people are betting on a bloodbath,” Mr. Lahde said, adding that he is surprised the higher tranches are “coming unglued” already.

Barry Ritholtz of the Big Picture also used the word “panicked” but said the cause might also be hedge fund liquidations. And remember, we have heard tales of hedge funds suffering 30%-50% losses, which pretty much means they have to wrap up, so this could be a short-lived phenomenon. But even so, if you have price discovery at a low level, and no trades taking place at higher prices (simply because the paper doesn’t trade on a routine basis), what is this going to do for how investors view (and more importantly, mark) their holdings? 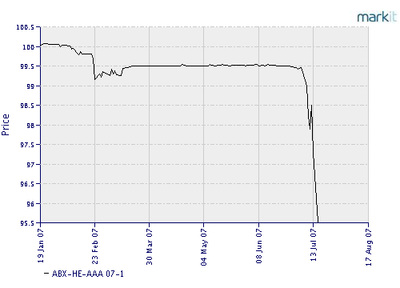 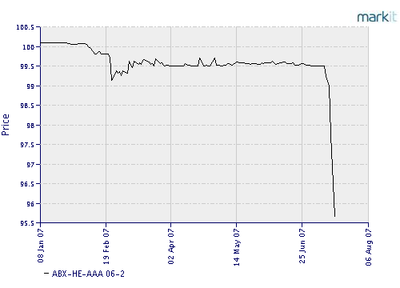 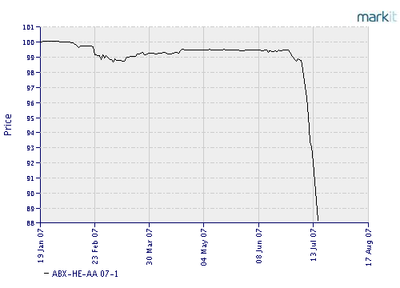 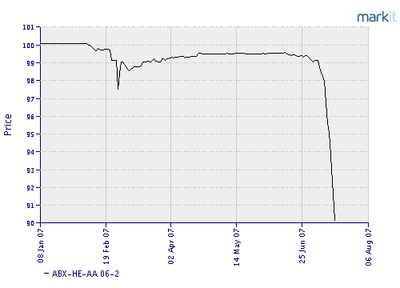 I’ve never seen anything embody a free fall so perfectly before.