More customers lined up today to withdraw cash from troubled UK building society Northern Rock after the Bank of England provided emergency funding. Bloomberg reported that there were expressions of interest in the bank, and given the continuing run, Northern Rock’s best course of action would be to make some kind of deal ASAP. The issue at this point is confidence, and getting the bank in stronger hands is the only action that might calm depositors. A second cash infusion by the Banks of England would alarm them further.

However, the seemingly rapid development of this crisis only heightens uncertainty about who else might be weaker than they seem. And the UK may be more exposed than most people realize. Consider this chart, courtesy the Nattering Nabob: 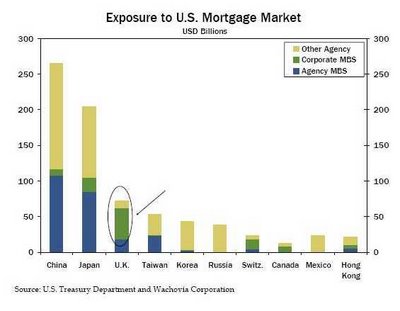 UK institutions proportionately have high exposure to “corporate” MBS, meaning those from non-GSE issuers. Then consider that rumor has it that it became more difficult to sell riskier mortgage paper in the US in 2006, so more was placed overseas. Further note that the subprime lending practices became considerably more lax starting the third quarter of 2005.

That means a relatively high portion of the bad stuff went abroad, and it further seems likely that a UK institutions were eager takers. In January, the Financial Times’ Gillian Tett quoted a e-mail that suggests that the problem of investors (and not just UK ones) getting in over their head was widely known:

“I don’t think there has ever been a time in history when such a large proportion of the riskiest credit assets have been owned by such financially weak institutions . . . with very limited capacity to withstand adverse credit events and market downturns.”

On the one hand, Northern Rock was a far more aggressive participant in the Brave New World of finance than other mid-sized British banks, so there is no reason to think this is a precursor of more failures. On the other, most customers didn’t have a clue. The specter of a bank run may lead customers at other banks to increase their cash on hand or spread their cash among more banks as a precaution (UK deposit insurance is less generous than in the US, and the quotes from people standing on line at Northern Rock indicated that they had no interest in taking a chance). Smaller accounts are less profitable to banks than large ones. That means other banks likely will suffer some fallout from the Northern Rock run.

Second, the crisis at Northern Rock will increase nervousness among already skittish counterparties.

Third, as a reader reminded me, when an institution starts to look wobbly in the UK, its directors are almost forced to liquidate. If an institution is deemed to have been “trading insolvent,” which means it continued to operate even though it could not satisfy its creditors, the directors are PERSONALLY liable. That means if a financial institution is on a downward slope, it has far less time than a US firm to find a strategic investor or arrange a sale. If the firm continued to operate but the rescue plans fell through, the directors would suffer financially for that failure. Better to fold than run that risk.

And interestingly, the Bank of England’s bailout effectively eliminates the liability problem for the Northern Rock directors. If the Bank of England in effect said they were salvageable, who are unhappy creditors to second guess them?

As many have noted, this rescue of a not-too-big-to-fail bank has severely damaged Bank of England Mervyn King’s credibility. Early this week, he made a submission to Parliament criticizing other central bankers for being unduly generous with liquidity, saying that it was tantamount to a rescue of investors who made bad decisions, and virtually on the heels of the statement, took steps similar to the ones he repudiated. And to make matters even worse for the Bank, this operation seems to have caused more problems than it solved.