Courtesy Calculated Risk, here is a MarkIt chart showing the latest tumble in the ABX (the chart in question is of the HE-BBB-07-2, a proxy for recent vintage BBB- subprimes): 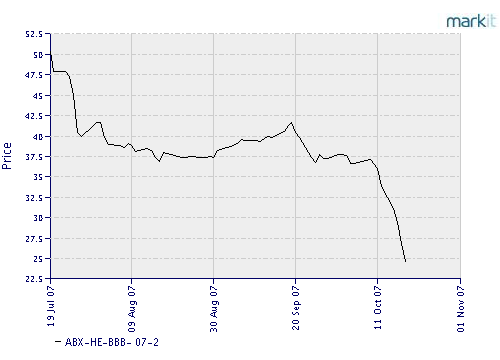 This plunge is troublingly parallel the past falls in February and July. Here is a quote from a Wall Street Journal article in July, the last time the ABX indices took a nosedive:

The riskiest, BBB-minus slice of the subprime derivative index, known as the ABX.HE 07-1, hit a record low of 45 cents in yesterday’s trade, according to Alex Pritchartt, a trader at UBS. The index, which stood at 49 cents late Friday, edged back up to 46 cents in heavy afternoon trade, but the mood in the market remained dour.

“People are panicked,” Mr. Pritchartt said, noting that there was no specific news driving the declines.

The ABX index, which contains slices of risk ranging from the safest AAA-rating to the riskiest BBB-minus, is renewed every six months and measures the credit risk of select loans originated in the prior six-month period. The current index is influenced by mortgages originated in the last six months of 2006 when lending standards were especially lax..