At this juncture, the question of “Whither Merrill?” is largely rhetorical. We won’t know for certain until the fourth quarter results come in, and for all firms, those are likely to be telling. However, consider the following:

Some securities analysts already estimate that based on further deterioration in the mortgage markets since September 30, Merrill is now sitting on an additional $4 billion in losses.

Although these charts are for ABX BBB and AAA indexes, which are proxies for the subprime paper (there are no proxies for CDOs), these charts, courtesy Calculated Risk, give an idea of the recent trajectory: 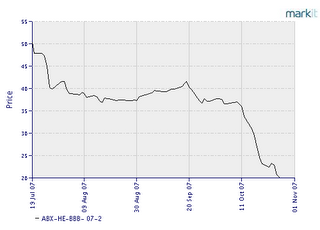 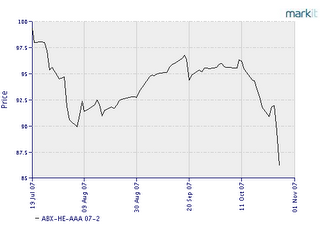 As of the end of the second quarter, Merrill owned $32.1 billion of collateralized debt obligations, reportedly AAA, and $8.8 billion of subprimes. A combination of sales and writedowns has whittled those figures to $15.2 billion and $5.7 billion, respectively.

However, CDOs have tremendous embedded leverage. Their prices are far more sensitive to changes in the performance of their underlying assets, than, say, subprime RMBS. That is why we have had the spectacle of rating agencies downgrading them, not by the normal grade or at worst two that you see for corporate bonds, but by huge amounts. Now that the rating agencies have gone through a process of reviewing ratings on various mortgage securities, Moody’s is turning to CDOs, and some issues have already gone from AAA to junk. That rapid a downgrade is impossible in the corporate bond world in the absence of fraud.

In addition, while Merrill has sold more than half of its earlier CDO inventory, it’s almost a given that what was most saleable was their better paper. What remains is more vulnerable. And with the subprime market taking, CDOs are sure to follow, both due to their direct exposure (a lot of subrprime paper went into CDOs, but many are subprime free) and to the knock-on effects on confidence.

With SIVs restructuring this quarter, which will entail some selling of mortgage related paper, there will be more stress on these markets. Between market deterioration and downgrades, it’s not hard to imagine Merrill taking 50% losses on its remaining CDO inventory. That would mean further writedowns in excess of $7 billion.