Maybe it’s the Prozac after all.

During the dot-com era, some blamed the ever-levitating market on Prozac. With 28 million prescription written annually, a meaningful proportion of the investing population was on anti-depressants. Perhaps the shift in collective mood was enough to blunt caution.

Now I have no idea of the use of antidepressants is in the US versus the UK, so meds may have no explanatory power. However, despite the stock market correction, the US equity market is still looking for a reason to believe, and finding it every second or third day. That is notably at odds with the deteriorating mood and tone in the credit markets, and the corresponding risk-shunning by investors. I continue to be mystified by the divergence in viewpoints.

One clue may come from the contrast between a set of articles in the New York Times and the Financial Times was noteworthy. The Times stories strove to be evenhanded, while the editorial in the FT, “Survivor’s guide to a slowdown,” starts with the premise that equities are overvalued, hardly a notion that gets much traction in the US financial media.

Strange as it may seem, the US journalistic practice of balanced reporting feeds optimism. Studies have found that not only do the great majority of people have an optimistic bias, but in keeping, they also tend to discount negative information.

Another contributing factor is the limited coverage that the important but rather opaque credit markets get in the US. Since the credit markets are where the train wreck is occurring, incomplete coverage leaves the public in the dark as to how bad things really are.

The two NY Times stories were straightforward. The first was “Bargain Hunting on Wall Street“:

Investors leapt into the ailing stock market, snapping up discounted shares of financial companies that had been battered by shake-ups and write-downs tied to subprime mortgages…..

“Having revisited the lows experienced in August, we’re seeing markets bounce from those lows,” said Ian Scott, a global equities strategist at Lehman Brothers. “There is a bargain-hunting mentality around at the moment.”

But there is also plenty of fear. The renewed threat of a credit squeeze and a spate of bad news from the housing sector have left investors anxious and uncertain about the state of the broader economy. A record-low dollar and record-high oil rounded out the bleak landscape.

While one wouldn’t classify that piece as optimistic, it wasn’t a downer either.

Next consider this piece, “Economy May Defy Past and Disregard Housing,” from columnist Floyd Norris:

The Federal Reserve Board forecast this week that there will be no recession in the United States in the foreseeable future. It says the gross domestic product will grow by as little as 1.6 percent in 2008, but is confident that growth will accelerate after that.

That forecast — the first formally issued by the Fed in line with its effort to be more transparent — was released the same day that the Census Bureau reported a continued slowing of housing starts. The number of new homes being built is now little more than half the level of two years ago.

If the Fed is right, and the economy does stay out of recession, with the unemployment rate barely rising at all, then it will be the first time ever that a housing slowdown this severe has not coincided with a recession. In fact, there has never been a slowdown of anything like this magnitude until after a recession was under way.

The minutes of the October meeting of the Fed’s open market committee, which were released along with the forecast, conceded that there was a risk of a downturn. “Participants were concerned about the possibility for adverse feedbacks in which economic weakness could lead to further tightening in credit conditions, which could in turn slow the economy further,” the minutes reported.

The Fed said there was also a risk from “a more severe contraction in the housing sector and a substantial decline in house prices.”

But Fed officials also concluded that “in recent decades, the U.S. economy had proved quite resilient to episodes of financial distress, suggesting that the adverse effects of financial developments on economic activity outside of the housing sector could prove to be more modest than anticipated.”

As the accompanying charts show, the decline in housing starts has been rapid and sudden, particularly for single-family homes. Such violent swings were more common decades ago, when increases in short-term interest rates could shut off deposits for savings and loan institutions. At the time, the savings and loans were limited by law from raising deposit rates too far. That made mortgages hard to get until rates came down. 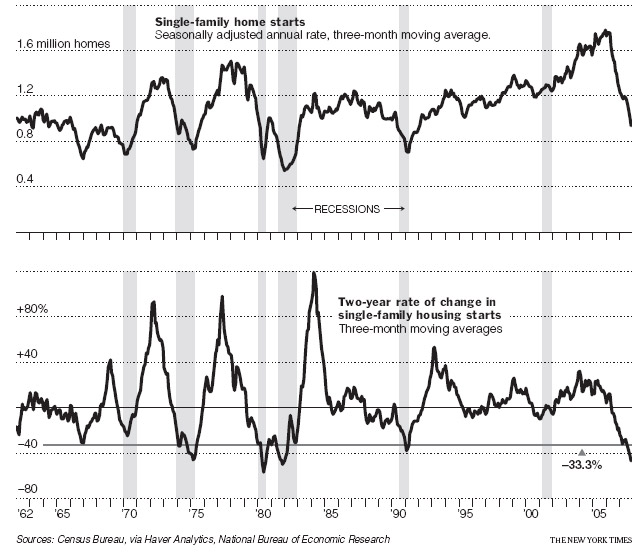 Falling home prices and tougher lending standards may be having a similar effect now.

The second chart shows two-year changes in home starts, again measured by three-month moving averages to smooth out weather-related distortions. The rate of new-home starts from August through October — as the mortgage crisis took hold — was down 47 percent from the same months of 2005.

Since the early 1960s, when the data became available, there have only been three previous cycles when starts fell by at least a third over two years. By the first month with such a decline in each of those cycles — January 1974, March 1980 and January 1991 — a recession was under way.

There have been recessions without such a large impact on housing, most notably the 2001 downturn. But the housing market has never done this poorly without a recession starting.

The Norris piece is very good, but if you were to read the headline or merely skim it, and not look at his charts closely (and they need to be read, not glanced at), it would be easy to get the wrong impression. He gives the Fed’s views prominent play, and doesn’t in his text give a strong signal (a pithy phrase or even a well-placed “Nevertheless”) to signal that he think the Fed is smoking something pretty potent. You have to read his argument to get his message.

The credit market is still in turmoil, economic growth on both sides of the Atlantic looks likely to be weak in 2008, and the prices of a variety of assets are worryingly high. Asset prices should already have discounted that negative outlook for next year, and it is foolish to try to predict their path too precisely, but for the average investor trying to manage their wealth, it is worth considering a scenario in which the slowdown becomes worse.

A shock in the US housing market has hit construction, produced losses for banks and lenders, and caused a reappraisal of the right price for risk. Financial sector profits have been hit and credit will be harder to come by. The next stage could be a wider slowdown in investment and consumption that hurts corporate profits still further, causing layoffs and rising unemployment, and therefore still weaker US demand. In the worst case, the result could be a global recession.

Central banks will cut interest rates in a recession, so the obvious place to hide is government bonds, but those markets have already reacted. Five-year UK gilts yield only 4.5 per cent and three-year US Treasuries less than 3 per cent. Given the inflationary risks of high oil prices and the falling dollar, the Federal Reserve’s ability to cut interest rates may be limited, and cash may produce better returns.

The risk of further falls in the dollar is severe. Currencies have a marked tendency to follow trends and to overshoot estimates of “fair value” once they start moving. The great danger – to which the pound sterling is also exposed – is foreigners losing confidence and selling assets. East Asian currencies still look cheap, however, as do those of oil exporters that peg to the dollar.

Adjusted for the economic cycle, equities look too expensive, and if a slowdown hits corporate profits, they are likely to fall. Lower prices are good for long-term investors who buy regularly for their pensions, but for short-term investors, buying is hard to justify. The S&P 500 index is up this year in spite of the flow of bad economic news.

That leaves property: the asset class at the centre of the US slowdown. Real estate prices look high relative to incomes and rents in many countries, and while that has been true for several years, it means they are at risk of falls. It will always make sense to own a residential property – it hedges our own demand for somewhere to live – but as a pure investment, real estate looks vulnerable. Investors should note that new risk-management tools, such as house price contracts listed on the Chicago Mercantile Exchange, are now available.

After 20 years of strong growth and benevolent markets, few assets look cheap. For those investors worried about tougher times there are a few simple rules: avoid leverage, keep cash to hand and remember that lower asset prices are an opportunity as well as a cost.

Remember, this isn’t the view of an FT columnist; this is its lead editorial. In America, this view would be treated as bearish, yet the FT no doubt sees this as an informed consensus forecast. But we Americans will apparently try to maintain our rose colored world view until reality becomes undeniable.