A kangaroo met an unlikely death after it bounded into the surf in southern Australia and was mauled by a shark, according to eyewitnesses. 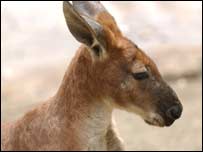 Daniel Hurst, who says he saw the incident while out walking his dogs, was accused of being drunk or on drugs after he told the story to friends.

But the emergence of a second witness and the discovery of mangled kangaroo remains appear to confirm his story.

Experts say kangaroos will take to the sea only if they are ill or in danger.

Mr Hurst said he was walking along Torquay beach in Victoria when he saw the marsupial behind scrubland next to the dunes.

“It just headed down towards the water and in it went,” he told Australia’s ABC News.

“There’s a bit of a rip in that area so… the kangaroo could have been dragged out, but I could still see its head, and that’s when the shark leapt out of the water on its side.

“The kangaroo disappeared after that. I stayed around for a while, just very interested, and hoping the shark jumped again, but it never eventuated.”

The unlikely tale appears to have been backed up by local officials, who discovered a kangaroo carcass on the beach.

And a second witness, Mick Boucher, came forward to say he also saw the shark attack.

Mr Boucher said the marsupial, which seemed dazed, stood at the edge of the water for about 10 seconds and then started swimming out to sea.

“It was bobbing up and down,” Mr Boucher said.

He told the Geelong Advertiser that the unfortunate marsupial was about 200m (656ft) from shore when the shark struck.

He said the predator’s back was clearly visible above the choppy waves as it launched its attack.

“It wasn’t a huge shark and it was too far out to see clearly, but it was a shark. I couldn’t believe it.”