I’m late to this item, but from what I can tell, it went relatively unnoticed upon despite its seeming importance.

The Wall Street Journal’s Greg Ip, in “Fed Officials Downplay TIPS Inflation Signal,” makes the case that the Fed is whistling in the dark as far as inflation is concerned. He takes their optimism at face value, as in that they have somehow talked themselves into it. Other explanations are possible. For instance, it could be that the Fed knows full well that its policy options are lousy, it feels it has to keep the liquidity spigot on full even though it knows full well that will probably lead to inflation worries down the road. But acknowledging inflation risks would probably feed them, so denial, even if it risks the Fed’s credibility, is the wiser course of action.

What makes this post intriguing is that Ip is widely believed to have a special standing with the Fed; they call him when they want to convey a message not through official channels (for example, correcting misunderstandings of Fed pronouncements). So conversely, even though this is a blog post, one would think that the Fed probably pays more attention to Ip than most reporters and commentators.

Thus, this post has particular significance, While Ip is going on Fed statements, he’s a particularly well informed Fed watcher. And in a rather anodyne fashion, he’s telling his best source that he thinks they are smoking something awfully potent.

rning signs are popping out all over. One of the more alarming is in the market for Treasury inflation-protected securities, known as TIPS.

Ever since Federal Reserve Chairman Ben Bernanke signaled in early January he was subordinating the fight against inflation to the fight against recession, the spread between TIPS and regular (nominal) Treasurys has widened. That breakeven is an indication of the inflation rate bond investors expect to prevail over the maturity of the bond.

Yesterday, the 10-year breakeven hit 2.5%, the highest since August, 2006, while the five-year spread hit 2.58%, according to Anthony Crescenzi of Miller Tabak & Co. Indeed, he notes that on some TIPS, the yield is actually negative, meaning investors assume that after inflation, they will lose money owning the nominal bond. 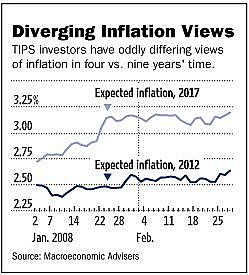 But top Fed officials are playing down the importance of this signal. “Does this rise in [breakevens] indicate that long-run inflation expectations have risen by a similar amount?” Governor Frederic Mishkin asked in a speech yesterday. “My best guess is that much of the rise in inflation compensation reflects other factors.”

Mr. Mishkin says it’s because the breakeven doesn’t represent just expected inflation, but compensation for other factors including uncertainty about inflation. By this reckoning, if investors have the same forecast for inflation but less confidence in that forecast, they will pay extra (i.e. accept a lower TIPS yield) for insurance against inflation. This is true even if there’s an equal chance of it coming in lower as higher than expected. Mr. Mishkin noted the same thing happened in 2003 and 2004 when the fear was deflation. Increased inflation uncertainty could explain the greater increase in breakevens nine years from now vs. four years from now. Mr. Mishkin says that interpretation is supported by recent surveys of economists that found only a marginal increase in expected inflation but increased uncertainty about the trajectory of inflation.

Brian Sack of Macroeconomic Advisers thinks the Fed should not take so much comfort in this explanation. First, even just looking four years from now, there’s been a large increased in breakevens since early January, compelling evidence of more inflation concern. Second, “it is not clear that the [Fed] should be dismissive of the rise in breakevens even if it is driven by the inflation risk premium rather than inflation expectations. A credible central bank should not only keep inflation expectations low and steady, but it should also prevent investors from pricing in substantial upside inflation risks.”

More noteworthy is that senior Fed officials have tended in the last month to look at every inflation warning as a glass half full. Surveys of consumers and professional forecasters both show an increase in expected inflation; but senior Fed officials focus on the small magnitude of the increases rather than the fact of them, and note that these measures remain within the range of recent years. The rise in core inflation (which excludes food and energy) is attributed primarily to pass-through of energy prices and unsustained drops in certain categories earlier last year, with the implication that both effects are temporary. The rise in commodity prices is seen either as a reflection of global growth or speculation rather than an endogenous response to expected inflation. Similarly, the fall in the dollar is attributed to differential growth rates and interest rates between the U.S. and its trading partners. Core inflation measured by the price index of personal consumption expenditures has been above the 1.5% to 2% range of Federal Open Market Committee definitions of price stability for three months now. Mr. Bernanke noted both data points in his testimony to Congress last week but did not connect them. Blogger Tim Duy says, “What is clear is that the Fed remains eager to dismiss any inconvenient information.”

To be sure, the Fed has good, fundamental reasons to be optimistic on inflation, perhaps most important the fact that a recession, if it happens, will do a lot to contain wage and price gains. Credit market conditions are worse than ever. “It is increasingly obvious that the Fed is in a no-win situation,” writes Mr. Duy. “The best case scenario for the Fed is that nominal wage growth is kept in check by a deteriorating labor market. This will help contain inflation expectations and prevent a more serious 1970’s type of environment.”

Note to Duy: we don’t need a deteriorating labor market to keep wages in check. Labor (and that includes overworked white collar workers ex investment bankers) have had no bargaining power even in a growing economy. We may be going down the Japan path, of low growth and deteriorating real wages, albeit at a higher rate of inflation.