With all the cheery talk about how our credit crisis is a thing of the past, mortgage rates, as reader Scott reminds us, are moving up again. From his message:

You’ll recall that some time over the last month or so, bullish commentators noted that with mortgage rates falling, resets of ARMs were no longer a problem. (Note in this regard that in addition to resets, so-called recasts—option arms that have reached the limit of their negative amortization, the point at which the principal has climbed to its maximum allowable amount, and the mortgage morphs into a fixed rate at a much higher payment schedule [This is what Wamu, First Fed, Downey, and Golden West/Wachovia wrote tons of] are an additional huge problem irrespective of where mortgage rates are.) In any event, mortgage rates have skyrocketed yet again. 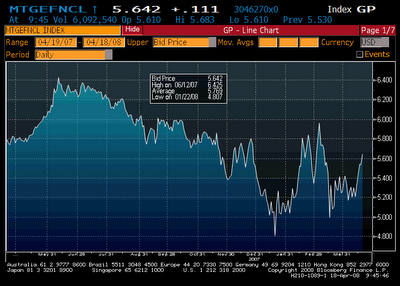 More commentary from the Financial Times:

US mortgage rates soared this week after a dramatic sell-off in the Treasury market that hit housing sector recovery hopes even as it suggested investors were growing more confident in the medium-term US economic outlook.

The yield on the 10-year Treasury rose as high as 3.85 per cent on Friday from less than 3.50 per cent last week as investors sold bonds on expectations that the Federal Reserve could soon end its rate-cutting cycle…

“The back-up in yields is a concern as it will damage the economic outlook,” said Jane Caron, strategist at Dwight Asset Management.

The three-month London interbank offered rate – Libor – increased to 2.91 per cent from 2.71 per cent this week, indicating underlying stress in the financial system.

Stocks rallied, said Anthony Conroy, head of equity trading at BNYConvergEx, because “the equity market is focused on a second-half recovery…and is not