Various indicators suggest that the tone of the credit market (save the interbank market) is improving:

jck at Alea deems the latest TSLF auction to be a success.

Bloomberg tells us that government bond prices are falling, not just in the US but other major economies, signaling a return of confidence:

Government bonds worldwide are heading for their first monthly loss since June, as rising commodity prices stoke inflation and bankers say the seizure in credit markets is easing.

Yields on Japanese government bonds due in five years today rose the most since 1999 after consumer prices surged 1.2 percent in March from a year earlier. U.S. Treasury notes due in 2010 are poised for their biggest two-week decline since 2001 as traders add to bets the Federal Reserve will stop cutting borrowing costs after its April 30 meeting. European Central Bank President Jean- Claude Trichet said yesterday euro-region interest rates at a four-year high were adequate for curbing price growth.

“Some people seem to be thinking the credit crisis is coming to an end,” said Ciaran O’Hagan, head of interest-rate research in Paris at Societe Generale SA, France’s second-largest bank. “The market had been expecting rate cuts from the Fed and they’ve been almost totally priced out, while in euro land, investors are expecting rate hikes.”…..

“There’s been quite a shift in bond-market sentiment over the past few weeks,” said Nick Stamenkovic, a fixed-income strategist at RIA Capital Market Ltd. in Edinburgh. “The market has become increasingly confident that the worst is over for the financial sector and that the Fed is nearing the end of its easing cycle.”

Some traders anticipate fewer rate reductions into Treasury prices on speculation policy makers are concerned that lower borrowing costs will stoke inflation. Consumer prices in the U.S. rose at a 4 percent annual pace in the 12 months through March.

Demand for fixed-income securities also waned as investor appetite for riskier assets improved. The MSCI Asia Pacific Index of stocks has returned 6.9 percent this month, while the Standard & Poor’s 500 Index has advanced 5.1 percent.

The cost of protecting corporate bonds against default fell to the lowest in three months today as the $76 billion of capital banks raised worldwide in April buoyed confidence…..

“The markets are moving from the panic mode of a month or six weeks,” said Andrew Bell, head of research and strategy at Rensburg Sheppards Plc in London. “Part of the panic of being really risk-averse in equities was to pile into the short end of the Treasury market.”

Futures contracts on the Chicago Board of Trade show there’s a 26 percent chance the Fed will keep the U.S. target rate for overnight bank lending on hold at 2.25 percent on April 30, up from 2 percent a week ago. The balance of the bets are for a quarter-point reduction. The odds of a half-point cut are zero, compared with 28 percent a month ago.

As a result of the improved mood, corporate issuers rushed to the market. From a separate Bloomberg story:

Citigroup Inc. and Merrill Lynch & Co. led $45 billion of U.S. corporate bond offerings, the busiest week on record, as financial companies sold debt at the highest yields since May 2001.

Sales compare with $31.2 billion last week and an average this year of $18 billion, according to data compiled by Bloomberg. Citigroup, the biggest U.S. bank by assets, sold $6 billion of hybrid bonds in the company’s largest public debt offering, while New York-based securities firm Merrill Lynch raised $9.55 billion by issuing debt and preferred securities.

Bond offerings soared as investors grew more optimistic financial companies can recover from $309 billion of writedowns and credit losses tied to the collapse of the subprime-mortgage market. Banks and securities firms sold 88 percent of investment-grade debt this week, Bloomberg data show. High-yield bond issuance swelled to the most since November.

“Investors are feeling better about banks being proactive about raising capital,” said Mike Difley, who helps oversee $21 billion in fixed-income assets as a portfolio manager at American Century Investment Management in Kansas City. “They’re trying to get their house in order.”

The previous high for U.S. corporate bond sales was in the week ended June 22, 2007, when $42.1 billion of debt was issued, Bloomberg data show.

Note that this development is a bit of a mixed bag, since the bond issues were skewed towards the desperate riskier issuers.

The Vix and , which many see as a proxy for market risk generally, also fell, and as did options implied volatility in financials, per VIX and More:

Just yesterday, in Financials Struggle to Establish Momentum, I expressed some concern that the recent relatively weak performance of the financial sector (XLF) did not bode well for any sustainable bull moves. Perhaps the sector overheard me, as today the XLF is up 2% in an otherwise flat market as I type this.

While the price action is ultimately what matters most, there is more to the story than just the prices of the financial stocks. In particular, I am watching the implied volatility of XLF, the financial sector’s bellwether ETF. As depicted in the chart below, the implied volatility (which has a significant fear and anxiety component in it) for XLF is approaching levels not seen since the first week in November.

I consider option traders to be a fairly savvy bunch; if they think that the risk premium in the financial sector is lower than any time in the past six months, I am going to listen – and watch to see what happens to the price.

The Financial Ninja, who pointed to the post above, is not convinced, as his post title, “Bulltards Grow Complacent: VIX Drops“, makes clear (click to enlarge): 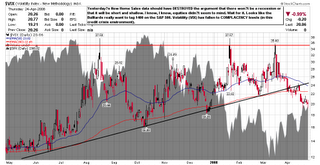 Yesterday’s New Home Sales data should have DESTROYED the argument that there won’t be a recession or that it will be short and shallow. I know, I know, equities didn’t seem to mind. Wait for it. Looks like the Bulltards really want to tag 1400 on the S&P 500. Volatility (VIX) has fallen to COMPLACENCY levels (in this credit crisis environment).

Love those charts, even though they make no sense to me…..