Funny how it takes a survey to confirm what any reader of the press ought to know right now: consumers, hit by rising fuel and food prices, expect a higher level of inflation for the next 12 months (5.2%, according to a Reuters/University of Michigan survey): 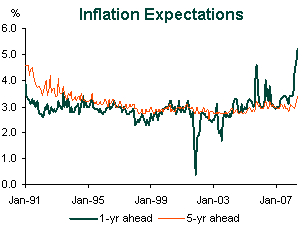 One of the things that has led the Fed to take signs of rising inflation less seriously than it otherwise might is the lack of worker bargaining power. The 1970s witnesses so-called cost-push inflation, where rising prices led workers to demand and get corresponding wage increases, which then fed more price hikes. That hasn’t happened yet, but a Wall Street Journal story suggests that might be starting to change:

“Parking is going up, gas is going up, food is going up … but the wages aren’t going up,” said Jan Cornell, president of a union that represents 400 workers at the University of Virginia in Charlottesville. The union is seeking a wage increase.

But with unions comparatively scarce, it isn’t clear by what mechanism beleaguered and insecure employees can extract better pay. And note that you don’t need inflation for workers to suffer falling real compensation. Look at the trends in Japan: 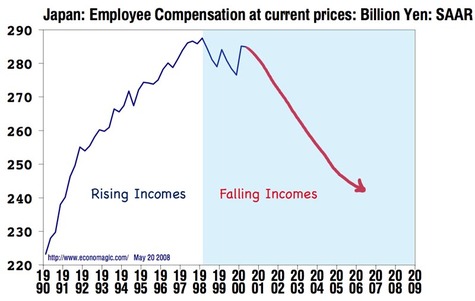 Observe also when the change occurred, aroung 1998, when the countries that either suffered in the emerging markets crisis or managed to escape (China) vowed never to be at the mercy of the IMF. Their remedy was currency pegs against the dollar. Japan has managed to have high trade surpluses even post 1998, but at the expense of domestic pay packages.

So far, even though corporate profits have been at a record percentage of GDP (see here and here), some large companies, are trying to contain price increases by sacrificing margins, while others are passing them through:

Some companies, after initially trying to absorb increased energy costs, are passing them along to customers. Wednesday, Dow Chemical Co. said it plans to raise prices on its products as much as 20% to offset “staggering” energy costs. The company joins Kimberly-Clark Corp., which is raising prices on goods including toilet paper, diapers, and paper towels for the second time this year. Others lifting prices include tire maker Michelin North America, Kraft Foods Inc., and several retail jewelers.

While restraint on price increases may for a time reduce the pace at which cost increases move through the economy, at some point businesses will reach the limits of their willingness to absorb expense increases.