The dollar rose today, and gold has fallen below $900 as f this writing due to revisions in the first quarter GDP release that increased growth from “anemic” to “slightly less anemic”.

Note that there was considerable skepticism about the initial 0.6% GDP growth figure (the revised level is 0.9%) because the total was entirely due to inventory increases, which some cynics regarded as a fudge. The current version of the figure attributes more to improved exports, less to inventory gains.

The continued rally in the dollar is due to a perception that the Fed might start raising interest rates sooner rather than later. As much as I think that would be the better course of action (see here for why), those views seem overdone.

The big reason is the Fed is very concerned about the housing market. Low short rates will reduce ARM reset shock. ARM resets peak in August and continue at high levels through 2008: 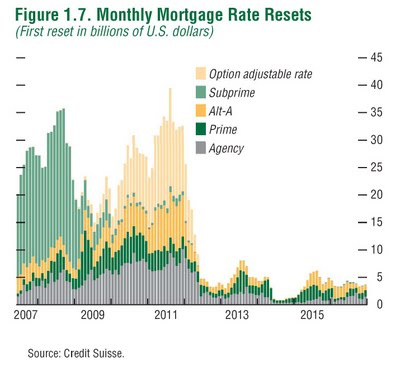 The second is that 0.9% nominal reported growth, likely a contraction in real terms (the deflator used was 3.5%; many argue that closer to 5% is more accurate), hardly indicates that the economy is out of the woods. As long as the economy looks to be at risk of falling into a recession, it will take more courage than the Fed has shown thus far to increase interest rates. As Jeff Frankel noted:

It is hard to say that we entered a recession in the first quarter, without a single negative growth quarter, let alone two of them. Even so, three minor qualifications to that 0.9% remain:
1) The number will be revised again, and could move in either direction.
2) A bit of the measured growth consisted of an increased rate of inventory investment, which was almost certainly not desired by firms and is likely to reverse in the 2nd quarter
3) As Martin Feldstein has pointed out, the QI growth number is defined as the change for the quarter as a whole relative to QIV of 2007; within QI, the information currently available suggests that GDP fell from January to February to March.

The reason why many suspected a QI turning point in the first place is employment, which is virtually as important an indicator to the NBER BCDC as is GDP. Jobs have been lost each month since January. Total hours worked is my personal favorite, because in addition to employment it captures the length of the workweek, which firms tend to cut before they lay off workers. This indicator too has been falling.

And of course there are the longer run indicators that have been very worrisome for almost a year: depressed household balance sheets, mortgage defaults, high oil prices, low consumer confidence, etc.

The economy is a four-engine airplane flying at stall speed, skimming along the top of the waves without yet going down. Real gross domestic purchases increased only 0.1 percent in the first quarter. But exports provided an important source of demand for US products, and are likely to remain a positive engine of growth in the future. The same is true of the fiscal policy engine, as consumers receive and spend their tax cuts in the 2nd and 3rd quarters. On the other wing, the investment engine has been knocked out; inventory investment is likely to fall and residential construction will remain negative for sometime. The big question mark is the consumption engine. Is the long-spending American household taking a hard look at its diminished net worth and taking steps to raise its saving rate above the very low levels of recent years?

We are already clearly in a “growth recession.” All in all, I put the odds of an outright recession sometime this year at greater than 50%. That number is meant to add together:
(1) the odds that it will turn out that we have already entered reached the turning point and
(2) the odds that the sharp recent expansions in monetary and fiscal policy will succeed in postponing the recession, but only until later in the year.
Come the fall, if demand starts to slow, I can’t see either the Fed delivering a second big dose of interest rate cuts (as they were able to in the 2001 recession, when the dollar was strong and inflation under control), nor the government delivering a second big dose of tax cuts (as they could in the 2001 recession, when the budget outlook was strong and debt under control).

Note two things in Frankel’s commentary: he sees the only possible of engine of growth as consumption, yet as we have discussed elsewhere, the current US level of consumption, with zero to negative consumer savings, is simply unsustainable. The longer the powers that be try to hold off an inevitable slowdown, the worse the collateral damage is likely to be.

Second, note that Frankel doesn’t even consider the possibility of a Fed rate increase given the weak fundamentals; he simply sees the ability to cut further as constrained by inflation and the dollar.