Markets continue to be roiled by the upset of the effort to pass the touted Paulson bailout bill. As of this writing, the FTSE and Dj Stoxx 50 are up slightly, but money markets took a beating, the reaction worsened by end-of-quarter factors. From Bloomberg:

The cost of borrowing in dollars overnight surged the most on record after the U.S. Congress rejected a $700 billion bank rescue plan, heightening concern more institutions will fail.

The London interbank offered rate, or Libor, that banks charge each other for such loans climbed 431 basis points to an all-time high of 6.88 percent today, the British Bankers’ Association said. The euro interbank offered rate, or Euribor, for one-month loans climbed to record 5.05 percent, the European Banking Federation said. The Libor-OIS spread, a gauge of the scarcity of cash, advanced to a record. Rates in Asia also rose.

“The money markets have completely broken down, with no trading taking place at all,” said Christoph Rieger, a fixed- income strategist at Dresdner Kleinwort in Frankfurt. “There is no market any more. Central banks are the only providers of cash to the market, no-one else is lending.”….

The two-month Libor rose to 5.13 percent today, also a record. Libor, set by 16 banks including Citigroup Inc. and UBS AG in a daily survey by the BBA, is used to calculate rates on $360 trillion of financial products worldwide, from home loans to credit derivatives.

Funding constraints are being exacerbated as companies try to settle trades and buttress balance sheets over the quarter- end, balking at lending for more than a day…..

Futures on the Chicago Board of Trade show a 66 percent chance the Fed will trim its 2 percent federal funds target rate by 50 basis points in October, surging from zero percent a month ago. The odds of a quarter-point reduction are 34 percent….

The Libor-OIS spread, the difference between the three- month dollar rate and the overnight indexed swap rate, widened to 246 basis points, showing cash scarcity is at a record.

The difference between what banks and the U.S. Treasury pay to borrow money for three months, the so-called TED spread, was at 338 basis points today after breaching 350 basis points for the first time yesterday. The spread was at 110 basis points a month ago.

With the end of the quarter and the three month date about to rollover into the new year, the dash for cash has generated substantial distortions, despite the recent central bank dollar swap announcements. First quote of the day for overnight dollars was 13.5%, and yesterday’s ICAP 3 month quote was 4.375%. The last time 3 month LIBOR was that high, Fed funds were 4.25%. The ruptures in the market can be seen in the chart below, which shows the 2-10 US government yield curve and the 2-30 US swap curve. Unsurprisingly, they are normally very highly correlated. However, recent front-end stress have driven a very significant wedge between government and swap curves 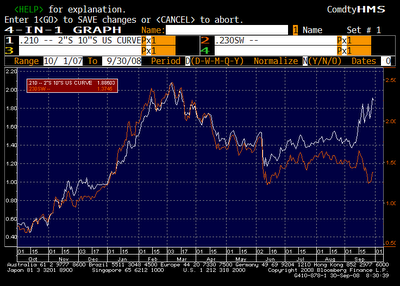 Quarter-end also brings about the usual mechanistic rebalancing flows from pension funds and other long-term real money investors. It appears that such flows are already going through in Europe, helping to generate a vicious intraday bounce in stocks. Well, it’s either that or the news of another Benelux bailout or an Irish government bank guarantee.

Or perhaps the market has decided that news which apparently ushered in a new Great Depression last night is actually pretty meaningless this morning. Macro Man and the chap next to him, both of whom are short stocks, have just been left shaking their heads this morning.

Note that FT Alphaville last week had said that Bloomberg on stock futures: