Equity analyst and market commentator James Bianco of Arbor Research e-maileda a discussion of the breakdown of interbank lending to us along with a few others, His note illustrates a point made by FT Alphaville a couple of weeks ago that we have harped on since, namely, that central banks’ efforts to provide liquidity to the money markets are not simply ineffective, but in fact counterproductive.

Bianco has put together a tidy and cogent analysis. He was looking for further insight and comment, so I hope readers with some perspective will speak up in comments.

From James Bianco (boldface his):

The Fed’s massive and numerous liquidity facilities are making things worse. The problem is more than banks unwilling to lend to each other, they are also unwilling to borrow from each other. Banks can get all the funding they need (and then some) from their central bank so they do not need to seek a loan from another bank. I believe it has gotten so bad that they don’t even bother to make a decent market for inter-bank loans anymore. No reason to, they don’t need them anymore as central banks have replaced them.

We can see this in the recent movement of 3-month USD Libor. See the following table.

It breaks down the 16 reporting banks for USD Libor during October. These banks are listed on the chart below the table. These 16 banks report their 3-month inter-bank lending rate to the British Bankers Association or BBA. The BBA calculates a Trimmed Mean by throwing out the four highest and lowest and averaging the eight in the middle (“Trim Mean” on the table below near the bottom). This is how they arrive at the Libor measure we anxiously await every morning (called “Posted Libor” in bold on the table below near the bottom).

Notice the huge spreads from bank to bank (see “range” in red near the bottom of the table). They suggest this is not a real market anymore. Real markets do not have this wide a variation. If it was a real market, these banks would have rates all similar to each other (click to enlarge). 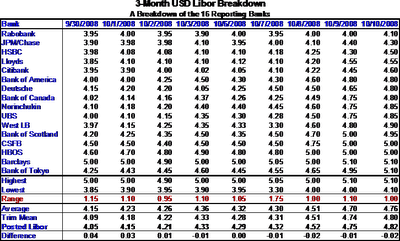 To give you an idea of how the current variation between reporting banks is “off the charts”, see the following charts. Prior to August 2007, it was unusual if the variation between the highest and lowest reporting bank was more than 1 or 2 basis points. Now it is regularly above 100 bps. As we like to say, a number so big no one understands it (click to enlarge). 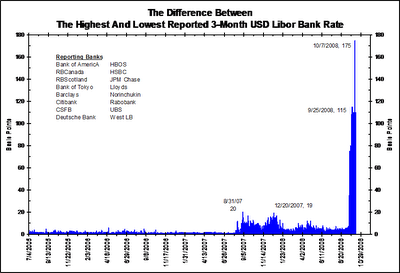 Too much central bank liquidity has destroyed the inter-bank lending market. This would be an “inside baseball” issue for the banking system except Libor is the benchmark for the “real economy” to get a loan. Libor is written into contracts and we have no good substitute. If Libor is screwed up, then the real economy pays because it needs Libor to get a loan.

This also means the market’s new favorite idea of having G7 countries guarantee all inter-bank loans will do nothing. If enacted, banks would still be missing an incentive to use the inter-bank loan market because they can get all the funding (loans) they need from their neighborhood central bank and at a much lower rate.