I am puzzled by some recent market anomalies, which are breakdowns of established patterns:

3. Oil stocks rallying more than the S&P (28% versus 18%) when oil prices continue to weaken and heating oil looks primed to fall

Now there are explanations for the appreciation in long-dated Treasuries that do not reflect just deflation worries. When the drop in CPI for October appeared to send a deflationary signal (and some analysts disputed this reading), Treasuries rallied disproportionately due not just routine short covering (ie. by point of view speculators), but the fact that the alchemists of certain complex products had used Treasury shorts to lower the cost of the product. The additional rally this week was due the announcement of the program for the Fed to buy GSE paper directly. That bond investors who held MBS assume that the duration of their MBS would shorten due to increased refis and they bought long maturity bonds to maintain duration.

The outlook for the dollar is very much in dispute. Macro Man thinks we are years away from serious dollar weakness:

So in Macro Man’s view, any dollars “created” by the Fed to expand its balance sheet (and let’s not forget, they have yet to really crack out the printing presses by not sterilizing their asset purchases) will merely partially offset dollars lost through de-leveraging and the implosion of the shadow banking system, rather than finding their way into new the purchase of fresh turds.

Paul [Krugman] graphs the monetary base, which increased by 72 percent from September 10 to November 19 of this year. We should also note that the money supply – whether measured by M1 or by MZM – has increased by less than 1 percent. Over the same period, this has been a very substantial increase in bank reserves. Much of what the Fed has been doing has been to accommodate this increase in bank reserves so as to avoid a fall in the money supply..

The concern I have is the authorities keep saying the objective of this exercise is to get banks lending again….now….which presumably means on top of all the loans already made. Their aims are bigger than what Macro Man suggests, at least as far as I can tell (the latest example: an economist I know who has the ear of some policy makers suggested that PE firms buy banks, to shore up the leveraged loan market. Guess every underwater credit gets a rescue.)
And Jesse does a particularly brutal takedown of the Krugman argument (a specific illustration of one of our pet observations, “persisting in a failed course of action is not a sign of intelligence”):

However, to try and make the case that the Fed can “only” control reserves and the currency base, the monetary base, is an old canard trotted out by the likes of Greenspan and his ilk when they wish to make the case that things are happening, like enormous bubbles, that are beyond the Fed’s control. This is a Clintonian use of the word ‘control’ and is always and everywhere rubbish.

The Fed’s power, its influence, is profound, and ever moreso in this era of aggressive financial engineering. Krugman uses that narrow argument to point to the Adjusted Monetary Base as his sole metric and say, “See the monetary base went up in the Depression in his Chart 1, just as it is today in Chart 2. Therefore there was no error from the Fed at that time because it was all that they could do.”

We have noted that the devaluation of the dollar (1934) was key to getting the stricken US back on its feet: Jesse makes the same obsersation. But getting the dollar cheap enough to restore our trade balance is a fraught exercise. Too precipitous a decline risk a currency crisis and much higher dollar funding costs. And worse, the dollar has to be perceived to be likely to stay at a lower level on a sustained basis to lead to increased investment and skill building in export oriented industries (we have ceded entire industries, like shoe manufacturing, when we ought to have been able to retain some of it. However, executives at manufacturers have told me that Wall Street pushed hard for offshoring, seeing it as a plus for the bottom line, when the calculus was often not so straightforward).
The counterargument comes from Chris Watling via the Financial Times:

The outlook for the dollar is poor.

In the short term an expected equity market rally, quite plausibly the beginning of a cyclical, although not secular, bull market should bring an end to the dollar’s recent “repatriation rally”. The inverse correlation of the dollar and the S&P 500 is well established and not expected to break any time soon, given the global macroeconomic backdrop. The short term trend should be further reinforced by the broken financial system which impairs the US economy’s ability to releverage and mutes the strength of its cyclical recovery. The inability to releverage precludes the US from leading the global economy out of this recession. That also reinforces the dollar’s short term unattractiveness.

In the medium term, the US economy faces significant, albeit not insurmountable, structural problems. In particular the interaction of a heavily indebted economy with a broken financial system suggests a decade of poor domestic economic growth as savings are rebuilt and trust in the system restored. The US is a debtor nation and owes the rest of the world more than $2,000bn (up from $750bn as recently as 2000). Indeed both the household and the government sectors have been dis-saving in recent years – a trend that now needs to reverse. All of which suggests an extended period of sub-par domestic economic growth….

A failure of the initial set of policies to reflate the economy is likely to lead to the next, more risky, set of policy choices – those involving unsterilised intervention. Given the breakdown of trust in the financial system, the lack of savings by the US and the continued deleveraging of balance sheets, however, those initial policies, aimed mostly at supporting the economy through creating credit (rather than increasing savings) seem destined to fail.

On the energy shares front, one could attribute that to the stock market looking further out than commodity markets and anticipating recovery. But that contradicts the deflation reaction in bonds. And in the Great Depression, commodities was the first asset class to recover, rebounding before stocks did.

A possible culprit is Wall Street analysts being slow to cut earnings forecasts in light of deteriorating fundamentals (and perhaps reluctance to reverse uber bullish calls of last summer so quickly). Reader Michael provides the latest forecast from Merrill Lynch (click to enlarge): 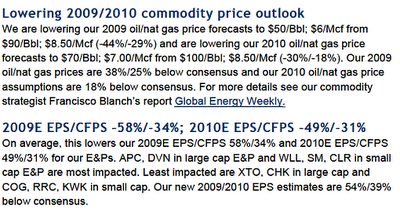 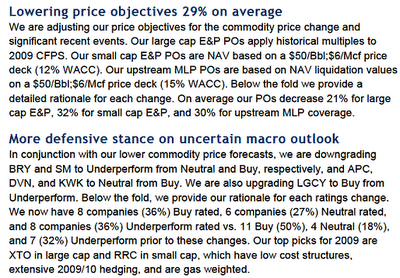 I don’t pretend to have answers here…..but some of these trends are not going to hold.