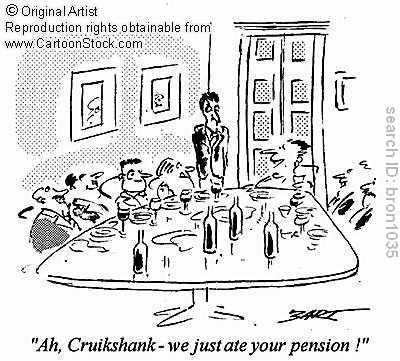 A buddy of mine emailed me urging me to write about CEO pensions. So how good are CEO pensions? I found a Forbes article from July 2007 stating that CEO pensions continue to soar:

Maybe “pension” isn’t the right word anymore to call what the world’s top bosses are raking in after they call it quits. “Incentive” is more like it.

The latest example: “Ma Bell” boss Edward Whitacre, 65, widely acknowledged as a revolutionary in the telecommunications business, will be handsomely compensated for his 43 years of service at AT&T.

His total package is a reported $161 million. But is he, or any of these oft-vaunted executives, worth it?

Paul Hodgson, senior research associate at the Corporate Library, believes such an award isn’t warranted, considering that Whitacre, whose last day on the job is June 3, has already been paid his fair share for working the past four-plus decades for the same company.

“They’ve been paying him salary, bonuses and long-term incentives for the 43 years he’s been there,” Hodgson said. “What is his pension for? As far as I know, the pension is to give you some financial security when you’re finished working. It’s not an incentive.

“I don’t even think it [the pension] should be there, to be honest. Not at that level,” Hodgson said.

Whitacre is due more than $161.6 million, including $73.8 million in deferred compensation and $84.7 million in a pension plan. He’ll also make more than $1 million per year for three years as a consultant for the company, according to AT&T’s proxy statement.

Bill Coleman, senior vice president of compensation at Salary.com, said the modern method of disclosure puts the entire pension amount in one lump sum when it is reported, as opposed to how it will be dispensed over time, which is why shareholders’–and the public’s–jaws tend to drop.

Coleman said there is some uniformity in the way companies calculate pensions, excluding other compensation and perks. Typically, the bean counters take 60% of the employee’s final salary, while taking into account the highest bonuses he or she received within the last five years, which may or may not have been directly related to performance.

The information is publicly available to shareholders who feel like doing the math. Most don’t, and that’s why people behave as if they have been blindsided by bloated pensions.

From there, each company has its own methods of compensation based on contracts and board approvals for any additional perks.

That’s when it can start soaring to heights most people can’t fathom, outside of winning the lottery, unless they’re the Whitacres of the world, who expect to maintain their pre-retirement lifestyles.

“There’s really no difference between $20 million and $200 million to most people,” Coleman said. “Even for your average reader, from where they’re sitting, those are basically the same numbers, because it’s so much more than the average American has.

“As you get closer to $20 million or $200 million, then you start seeing the difference between the two points,” Coleman said.

But at least Whitacre spent more than four decades with the same company, and pensions, if nothing else, are supposed to reflect corporate loyalty. Yet there have been cases where executives spent just a short time at a company before retirement but have walked away with huge packages.

Hodgson said certain companies are reconsidering these overweight pensions in favor of more “modest and sensible” packages, a practice that he hopes will become more widespread.

“Some [boards] might make it a little more difficult to hand over money just willy-nilly without relating it to performance,” he said. “But there are a bunch of executives out there who will say, “Oh no, that’s in my contract, and that’s what I get.”

JPMorgan Chase & Co. will delay contributions to 401(k) retirement plans for salaried employees until the end of the year and may reduce the payments, according to a person who received a company memo on the changes.

Workers making $50,000 to $250,000 annually will cease getting the contributions every two weeks and may see the benefits adjusted to a yet-to-be-decided amount, according to the person, who declined to be identified because the New York- based bank hasn’t disclosed the new policy. The dollar-to-dollar match for those earning less than $50,000 won’t change, the person said.

JPMorgan, which is the biggest U.S. bank by deposits and has a global workforce of about 200,000, doesn’t contribute to retirement plans of employees with annual salaries of more than $250,000.

“JPMorgan is using this period to tighten up all of if its costs structures right across the board,” said Richard Bove, an analyst at Rochdale Securities in Lutz, Florida. Chief Executive Officer Jamie Dimon is “just battening down the hatches.”

U.S. companies are cutting back matching contributions to employee retirement plans to save cash, and the trend is growing, according to a survey by Spectrem Group. The survey of 150 U.S. companies found that 34 percent have reduced or eliminated retirement-plan contributions since January 2008. In the next 12 months, 29 percent intend to scale back or eliminate their match, the survey showed.

At least 148 U.S. employers have stopped or reduced 401(k) matching contributions since June 2008, including General Motors Corp., Eastman Kodak Co., Motorola Inc., Sears Holdings Corp. Hewlett-Packard Co. and Xerox Corp., according to the Pension Rights Center, which is pushing for retirement savings alternatives to the 401(k).

As U.S. companies cut back matching contributions to employee retirement plans, I wonder how many CEOs are also cutting back their perks.

Here in Canada, the Globe & Mail reports that Michael Sabia is giving up his pension, two years of bonuses and any future golden handshake from the Caisse de dépôt et placement du Québec after mounting controversy over his appointment as chief of the huge pension fund:

Mr. Sabia, former chief of BCE Inc., told Caisse chairman Robert Tessier of his intention in a letter Monday when he indicated he was relinquishing his right to any bonuses for the first two years of his tenure “regardless of the results” the fund may achieve.

And in the event Mr. Sabia should be fired, regardless of the reasons, the newly appointed Caisse chief said he would refuse whatever amount he would be entitled to on leaving the position.

Mr. Sabia’s appointment two weeks ago has drawn criticism over how it was done.

Former Quebec premier Jacques Parizeau, for example, joined the growing ranks of those who accused the government of imposing Mr. Sabia’s nomination without giving serious consideration to other candidates.

Former Caisse board members and prominent business executives have been taking turns publicly questioning the speed of Mr. Sabia’s selection as well as what they say are the unusual circumstances of the hiring process.

The appointment came as the Caisse, which holds $120-billion in assets, seeks to repair its tattered reputation after a disastrous 25-per-cent loss for 2008, resulting in part from its huge exposure to the high-risk asset-backed commercial paper market.

Mr. Sabia got the nod only a week after the government appointed Mr. Tessier as chairman, responsible for finding a CEO. Mr. Sabia was also chosen just four days after Mr. Tessier first met with the Caisse board to form a hiring committee.

Mr. Tessier has also come under fire for not meeting with the only other candidate for the CEO job on the short list.

The way Mr. Sabia was seemingly swept into the Caisse’s corner office drew fire from opposition politicians who alleged the pension fund’s board simply rubber-stamped the hand-picked choice of Mr. Charest’s government.

“I think the process respected the letter of the law but not the spirit,” Yvan Allaire, a former Caisse director, said yesterday.

“It seems like a lot to have achieved in one week,” said Mr. Allaire, who was a board member until shortly before Mr. Sabia’s appointment on March 13, when his mandate was not renewed by the government. “I’m not questioning the idea that Mr. Sabia might be the best candidate for the position,” he added.

Claude Garcia, former head of Standard Life Assurance Co. of Canada and a former director, said he also has concerns with the process.

“I agree that this is miraculous,” he said about Mr. Sabia’s swift clearing of the hiring hurdles. “If I had been there, I would not have proceeded in that way.”

Caisse officials were not available to comment yesterday, but Mr. Tessier has said he is satisfied the hiring of Mr. Sabia was handled in a rigorous and correct fashion.

For Serge Saucier, an influential member of Quebec’s business community who is retired but still serves as a corporate director, the process appears to have been rushed. “It would seem to me to have been a little unusual. It seems that steps were skipped.”

Michel Nadeau, a former Caisse senior executive who is now executive director of the Institute for Governance of Private and Public Organizations, also said the Caisse fumbled the CEO hiring process.

Whenever I read Mr. Nadeau commenting on the Caisse, I take his criticism with a shaker of salt. When he was the number two guy at the Caisse, he ruled it with an iron fist, so his criticism of the hiring process is hypocritical.

Was the hiring process open and transparent? Of course not. Although I can’t prove it, my hunch is that Quebec Premier Jean Charest was fed up with the shenanigans at the ‘Basket Caisse‘ and he wanted someone to clean up the shop.

People are quick to criticize Mr. Sabia, stating that he did a terrible job at Bell Canada, but he’s accepted the challenge of his life at the Caisse and at least he isn’t there for perks and golden parachutes.

By the way, Mr. Sabia isn’t the only one to forgo bonuses. Reuters reports that board members of the two largest Dutch pension fund managers APG and PGGM have agreed to cancel their bonuses for 2008, the fund managers said on Friday:

The board members agreed not to accept bonuses because their clients — pension funds such as ABP and Zorg & Welzijn — have been unable to index pensions to inflation this year, and due to the fact they have incurred sharp investment losses, newspaper De Volkskrant reported earlier on Friday.

“It has been decided to put the bonuses on zero for 2008,” PGGM spokesman David Uitdenbogaard said. “First of all for the results over 2008.”

Uitdenbogaard added that because PGGM’s pension fund is unable to index pensions for their members this year, the decision to cancel bonuses was a signal of goodwill to the healthcare sector it represents.

APG spokesman Hans ten Brinke also confirmed that board members of the fund manager had agreed to forgo bonuses.

Newspaper De Volkskrant added that APG and PGGM have previously criticised unclear bonus criteria for executives at the companies they invest in.

Many Dutch pension funds have fallen into deficits due to the credit crisis and are working to file recovery plans with the regulator, the Dutch central bank (DNB), before a deadline of April 1.

Bonuses for the executives of listed financial firms have also come under criticism and the Finance Ministry has said it will seek to curtail bonuses among senior management at financial companies receiving government support.

Finally, Mark DeCambre, Wall Street reporter for The New York Post was on Tech Ticker stating that there actually is some truth to the we have to pay our top people outlandish salaries argument because bonus restrictions will drive talent overseas.

I have heard this argument before. Where are they going to go? I guess they can go to China, build up their securitization market over there and screw up their financial system.

This is all just more glue that binds a nation.