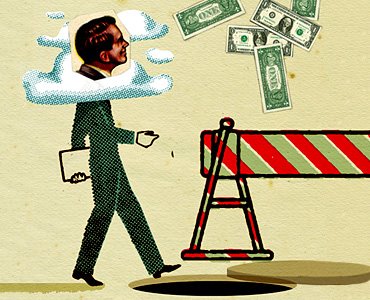 Pension funds have been hit hard by the stock market crash, losing about a third of their value in some cases, and there may be another problem.

Before the crash, some financial experts warned that pension funds were making overly optimistic projections of investment earnings in the decades ahead, often assuming about 8 percent a year.

Investment earnings, the heart of a modern pension system, are usually expected to provide two-thirds or more of the revenue needed to pay retiree benefits in the future.

In public employee retirement systems, a rosy forecast of future earnings means that fewer taxpayer dollars have to be spent to provide generous retirement benefits.

Lowering the projection of earnings by even a percentage point or two would create a funding gap of tens of billions of dollars.

CalPERS, an industry leader, warned its 1,500 local government members last fall that their employer contribution rates may increase from 2 to 5 percent of payroll in July 2011 if the stock market does not recover by June 30, the end of the current fiscal year.

Beyond raising rates to plug the big hole punched in pension funds by the stock market crash, the problem could get even bigger if forecasters decide that the critics are right, lowering projections of future earnings.

After the big drop in the stock market last fall, the CalPERS investment portfolio, once a high flier, had an average annual return of 3.32 percent for the last 10 years, well below the forecast of 7.75 percent.

A prominent critic of the high earnings forecasts, David Crane, was a rare appointee to a pension system board, CalSTRS, with a big-league background in investments.

After the governor put Crane on the CalSTRS board and he had served almost a year, the Senate refused to confirm the appointment in June 2006, ousting a board member who had repeatedly questioned the 8 percent earnings forecast.

Legendary investor Warren Buffet, in his annual letter to Berkshire Hathaway shareholders in February of last year, questioned the 8 percent earnings forecast common among the pension funds of major corporations.

“How realistic is this expectation?” Buffet said. “Let’s revisit some data I mentioned two years ago: During the 20th Century, the Dow advanced from 66 to 11,497. This gain, though it appears huge, shrinks to 5.3 percent when compounded annually.”

[Note: On the above calculation, a senior pension fund manager wrote me: “Don’t believe everything you read, take out your calculator.” I did and Buffet was right! CAGR= (11,497/66) raised to the power of 1/100 – 1 = 5.3%. But the senior pension fund manager and a senior bond analyst reminded me that if you look at total returns indexes, which includes dividends, then you get close to that 8% figure (dividends were much more important prior to 1960s).]

The founder of Vanguard mutual funds, John Bogle, told a congressional hearing on retirement security last month that corporate pension funds raised their assumed earnings from 6 percent in 1981 to 8.5 percent by 2007, far above historical norms.

“And the pension plans of our state and local governments seem to be in the worst condition of all,” Bogle said, adding parenthetically: “Because of poor transparency, inadequate disclosure, and non-standardized reporting, we really don’t know the dimension of the shortfall.”

The plight of the public employee pension funds has drawn a creative proposal from U.S. Rep. Gary Ackerman, D-New York, to shore up two of the nation’s troubled institutions.

Public pension funds would pool some of their money and buy $50 billion to $250 billion worth of stock in banks. In exchange, the federal government would guarantee the pension funds an annual return of about 8.5 percent.

Earnings forecasts were not a problem in the early days of California public employee pension funds, when investments were limited to fixed-income bonds and mortgages.

In 1966, a ballot measure, Proposition 1, allowed the pension systems to put 25 percent of their funds into blue-chip stocks. Advocates said the change would enable increased retirement benefits and lower employee and taxpayer contributions.

A measure to allow 60 percent of pension funds to be invested in stocks, Proposition 6, was rejected by voters in 1982. But two years later voters approved a far broader measure, Proposition 21, simply requiring that investments be “prudent.”

The ballot pamphlet argument said the measure, still in effect today, is similar to federal law covering private pension funds and is needed to prevent inflation from eroding the value of pension funds.

The ballot argument said pension fund trustees are “personally liable” if they invest funds without “the degree of care expected of a prudent person, who is knowledgeable in investment matters.”

The lifting of the restrictions on investing in stocks in 1984 came a few years after legislation allowed public employees to form unions and bargain collectively for labor contracts, which usually include retirement benefits.

Many public employee labor unions went on to negotiate contracts providing generous benefits — up to 90 percent of the final salary at age 50 for some police and firemen — that are expected to be paid mainly by pension fund investment earnings.

Retirement benefits provided by a labor contract have strong legal protection. In a widely watched test case, the City of Vallejo declared bankruptcy last year and asked a federal bankruptcy judge to overturn its labor contracts.

In hindsight, after a historic market crash that may force taxpayers to bail out pension funds, was it prudent to lift the restrictions on investing in stocks?

Calpensions asked an expert, Alicia Munnell, director of the Center for Retirement Research at Boston College.

“In the old days (before the mid 1980s), many public plans had limitations on equity investments,” Munnell replied by e-mail. “Virtually all have eliminated those constraints. Allowing more freedom to the investment managers is probably a positive development.

“The controversial area is the rate of return assumed in the actuarial valuation of pension plans. Public sector sponsors tend to assume high returns (8 percent or more), which makes the taxpayers’ commitment for future benefits seem small and encourages major expansion.

I always wondered where that 8% came from. With long-term bond yields at historic lows, this figure is pie-in-the-sky because pension funds will be lucky to get 8% a year in the next few years.

In fact, Reuters reports that fund investors see the slump continuing to 2010:

Investors overwhelmingly hold negative views toward credit rating agencies and the Securities and Exchange Commission, and they expect the market slump will continue into next year, a survey by the Greenwich Roundtable and Quinnipiac University found.

The survey of 89 wealthy private and institutional investors in late January and early February found confidence in regulators and in hedge funds was shaken during the credit crisis. It will take six to 12 months of healthier markets before investors jump back in, the survey reported.

“Leverage, liquidity and lack of confidence are still keeping the sophisticated investor on the sidelines,” Steve McMenamin, executive director of the Greenwich Roundtable, said in a statement.

As a result, he said, unprecedented numbers of limited partners refuse to make new commitments to alternative investments, such as hedge funds.

Greenwich Roundtable is an organization for investors who allocate capital to alternative investments, with members representing more than $6.4 trillion in assets.

One-third reported that as many as 40 percent of their fund managers suspended redemptions, while close to one-quarter were dissatisfied with the way redemption gates were currently structured. Ten percent of investors complained gates were being abused.

These LPs should have checked those gait clauses more carefully before committing the big money to hedge funds. It’s too late to whine about it now!

[Note: I am skeptical of any hedge fund ETF that charges 0.9% per year. Investors should ask who is on this platform and how they performed over the past 12 months. A better solution for investors looking for “passive” liquid exposure to hedge funds is to replicate hedge fund indexes using a few futures contracts (this is tricky too; contact me for more details).]

But that 8% projection of investment earnings needs to come down. Pension funds and their stakeholders need to reassess their growth projections and realize that overly optimistic projections will only aggravate their pension deficits.