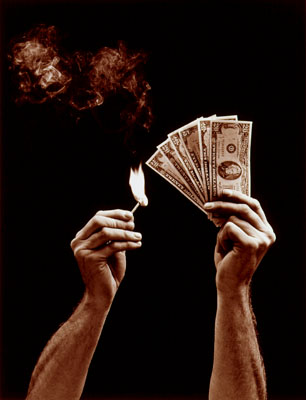 A follow-up on Friday’s post on what happened to CAW’s pension guarantees. The Globe & Mail’s Andrew Steele writes on the tragic history of GM’s pension:

It needs to be said again: The NDP government in Ontario really screwed up when they absolved General Motors of meeting their pension obligations.

(I’ve covered the whole sordid history on the NDP and pensions here and talk about the GM pension challenge here.)

Despite being deemed by the NDP as “too big to fail,” GM has now failed.

Today, GM is basically owned and operated by Barack Obama, and he’s thinking very seriously about bankruptcy. That would throw open the company’s obligations to creditors, including its shareholders, parts suppliers, its current workers and – most tragically – its former workers.

Bankruptcy could force the “wind-up” of GM’s pension plan. Thanks to chronic underfunding of their pension obligations, there is not enough money to pay out all the former and current employees. If GM is restructured into a much smaller company, it may not be able to meet its obligations and there could be an impact on the pensioners.

But the impact of that move would be very costly to everyone else in the province.

GM’s outstanding pension liability – from what I can cobble together – could be as much as $6-billion.

That is $461 for every man, woman and child currently living in Ontario.

Or to put it another way, that’s more than the amount the average taxpayer pays in their Ontario Health Premium, the tax Dalton McGuinty brought forward to such rancour in 2004.

Certainly, the province will have to play a role in protecting pensioners hurt by a potential bankruptcy.

But Ontario can’t enter those negotiations having already written a blank cheque. They have admitted there isn’t enough money in the Pension Benefits Guarantee Fund, and the CAW responded with a howl of protest.

But the CAW needs to accept a share of the blame for today’s circumstances, along with GM’s management and the NDP.

As recently as last summer, the head of the Canadian Auto Workers was reassuring us all that pension failure was “so remote a possibility it’s not worth speculating on.”

A GM spokesperson was answering questions about pension obligations with: “We are going to be here for another 100 years.”

Neither would likely want to repeat those statement’s today.

GM was a company in need of a major transformation fifty years ago, and every year they got more hidebound and rigid. Instead of shedding defunct brands, management relied on accounting tricks like funneling wage pressures into off-book employee pension and health obligations.

Management was aided and abetted by union acceptance of rich pensions in exchange for more modest wage concessions. The UAW and CAW acquiesced to GM’s “Wimpy” strategy: “I’ll gladly pay you Tuesday for a hamburger today.”

The regulator also failed, thanks to the decision by the NDP to let GM skip out on its workers. The CAW’s Jim Stanford points to this move as the core of the current pension shortfall, and he is 100 per cent right.

Relaxing the pension rules was like giving a limping man a cane; it produced a dependency. Since that decision, the lower rates were built into GM’s structure and returning to paying the full obligation was too onerous for an already wobbly company.

But for someone who worked 30 years on the line, blame is not important. What’s next is what is important.

There is great news, fair news and bad news for GM pensioners.

The great news is that for the short-term their pensions are safe, the cheques will keep coming and they don’t need to panic. This is going to take months or years, so keep on living.

The fair news is that – after all the wrangling – GM pensioners will probably wind up with a pretty fair deal that sees them retain the vast majority of their pension and benefit package. There will be a reduction of some amount, but it will probably be in the neighbourhood of 4 per cent, not 40 per cent.

The bad news is that there are going to be scary days between now and then as the various sides negotiate a new future for Canada’s largest manufacturer.

There is plenty of blame to go around. Relaxing pension rules only delays the inevitable. Also, while GM’s Canadian pension is in dire straits, I am still wondering about the state of GM’s U.S. pension fund. As I wrote in the past, I am afraid it’s running on fumes.

This brings me to the Guardian’s question of the week, Are pensions a waste of money?:

For most people, making pension contributions makes sense only if you were the kind of child who guzzled all the weekly sweet ration on the way back from the corner shop. Neither the tax relief nor income provision arguments for contributing to personal pension plans are valid. So the only convincing argument is that if you have access to your retirement savings you may spend them and end up poor in your old age, so you had better put your money where you can’t get at it.

That said, there’s an incontrovertible case for putting your hand in your pocket if your employer will contribute to your pension plan if you do. The argument that follows relates purely to contributions to personal or stakeholder pension plans from your own income or capital resources.

Let’s start with tax breaks. For a basic rate taxpayer, the tax breaks on pension plans are worth no more than 7% – that’s the additional amount of capital and/or income you’d get from a pension plan if you paid basic rate tax both during before and after retirement.

So, to get an extra 7% you must lock up your money until age 55 at the earliest; be restricted to withdrawing a quarter of your capital tax-free; pay basic rate tax on every extra pound you withdraw during retirement – and if you die after starting to draw benefits have no capital to pass on to your heirs.

I say this is a lousy deal that you should refuse, and I think the figures prove me right. Voluntary pension contributions by basic rate taxpayers have been declining for years. This isn’t evidence of our woeful inability to save, as doom-tinged commentators suggest: it’s a rational decision by people who can tell a lemon from a peach.

The peach, for basic rate taxpayers saving for their retirement, is the Isa. The £600 per month maximum contribution will take care of most people’s retirement savings from income. And within a self-select Isa you can create a portfolio of investment funds with whatever types of investment (and risk) you want. In retirement, you can draw income and capital tax-free and leave any remaining capital to your heirs.

What’s not to like? Risk – but you get that with your pension plan investments too. And people who pretend to reduce that risk – for example with “lifestyle” funds – are simply using your desire for a security blanket to make easy money without necessarily making you any better off.

If you need to save more than £600 per month, just start a simple savings plan with a fund supermarket. If you invest in shares, you’ll pay no more tax than if your money was inside a pension plan – all you lose is the initial tax relief, which will be clawed back out of the tax on pension income in retirement.

For higher rate taxpayers, I agree that the tax relief means pension contributions make sense. For them, I say grab it while it lasts.

I’ve argued my case against pension contributions with many advisers, who usually end up saying: “You’re right, but my clients need to put money where they can’t get at it.” To which I reply: is there any other area of your life where you would buy a second-rate product because you don’t trust yourself with a good one?

Let’s take as a starting point the premise that in retirement you won’t simply be able to rely on fantastic levels of accumulated or inherited wealth; that you will at some point want the choice of not working until the day you die and that you are now in a position to save at least some of your income.

In other words, you need to put money aside – but why in a pension? To which the simple answer is that it is the most efficient and secure way to achieve financial independence in later life.

Then there are tax breaks. For every £80 you pay into your pension, the government pays in a further £20. In addition, higher rate tax payers can claim back a further £20 of relief for every £80 they pay in. No other investment offers such a generous up-front boost to your savings – not when they are combined with the freedom to invest in just about any unit trust, company share, debt instrument, commercial property, deposit account or commodity of your choosing.

Capital gains in the pension are tax free, as is some investment income. What’s more, when you get to retirement, not only can you take 25% of your pension fund as a tax-free lump sum but you get significant tax breaks on your income as well. For over-65s, the first £9,030 of your annual income is tax free. This means that for couples, if you can split your savings between you, you could be enjoying a household income of more than £18,000 a year tax free.

In the event that you die before retirement, your survivors can receive either a tax free lump sum (in the case of personal pensions) or an income for life (from an occupational pension scheme).

At some point you will have to convert your accumulated savings into a retirement income. For most people, the most efficient way to do this is by buying an annuity. You do, though, have the choice not to buy an annuity if you would prefer, and while the death benefit rules become increasingly restrictive as you get older, the point is that you are in control of what happens to your savings.

Drawing a direct comparison between pensions and Isas – the most obviously alternative retirement savings vehicle – I suggest that you use a pension instead. Pension savings are locked away to make sure that they are there for your retirement, and they have more generous tax breaks and higher contribution limits.

In retirement, annuities pay an income for life, so irrespective of how long you live that income will keep paying out.

You might want to run Isas alongside your pension, using them for medium- to long-term savings as well, but for most people, a regular monthly contribution into a pension is the most efficient and effective way to build financial independence in later life.

What do you think?

Are you living comfortably on a pension, or do you wish you’d never gone near one? Does the prospect of retirement terrify you? What plans have you made?

I believe that we need a complete overhaul of global pension systems in the OECD so that people can retire in dignity and security.

The global financial crisis exposed severe weaknesses in the current pension systems which lack a sound governance framework based on transparency, accountability, risk management and open communication between shareholders, beneficiaries and pension funds.

Unless we take serious steps to shore up our pension plans, we will see more money being wasted in bad investments that do not take into account the best interest of the people contributing to their retirement plans.

I wish you a Happy Easter.