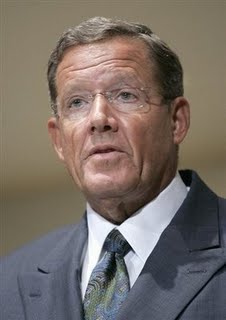 When the man in charge of the second largest borrower in the U.S. is willing to lose his job due to his discomfort with the FASB’s shift in accounting rules, you can bet that the tragic fallout of all the “market buoying” recent events is only a matter of time.

Somehow this noteworthy event, which happened over a week ago, passed substantially unnoticed until Zero Hedge friend Jonathan Weil at Bloomberg dug it up. Charles Bowsher, who was most recently Chairman of the Federal Home Loan Bank System’s Office of Finance and previously served as U.S. comptroller general may be the only truly honorable man in the socialist nexus of politics and finance. The reason for his departure from this critical post – his discomfort in vouching for the banks’ combined financial statements. And as Weil puts it succinctly: “Now the question for taxpayers is this: If Charles Bowsher can’t get comfortable with these banks’ financial statements, why should anybody else be?” Why indeed.

If Bowsher was merely involved with some marginal organization, this could be perceived as a hypocritical attempt to score populist brownie points. However, the FHLB is among the governmental entities at the heart of the current problem. Zero Hedge has written previously about the FHLB and its critical role in the ongoing housing crisis, but in a nutshell “The Office of Finance issues and services all the debt for the 12 regional Federal Home Loan Banks. That’s a lot of debt — $1.26 trillion as of Dec. 31, making the FHLBank System the largest U.S. borrower after the federal government. The government-chartered banks, which operate independently, in turn supply low-cost loans to their 8,100 member banks and finance companies. If any of the FHLBanks were to fail, taxpayers could be on the hook.”

Ah, the poor taxpayer about to get duped one last time. And the immediate reason for Bowsher’s decisions: his concern with the methods used for determining when losses on hard-to-value securities should be included in banks’ earnings and regulatory capital. And it gets much worse:

For the fourth quarter of 2008, the FHLBanks said their total preliminary net loss was $672 million. It would have been many times larger, had they included all their red ink.

The year-end balance sheet at the FHLBank of Seattle, for example, showed $5.6 billion of non-government mortgage-backed securities that it says it will hold until maturity. Yet the estimated value of those securities was just $3.6 billion. The bank, which reported a $199.4 million net loss for 2008, said the declines were only temporary. They’ve been anything but fleeting, though. Most of those securities have been worth less than they cost for more than a year.

The FASB’s rules on this subject, which have never been well defined, are now in flux. Today, after caving in to pressure by the banking industry and members of
Congress, the Financial Accounting Standards Board is set to vote on a plan to relax its rules on mark-to-market accounting, so that companies can disregard market prices and ignore losses on their securities indefinitely.

Bowsher is not new to taking hard political stands:

As comptroller general, he was in charge of the General Accountability Office, the investigative arm of Congress. At his direction, the GAO was among the first to warn the public about the brewing savings-and- loan crisis during the 1980s. He testified before Congress in 1994 that there was an “immediate need” for “federal regulation of the safety and soundness” of all major U.S. derivatives dealers. (How’s that for prescient?)

Most recently, in 2007, he led an independent committee that issued a blistering report on financial missteps at the Smithsonian Institution, whose board of regents included U.S. Chief Justice John Roberts.

And how does the FHLB spin this event?

“Mr. Bowsher has expressed his concerns to me around the complexity of valuing mortgage-backed securities and the process of producing combined financial statements from the 12 home loan banks. I don’t think it’s appropriate for us to speak for Mr. Bowsher.”

So: to paraphrase – one of the men who knows the ins and outs of the financials of banks involved in the mortgage crisis more intimately than even Bernanke and Geithner, let alone Obama, is saying that the newly implemented changes by the FASB will throw the whole system into tailspin and he want none of it.

If this isn’t the most damning condemnation of the Kool Aid the administration, the Treasury, the Fed, the FASB, the FDIC, and all the other alphabet soups are trying to make the common U.S. citizen drink and have seconds, then nothing else possibly could be…. of course until Bowsher is proven right and everything collapses into the smoldering heap of defaulted MBS still marked at par on various liquidating banks’ balance sheets…

Oh and yes, let’s hold a moment of silence for Lehman which held billions of mortgage backed securities that it too was “holding until maturity.” Well, Lehman is no more, and all these securities now trade, in the form of the company’s general unsecured claims, at the generous price of 12 cents on the dollar… Furthermore, one can’t say the market is illiquid – the bid-ask spread is only 1 cent. And as there are over $150 billion of these claims floating around, one can’t say the market is in any way limited from a price discovery standpoint.

Maybe if more honest leaders follow in Bowsher’s unique example, the general population will finally start seeing though the everyday lies and misinformation coming out of D.C.