With articles like this coming out of Time magazine, it is inevitable that in the immediate future, the United States will be split into two partisan camps. However, this will not be the traditional schism of republicans vs. democrats, contrary to Mr. Barney Frank’s attempt to start ideological partisan warfare. The real split will be of naive, easily-manipulated, small-time mom and pop investors, who only care about looking at their daily yahoo finance screens and 401(k) statements, seeing more black than red, and only focusing on what happened in the immediate past, and the forward looking taxpayers, who see the upcoming budget deficit fiasco, the social security ponzi scheme, the Medicare/Medicaid debacle, the ridiculous underfunding in public and corporate pension funds, the rising city and state taxes, the shuttering factories, the rising unemployment, the plummeting American production base, the “seasonally” upward-adjusted economic data coupled with consistently downward revised prior economic releases, the increasing savings rate and the multi trillion discrepancy in consumer purchasing power. The taxpayers are becoming angrier and angrier at the net present value destruction of future opportunities of being a U.S. citizen, while investors cheer every piece of information (whether or not supported by facts) that provides a push to their current net worth, ignorant of what this may mean for the future. There will come a point where this schism reaches a boiling point, in the meantime, the paradox is that so many of the taxpayers are also investors, who are caught in a tug of war with themselves on what the proper response to the crisis should be: happy as a result of bear market rallies, or sad when they put the facts into perspective.

Speaking of facts, Time contributing author Douglas McIntyre may have considered presenting some to justify his thesis that the “the great banking crisis of 2008 is over.” Pointless regurgitation of secondary viewpoints serves no purpose in the mainstream media, especially not in formerly reputable mainstream media such as Time (Zero Hedge’s subscription is running out with no plans for renewal). It is even worse when the MSM represents as “facts” the disinformation by banks, who claim that the downward inflection point has been reached and ignore the full context: a much weaker mark-to-market methodology, the FDIC and SEC aiding and abetting wholesale “pennies on the dollar” blue light specials of bankrupt banks such as Wachovia and Washington Mutual, taxpayer funnels such as AIG being used to pad the top and bottom line, a financial system balance sheet which has over 70% of its assets guaranteed by the Fed and the Treasury, and lastly, a spike in commercial real estate deterioration to unprecedented levels. Mr. McIntyre’s article is childish and unsubstantiated to the point of generating derisive laughter from his readers. Then again, a casual glance of his self-description in Seeking Alpha is enough to put his opinion into perspective: Mr. McIntyre “knows technology cold, has a sharp understanding of what’s priced-in to [sic] stocks, and writes extremely well (as you’d expect).” How a self-ascribed technology specialist (who writes “so well” that he makes grammatical mistakes in the very same sentence making that claim) ends up stating “the financial crisis is over” is beyond Zero Hedge’s meager attempts at comprehension. What Zero Hedge is not beyond, however, is presenting the facts and not perpetuating the disinformation fallacy.

The cold facts – “When you stare into the abyss long enough, the abyss stares back at you.”

Why is everyone so afraid to stare at the proverbial abyss? Readers of Zero Hedge know all too well, about my fascination with the economic fundamentals, and my desire to expose the real abyss in all its deep glory.

I dare anyone: McIntyre, Kudlow, Geithner, Obama, to look at the chart below and tell me we are in a V shaped recession. Yes, ISM may be bottoming (at record low levels which is not indicative of much), and unemployment may soon be bottoming (it has not, yet somehow the market believes it is just a matter of time), however one look at the chart of accelerating commercial real estate delinquencies and what they mean for the multi-trillion commercial real estate market should stop any V-recovery fans dead in their tracks. 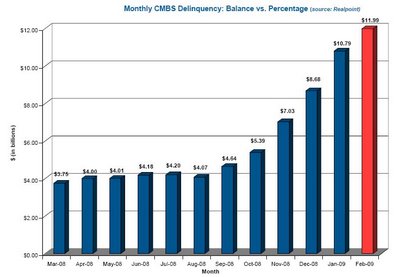 I will present some more factual glances of the abyss, courtesy of the good folk at Realpoint.

Through the February 2009 reporting period, the delinquent unpaid balance for CMBS increased by a substantial $1.2 billion, up to a trailing 12-month high of $11.99 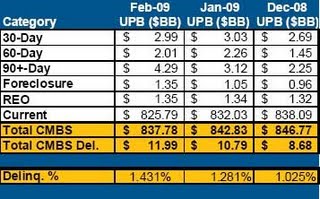 billion. Overall, the delinquent unpaid balance grew for the sixth straight month, up over 244% from one-year ago (only $3.48 billion in February 2008) and now over five times the low point of $2.21 billion in March of 2007. While a slight decline was noted in the 30-day and 60-day delinquent loan categories, the distressed 90+-day, Foreclosure and REO categories grew for the 15th straight month – up over 216% in the past year. This increase took place despite another $53.9 million in loan workouts and liquidations reported for February 2009 across 20 loans. Ten of these loans at $19.1 million, however, experienced a loss severity near or below 1%, most likely related to workout fees, while the remaining 10 loans at $34.8 million experienced an average loss severity near 46%. As additional pressures are placed on special servicers to maximize returns in today’s market, loss severities are expected to increase while liquidation activity is expected to slow further as fewer transactions occur. This would be the result of reduced or distressed asset pricing, lower availability of funds, and increased extensions of balloon defaults through the end of 2009 and into 2010.

The total unpaid balance for all CMBS pools under review by Realpoint was $837.78 billion in February 2009, down from $842.8 billion in January. Both the delinquent unpaid balance and delinquency percentage over the trailing twelve months are shown in the chart above and the one below, clearly trending upward for the timeline. The resultant delinquency ratio for February 2009 increased to 1.431% from 1.281% one month prior. Such ratios above 1% reflect levels not seen in since April 2005. What is more concerning, however, is that the delinquency percentage through February 2009 is more than three times the 0.399% reported one-year prior in February 2008. The increase in both delinquent unpaid balance and delinquency ratio over this time horizon reflects a slow but steady increase from historic lows through mid-2007.

Assumptions based on three-month historical data: 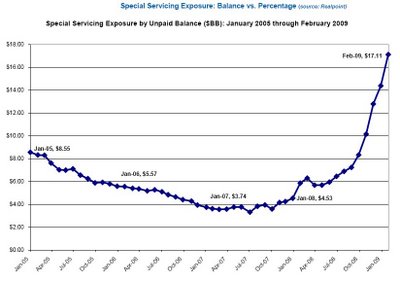 Realpoint’s default risk concerns for the more recent 2005 to 2007 vintage transactions relative to underlying collateral performance and payment ability are more evident on a monthly basis. B 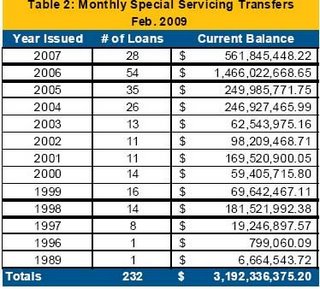 oth the volume and unpaid balance of CMBS loans transferred to special servicing on a monthly basis continues to raise questions about underlying credit stability in today’s market climate for these deals, as evidenced by attached table. An additional 117 loans at $2.28 billion issued from 2005 through 2007 were transferred to special servicing in February 2009, mostly (but not only) for delinquency. Such figure reflected 71% of the current month’s transfers and 13% of total special servicing exposure in February 2009. Furthermore, over 51% of delinquent unpaid balance through February 2009 came from transactions issued in 2006 and 2007, with over 27% of all delinquency found in 2007 transactions. Extending a review to include the 2005 vintage, an additional 16% of total delinquency is found meaning over 67% of CMBS delinquency comes from the 2005 to 2007 vintage transactions. The chart below shows the increased delinquent unpaid balance relative to these three vintages over the past six months, clearly reflecting the increasing trends highlighted in recent months. 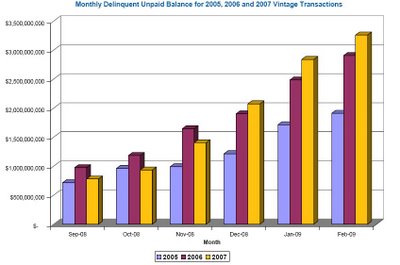 Throughout 2009, it is expected to see high delinquency by unpaid balance for these three vintages due to aggressive lending practices prevalent in such years. Also some loans from the 2008 vintage are expected to show signs of distress and default in cases where pro-forma underwriting assumptions fail to be met at the property level.

Focusing on deals that have seasoned for at least one year, the investigation reveals the following:

Other concerns/dynamics within the CMBS deals monitored which may affect the overall delinquency rate in 2009 include:

The rate at which liquidated or problematic CMBS credits are replenished by newly delinquent loans remains a concern, especially regarding further growth to Foreclosure and REO status (evidence of additional loan workouts and liquidations on the horizon for 2009). Through February 2009, newly reported CMBS delinquency continued to outpace monthly liquidations by a very high ratio, raising concerns for further deterioration in the market.

In February 2009, 10 loans for $34.8 million experienced an average loss severity near 46% – a clear reflection of true loss severity in today’s credit climate. Higher levels of loss severity will be the norm in 2009 for those loans that experience a term default where cash flow from operations is not sufficient to support in-place debt obligations.

The total balance of loans in Foreclosure and REO increased for the 16th straight month to $2.696 billion from $2.39 billion in January 2009, despite ongoing liquidation activity. These figures had declined steadily for some time through mid-2007, reflective of expedited loan work outs, but continue to be replenished with new loans due to aggressive special servicing workout plans. The chart below also shows the rapid growth of loans reflecting 30-day delinquency in the later half of 2008, transitioning rapidly into more distressed levels on a monthly basis, thus supporting the use of 30-day defaults as an early indicator of workouts to come in 2009. 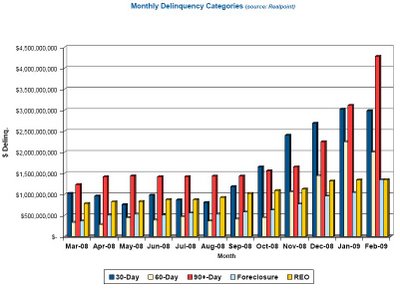 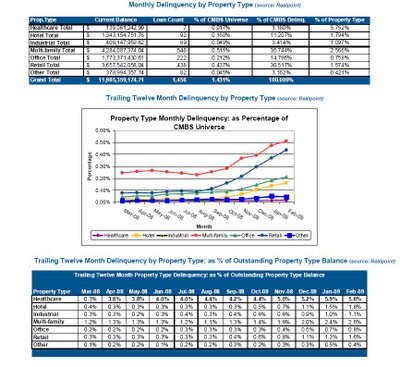 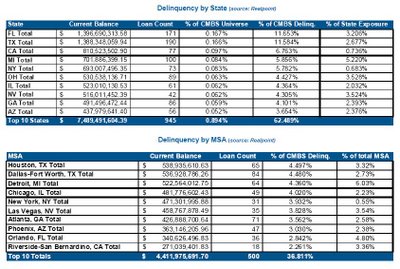 …And the facts go on and on and on… yet not one of them is mentioned in McIntyre’s “analysis”.

Commercial real estate is nothing more than a proxy for the intersection of the two historically core driving forces in the U.S. economy: real estate values and business conditions. And as the facts above indicate, the deterioration is only starting to pick up.

But what about all the stimulus programs skeptics will ask? The bail out packages? The constant funneling of taxpayer money into every underperforming segment of economy?

The truth is that the more taxpayer money is dumped to try to fill the abyss, it may become marginally shallower, but only at the expense of it getting wider. At some point soon (if not already), the U.S. economy will be unweenable from the trillions and trillions of taxpayer subsidies all the while it becomes more indebted to both its investors and taxpayers, further exacerbating the abovementioned paradox (presumably not without a motive). As the multi-trillion CRE crash continues to deplete the left side of the financials’ balance sheet with an exponentially growing pace (and I have not even touched on the credit card topic), the banks will be left scratching their heads what accounting rules to bend, which insurance companies to implode and get another AIG-like piggybank, how to break REG-FD more and more creatively with select memo leaks, how to manipulate the market, and how to make the Tsy curve becomes even more upward sloping with the compliments of the Fed and the Treasury. In the meantime the disinformation rift between the American taxpayers and investors will keep growing until inevitably, one day, it will escalate to the point where empty promises on prime time TV by the administration’s photogenic representatives will not suffice, and real actions that benefit future American generations will be demanded… What happens after I have no idea.

Disclaimer: Zero Hedge is currently flat in its SRS exposure, after being long from the $50s and unwinding in the $100s