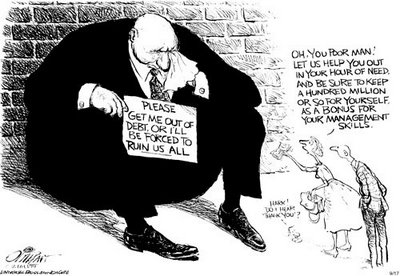 Leah McLaren writes in the Globe and Mail that Generation debt is in for a rough ride:

A few years ago, I interviewed University of Toronto demographer David Foot, author of the bestseller Boom, Bust & Echo. Over tea at a campus pub, he assured me that my generation – which included the youngest of what he dubbed the “busters” and the eldest of the “echos” – was in for a sweet ride. We were destined to be prosperous and “in demand,” he said, as a result of being born in the mid-to-late 1970s, when the birth rate was at an all-time low.

What Foot didn’t know was that an economic meltdown would conspire to all but scupper my generation’s hopes and dreams, just as they seemed about to come to fruition. The lucky, plucky, anointed-for-greatness offspring of the first boomers, now in our late 20s and early 30s, have fared the worst in the current financial crisis, all things considered.

After finally managing to land decent jobs, we are the first ones being laid off, because of lack of seniority. Bad news, since we’re also mortgaged to the hilt, having bought our first houses on credit just as the market peaked (in the United States, it was the same generation of first-time home buyers who were swindled into subprime mortgages).

As for future generations? That’s our problem too. In recent months, many of us have found ourselves not only homeless and jobless but pregnant to boot – the recession having struck smack in our childbearing years.

In the midst of all this carnage, who’s crying the blues? Why it’s the baby boomers, of course! The generation in charge – the one that created and perpetuated the unsustainable financial model that led to the current collapse in the first place. Haven’t you heard the bad news? Their investment portfolios are down. They’re not sure they can afford to retire the way they had planned to. They might have to sell the cottage to pay for the divorce!

And as for their jobs – you know the high-paying, secure ones at the very top of the pay scale? Well, they’re going to have to hang onto those for a while longer than they had thought. At least until they get old and sick enough to max out the health-care system and the national pension fund.

It’s a wonder my generation isn’t demonstrating in the streets. Instead, we’re doing the opposite. We’ve formulated a strategy to get through this: We’re going to close our eyes and plug our ears and hum Mary Had a Little Lamb till it’s over.

In the cover story in the latest issue of Toronto Life, Katrina Onstad writes about the boundless enthusiasm the younger generation is showing in the face of an economic meltdown. Her over-educated, under-employed interview subjects are so relentlessly positive about the future that Onstad at one point blurts, “What if it’s not okay? What if it’s breadlines for everyone? What if it’s Grapes of Wrath?” To which her 25-year-old subject responds with a puzzled, “I just don’t go there. I just don’t think that way.”

As someone just a few years older, I do. The rest of my generation may not know it yet, but we have been robbed. Our famous self-esteem and sense of entitlement – instilled in us by over-indulgent boomer parents – can only shield us from the truth for so long: The demographers were wrong. We are in for a very rough ride. Much rougher than our parents.

My grandmother grew up during the Depression. As her family’s fortunes fell, she remembers hobos at the back door begging for table scraps. For my mother, growing up in the fifties, it was all pony club and tennis lessons. There were no ponies for me as a child, but things were comfortable. Just comfortable enough that I always assumed that, with a little hard work and perseverance, better things were coming my way.

Turns out this was a naive assumption.

One generation after another frittered away its wealth until the boomers came of age and – in a moment of supreme overconfidence – placed everything that was left on a bad bet.

This time round, my generation has more in common with the hobos than the pony clubbers.

Of course, the bleeding will eventually staunch, but the loss of the wealth and economic stability accumulated in the postwar boom will reverberate right through the prime of our lives. All the stuff our sense of entitlement entitled us to – home ownership, job security, holidays, savings, university funds for our kids – just disappeared. It’s not that these things are impossible. But we’d be wise not to count on them.

Perhaps positive thinking was our mistake in the first place. As Foot pointed out in a telephone interview this week, “Your generation has had the lowest interest rates in 20 years. You had jobs in your 20s. Some of you were overly optimistic on your future earnings and bought much bigger houses than you should have.”

You can say that again. And now it’s last hired, first fired. Foot concedes that the situation isn’t good. “You have all of the responsibility of adults and none of the protection,” he said. “I didn’t say there wouldn’t be ups and downs.”

As if things weren’t bad enough, we are also going to have to listen to our parents – the generation that steered us into the iceberg into the first place – fret themselves to death as the ship goes down.

Just the other day, my mother called me up to tell she was worried about her husband. The economy was stressing him out, she said. His blood pressure was up. It was so bad that they had stopped opening their monthly financial statements. When I reminded her – through gritted teeth – that both of them have good salaries and a manageable mortgage, she reluctantly agreed.

Which was when it hit me: Not only was I unlikely to get through this recession unscathed, I probably wasn’t going to get an inheritance either. It had never occurred to me that I might need one, and just as I thought I might, the prospect was evaporating like a distant mirage.

And to think I had spent my 20s feeling optimistic. Thanks for nothing, David Foot.

My friend Tom Naylor calls this the “new generation of whiners”. Ms. McLaren has a point, but it’s time to stop whining and get to work to fix the “abuses of the system.”

Each one of us, poor or rich, can do our part to make this a better world. True change only comes when people take the time to properly inform themselves of what is going on around the world and that means always questioning what you read in mainstream media.

There is nothing that prevents you from volunteering your time to a local charity or doing your part to write on social and political issues that concern you, especially now that blogs are available to everyone who has access to a computer.

As far as pensions are concerned, stop believing that everything is fine and “over the long-run” your pensions are safe. If you really believe that, you are in for a rude awakening.