He has four wives and he faced 783 counts of corruption Globe and Mail (hat tip reader Gary). No, it’s not about anyone from the Bush or Obama circles.

Is America repeating Japanese history? Free Exchange. Late to this, but still worth reading.

Choosing Its Own Path, Ford Stayed Independent. New York Times. Ford hocked all its assets in at the end of 2006 to secure a cash warchest. Might one surmise that Alan Mulally saw the credit frothiness and knew it was going to end soon, and probably badly? If so, he’s too smart a poker player to say so.

When Meredith Whitney Calls, Should You Listen? Wall Street Journal. A nasty, slipshod piece. I’ve occasionally been passed Whitney’s research, and it is first rate. And she made many more correct calls than the author of this cheap shot article mentions.

Why did the Fed, the Bank of England, the ECB, the Bank of Japan and the Swiss National Bank announce a dubbel openslaande porte-brisée deur? Willem Buiter. Anyone who has the answer goes to the head of the class.

Insight: Gold standard debate roars on Gillian Tett, Financial Times. The fact that Tett is writing about this means it is and will be taken seriously, since Tett is read by central bankers. Matt Dubuque finally being proven wrong.

Brother from another mother. Two joeys look out of a mother wallaby’s pouch at the small zoo in Gettorf, northern Germany. One of the two young animals was adopted by the mother. 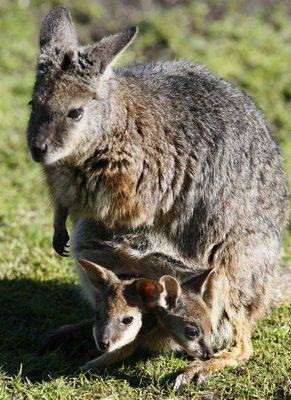