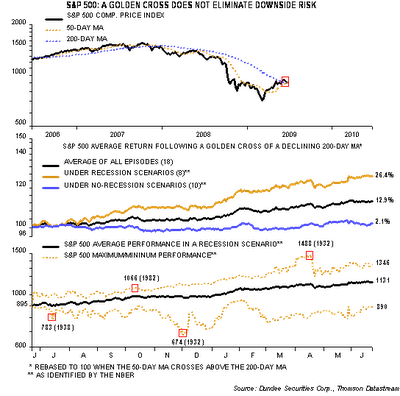 My favorite strategist, Martin Roberge of Dundee Securities, sets the record straight on the Golden Cross in his latest strategy comment:

Much has been said about the positive implications of this week’s Golden Cross (GC) on the S&P 500. However, little emphasis has been put on downside risk analysis. Even though GCs have normally preceded periods of above-average stock market performance, history also reveals that important pockets of market weakness remain. In fact, our analysis suggests that despite this week’s GC, odds of a re-test of March lows should not be taken down to zero. A re-test is not our baseline scenario, but we wanted to set the record straight as far as the GC is concerned.

A GC occurs when an index’s 50-day moving average (MA) rises above its 200-day MA. This event occurred Tuesday on the S&P 500. Since the GC is of a declining 200-day MA, we looked at the implication of such a cross in terms of forward stock market performance. We also screened for episodes when the GC occurred through a recession as identified by the NBER. The forward performance of the S&P 500 appears in Exhibit 2 next page.

However, using daily data, the third panel of Exhibit 1 at right plots the S&P 500 average, minimum and maximum performance path under the recession case. With the index closing at 895 on June 23 (day of the GC), we can see that the 6-month downside risk is located at 783 and then 674 if we follow the path of the 1932 and 1938 GCs.

Bottom line. While the advent of a GC is a positive development for equities, many pundits failed to mention that such a cross does not exclude the possibility of a re-test of March lows. We wanted to set the record straight.

Another interesting comment came this week from legendary investor Jim Rogers, who now says he has no short positions:

Investor Jim Rogers said on Thursday that he sees prolonged economic problems and while he did not see much worth buying, he is not shorting any assets either.

He repeated a previous comment that he is selling his U.S. dollars and that commodities were the best investment bet.

“I have no shorts for one of the first times in my life,” Rogers, a co-founder with George Soros of the Quantum Fund, told Reuters TV in Singapore. “On the other hand I don’t see much to buy.”

He said huge borrowing by governments, particularly in the United States and Britain, would hurt their currencies and lead to future problems, though he picked the Canadian dollar as one of the “soundest” currencies.

“I’ve got out of my pounds. I will be getting out of my (U.S.) dollars soon,” he said, repeating his view that commodities were the best place to be, with metals having gained more than stocks this year and long-term potential for soft commodities.

“I’d rather be a farmer than a stockbroker for the next couple of years,” he said. “No-one you went to school with became a farmer… so we have a shortage of farmers.”

I agree with Mr. Rogers, the “golden era” of financial services is over. We entered a prolonged bear market in that industry.

But he must be blinded or biased, focusing just on commodities when he says there is nothing to buy. Go back to read my comment on the investment labyrinth to see the key long-term themes you should be focusing on:

Of these, I think alternative energy and infrastructure are definitely on a long-term secular upswing.

The OECD reports that the world’s main economies are looking to “green growth” as the way forward out of the current crisis, opening up new prospects for climate-change negotiations ahead of the 15th Conference of the Parties of the UN Framework Convention on Climate Change (COP15) in Copenhagen in December.

Tomorrow I will discuss why smart money is going clean tech. As we wait for the U.S. Senate to pass the climate bill, there are tremendous opportunities out there that are worth investing in.