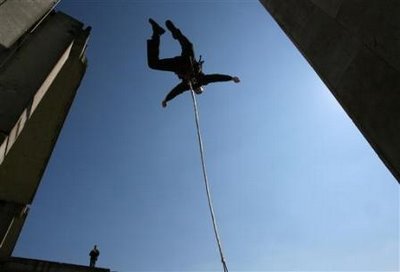 The Guardian recently ran a story, When hedge funds lose their mojo:

We’re not quite there yet, but hedge fund managers may soon need to start giving away toasters — or perhaps plasma TVs — to woo new investors. Forcing the funds to eat a little humble pie now would benefit hedge fund investors in the long run.

Most hedge funds are off to a decent start this year — the average return to date is 9.43 percent, says Hedge Fund Research. Yet it’s a particularly tough time for launching a new fund. In the first five months of 2009, just 40 new funds have begun reporting performance figures, BarclayHedge reports.
That’s a pittance compared with the same time last year, when 240 new funds started trading.
And investors, who were badly burned last year, seem more interested in pulling money out of hedge funds. This year the pace of redemptions is down only slightly from the fourth-quarter of 2008 — when investors pulled some $165 billion out of hedge funds.
Look for redemptions to continue well into the summer, as temporary “gates” that blocked investors from fleeing for the exits, start to get lifted at some big funds.
Sol Waksman, BarclayHedge’s president, says it will probably take “some period of sustained positive performance” before investors are willing to commit money to new funds.
But it may take more than a few “up” months for the hedge fund industry to get its mojo back.
So-called funds of hedge funds, big pools of investor capital which direct money to an array of funds, are fast disappearing.
The incredible shrinkage of funds of funds, which once accounted for 43 percent of all the money raised by hedge funds, means fewer places for managers to turn to for raising money.
Banks, meanwhile, continue to clamp down on financing for hedge funds.
After the easy credit of the last decade — when starting a hedge fund was nearly as easy as opening a lemonade stand — a period of anemic growth should be welcome.
As managers go begging for money, investors will get a lot more leverage in negotiating deals on the managers’ fees that had once been considered sacrosanct: the 2 percent asset management fee and the 20 percent cut of the profits.
Investors should also seek their freedom from capital lockup requirements. Forcing investors to lock up their money for anything longer than a quarter at a time only makes sense for strategies that take a while to generate results, such as a fund that invests in distressed assets or agitates for management shakeups.
Investors stand to gain if the great hedge fund debacle of 2008 leads to a lasting rollback in hedge fund fees and culture that has emboldened managers to do as they please.

The same thoughts were echoed in an article that appeared in the Economist, Caught Short:

The hedge-fund industry is making money again. Figures from Hedge Fund Research (HFR), a consultancy, show that the average fund gained 5.2% in May, the best monthly performance since 2000. Several sectors have earned double-digit returns so far this year.

The rebound comes after a traumatic 2008 for the industry, during which the average fund lost nearly 19% and there was a wave of redemption demands from investors. Assets under management have fallen by around $600 billion from their peak, leaving the industry with just over $1.3 trillion to look after.

Nearly 1,500 funds were liquidated last year, the population of the entire industry back in 1993. Although some new funds have been created, HFR reckons there were just 8,860 funds at the end of March, down from 10,096 in 2007.

This Darwinian process may have helped those managers who survived. A smaller industry means there is less competition for profitable opportunities. Work by Bill Fung and Narayan Naik of the London Business School shows that one of the best periods for hedge-fund outperformance occurred in the aftermath of the collapse of Long-Term Capital Management in 1998. Then, as recently, market prices moved erratically, creating anomalies to exploit.

Taking advantage of those anomalies proved difficult at the height of the credit crunch. Hedge-fund managers needed to hold cash to meet redemptions. In addition, prime brokers (the main providers of finance to the sector) were restricting the amount that managers could borrow. Now JPMorgan, a leading prime broker, is saying that managers are willing and able to borrow again. Not on the scale seen in 2006, admittedly, but enough to take advantage of rising markets.

Even though returns are recovering, the industry is in a much weakened position. Clients are now suspicious of the fees that hedge funds could command in their glory days. A memo from CalPERS, a huge Californian pension fund, said it would “no longer partner with managers whose fee structures result in a clear misalignment of interest between managers and investors.” In practice, that means phasing performance fees over longer periods and demanding that such fees are only generated when the manager exceeds a hurdle rate of return (not zero, as was often the case).

In addition, many investors are now demanding that hedge funds run assets in “managed accounts”, where their money is held separately and the holdings are transparent. In the boom years, hedge-fund managers could afford to refuse such requests, which they tended to regard as too much hassle.

A further advantage of managed accounts, from the investors’ point of view, is that it is easy for them to withdraw their money. Many investors are smarting from their experiences in 2008, when hedge-fund managers abruptly imposed “gates” to restrict withdrawals. Those funds that did resort to gates are still being punished by investors this year. Figures from HFR show that investors withdrew around $104 billion in the first quarter of the year, which was more than 7% of the industry’s total assets.

The bit of the industry that is suffering most is the funds-of-funds sector. It claims, for an additional fee, to be able to put together a portfolio of the best hedge-fund managers. But this claim was rather dented by the exposure of several leading groups to Bernie Madoff. Funds-of-funds are struggling in 2009 as well: their returns are lagging five percentage points behind the average for the industry.

Funds-of-funds are especially vulnerable to an investor squeeze. The investors who have proved most disillusioned with the hedge-fund industry have been high-net-worth individuals, who believed all the talk about “absolute returns” and were dismayed by last year’s double-digit losses. That means the industry will become more focused on institutional investors like pension funds and endowments.

But these investors can develop their own expertise in picking the best funds or may opt for model-based “clones” that aim to produce hedge-fund-like returns at lower cost.

To add to the industry’s problems, it faces renewed interest from regulators. Managers are particularly exercised by a draft European directive which will impose limits on leverage and greater requirements for transparency, which could limit returns. Among other things, the new rules also require prime brokers to be resident in the same jurisdiction as their clients, a mindless piece of bureaucracy. From being masters of the universe two years ago, hedge-fund managers now fear becoming servants of Brussels.

Hedge fund outflows of $116 billion in the first quarter of 2009 were the second highest since 1994, Lipper data show, yet hedgies may yet receive a boost from some pension funds before the end of the year. Aureliano Gentilini, Lipper’s global head of hedge fund research, said on Tuesday he expected hedge fund outflows to taper off in the second quarter and that inflows could return in the third as investor confidence returns.

Gentilini also said that, in spite of having their worst ever year in 2008, hedge funds were seeing renewed interest from larger institutions as the dust from the financial crisis settles. Lipper is a Thomson Reuters research firm.

This is one consequence of the funding gaps now weighing on pension funds as a result of poor equities performance during the financial crisis and low bond yields, Gentilini said.

He referred to recent data from Standard & Poor’s on the current state of U.S. pensions, which showed defined benefit (DB) pension plans at S&P 500 companies will be underfunded by some $312 billion at the end of 2009.

In many cases companies have now replaced defined benefit with defined contribution plans, which put future funding risk on the contributor rather than the plan sponsor, but legacy DB plan liabilities still have to be met.

“In spite of the tough period for hedge funds, their reasonably positive performance in terms of risk to return profile is winning round some institutions,” Gentilini said.

My advice to large pension funds is to stick with more liquid hedge fund strategies where managed accounts make sense (flip side of transparency is liquidity), develop your own internal expertise in selecting managers and try to agree on more reasonable terms with managers. Importantly, make sure you are paying and getting real alpha, not disguised beta.
[Hint: Do not be afraid to seed new managers. I know this sounds crazy and will drive your board of directors crazy, but I am telling you, if you do it right, sticking to liquid strategies and using excellent managed accounts to control risks, you can build solid long-term relationships. There is plenty of talent out there that can deliver alpha in all asset classes. In Montreal and Toronto, I can pool together at least five very experienced portfolio managers that have solid track records and start a multi-strategy hedge fund.]

While consolidation is inevitable in the hedge fund industry, some of the better multi-strategy hedge funds like Canyon, Citadel and Jabre rebounded strongly in 2009, riding convertible bonds up and investing in energy and banks.

Then there is Brevan Howard Asset Management LLP, Europe’s largest hedge-fund manager, which spun off groups of credit and currency traders to manage two new funds.

Finally, the WSJ reports that Renaissance Technologies founder James Simons this year took steps to retire from his famed hedge-fund firm but has put the plans on hold for now:

The firm won’t discuss the reasons behind his moves. But Mr. Simons appears increasingly willing to part with at least some control of his hedge-fund firm, one of Wall Street’s most famous, successful and secretive.

The 71-year-old executive has traveled to China to talk with officials of the China Investment Corp., the $200 billion sovereign-wealth fund, about selling a multibillion-dollar stake in Renaissance, people with knowledge of the matter …

Simons thinking of selling a stake of his fund to China Investment Corp. is an indication of where things are heading. Remember when Blackstone did the same at the top of the PE market?

If you ask me, some hedge funds have a lot more mojo than you’d think by reading the cover pages of financial journals, but I doubt this will last long. The hedge bubble has been deflated and along with it, so have many egos.