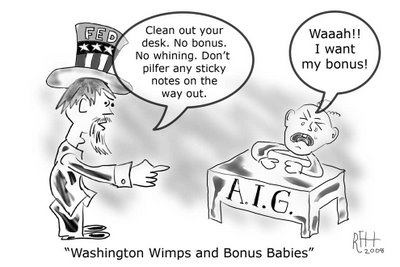 Canadian Finance Minister Jim Flaherty said he has asked all government-owned companies, including the Canada Pension Plan Investment Board, to review compensation practices:

Mr. Flaherty said leaders of the Group of Twenty countries agreed in April with principles on executive compensation set out by the Financial Stability Forum. “I’ve set out the three principles to all of them, including the CPPIB, and asked them to confirm to me that they’re in compliance with those principles,” Mr. Flaherty told reporters in Ottawa.

The forum’s proposals sought to end a culture among financial institutions that promoted too much risk-taking and which has incited popular anger. The group called for paying bonuses in a mixture of cash and shares, and tying compensation to long-term profitability rather than short-term revenue.

“I’m assured by the CPPIB that they are in compliance and that their response will indicate that,” Mr. Flaherty said. “I’m sure they’ll have to demonstrate that.”

“I am confident that the CPP Investment Board’s compensation policies and framework comply with the G-20 Principles on Compensation in Financial Services,” Robert Astley, CPPIB’s chair, said in an e-mailed statement. “I will consult with the CPPIB Board of Directors regarding this request and reply as expeditiously as possible.”

I looked for information on the G-20 Principles on Compensation in Financial Services and found this on compensation:

The declaration also states that national regulators should be required to assess firms’ compensation policies as part of their overall assessment of soundness. Where necessary, regulators are instructed to intervene with responses that can include increased capital requirements.

CPPIB does not disclose comprehensive and timely information on the benchmarks they use in private markets – an important source of the ‘added-value’ they claim to be delivering.

The large public pension plans will sing you a song about how they manage the big bucks and have to compete with the private sector to attract and retain competent managers, but the truth is that their arguments are flimsy at best.

[Note: And unlike CPPIB and PSPIB, these established Crown corporations are not exempt from the accountability framework of the Financial Administration Act. ]

Somewhere along the way, these two Crown corporations were able to convince their board of directors that they merit their compensation packages, but I think we need to take a step back and seriously review and reform the compensation structure at Canadian public pension funds.

Before I lay down my arguments below, let’s look at what is happening on Wall Street where the rationale for big bonuses is a “paper tiger”:

With big banks raising billions by the boatload, compensation on the rise again and the industry pushing back against new regulation, Wall Street seems to have found its stride again after its near-death experience last year.

The industry is enjoying a “second act” and, notably, is making money again the old-fashioned way – without taking on extreme risk, says Kate Kelly, a Wall Street Journal reporter and author of Street Fighters: The Last 72 Hours of Bear Stearns.

But Wall Street “isn’t out of the woods,” and even stronger players like JPMorgan are dealing with issues such as rising credit card defaults, Kelly says.

Furthermore, the idea that firms must give top employees extraordinary compensation or they’ll face a mass exodus of talent is a “paper tiger,” Kelly says.

To be sure, some individuals like Goldman’s Byron Trott have left to start their own firms or for academia, but Kelly says the idea legions of Wall Street-types are about to jump ship – or even want to – is a “myth” and “hot air.”

And the idea that Canadian public pension funds must give top employees extraordinary compensation or they’ll face a mass exodus of talent is another paper tiger.

These senior managers have the best gig in town: all upside, no downside. They have no skin in the game, no hurdle rate, no high-water mark, and are compensated millions of dollars based on a four year rolling return and if they get fired for not performing, they get golden parachutes.

Why would they ever leave their cushy jobs? Well, I can think of one former senior pension fund manager who invested billions in a real estate fund which he subsequently joined after he collected his big bonus based on a bogus benchmark (talk about a governance scandal!).

And the board of directors at these large public pension funds are completely incompetent as far as compensation is concerned. They are paying pension fund managers for maximizing returns, not minimizing downside risks.

In the investment world, any fool knows that in order to make money, you need to take risks. That is why you try to evaluate investment managers objectively, comparing their risk-adjusted returns.

This sounds like an easy concept to grasp, but you’d be surprised at how dumb people are at some of these pension funds. I remember a few internal portfolio managers at the Caisse were considered “investment gods” because they made $200, $300 or more profit in a year.

Of course, they were no gods. They cranked up the risk and their bets paid off one year. They never repeated their stellar performance and even lost huge sums in subsequent years, but if you saw how impressed people were on the inside, you’d be shaking your head in disbelief.

I remember one hedge fund manager came to meet me one day. He was basically selling options, collecting premiums, and he tried to fool me into thinking he had great risk-adjusted returns. He collected premiums, making his returns look stable, but you know that he can get wiped out in a bad year like 2008, erasing all his previous gains.

Now, replace selling options with investing in private markets like real estate, private equity and infrastructure. I know it’s not exactly the same, but for years, pension funds were collecting income, valuations were based on stale pricing and there was an illusion of stability. Then along comes a disastrous credit crisis and lo and behold, these private markets stumble.

So how should senior managers at public pension funds be compensated? I think they should have decent salaries but the bulk of their bonuses should be held in escrow and based over a ten year period and subject to clawbacks if they suffer a disastrous year.

No matter what Mr. Astley and other board members say, the current compensation is totally out of whack, especially after CPPIB’s dismal fiscal 2009 performance. Moreover, Diane Urquhart sent me the following points:

In addition to the CPP rolling four year return of 1.4% being less than the nominal return requirement of 6.0% set out by the Chief Actuary of Canada for CPP sustainability over 75 years, there is the following point made by Toby Sanger, Economist for CUPE. In the last ten years, the CPP Fund would have made $ 13 billion more than it did if it had been invested in government bonds, rather than a diversified portfolio of equities, real estate and bonds. So why are the CPP investment managers being paid millions of dollars of bonuses based on any of the time periods, one year, rolling four years or ten years. They have not been producing value added returns above risk free bonds and in the past four years they have not achieved the returns required for long term sustainability of the CPP.

The Tortoise and the Hare

The recently published annual report of the CPPIB shows that they have had very good rates of return in some years: 17.6% in 2004 and 15.5% in 2006. It also boasts that it has earned $23.8 billion in investment income over ten years, even after last year’s losses. But don’t expect them to tell us what we could have earned if these savings had been left in long-term government of Canada bonds over these years.

Out of interest, I calculated what these returns would have been if the initial investment had been left in government bonds and if these funds and all the further net transfers to the CPPIB had been reinvested in long-term government of Canada bonds at their yield for each year since 1999.

These calculations show that leaving these investments in long-term bonds would have earned about $36.5 billion over the past decade: $13 billion more (and 50% higher) than the CPP Investment Board earned.

Finally, consider that CPPIB did not even make Benefits Canada’s list of the top 30 Canadian pension plans. Two other federal Crown corporations made the list, most likely because they allocated more to fixed income assets and had a more conservative asset allocation.

[Note: OMERS made the list but they took a drubbing in private equity.]

In the end, you’ll hear a lot of whining and bitching about bonuses, but pay no attention to this nonsense. If you scrutinize the results, you’ll see they do not merit these bonuses.

And if they threaten to leave, show them the door.