Plants ‘can recognise themselves’ BBC

More on bank lending data Econbrowser, and More on the fall in private borrowing and the rise in the fiscal deficit Brad Setser. We mentioned this issue in a post yesterday.

Visa sees credit card industry restructuring Reuters. So what am I missing here? In the 1980s, everyone paid an annual fee and the cards had high but less exorbitant interest charges and far fewer “gotcha” fees. So charge fees again. This isn’t rocket science. It might take some price fixing, um, signaling to get there, but if airlines can figure this out, I am sure banks can too.

Arthur Levitt Hired by Goldman Sachs Jesse. “Hired” = “Bought”. Levitt was up for some regulatory posts, and when he was the head of the SEC, exhibited a bit of backbone, enough so that he got perilously few board seats when he stepped down.

Fiscal options for the UK: sovereign insolvency, inflation or serious fiscal pain Willem Buiter, And he thinks the US is in more of a bind, details for a later post….

A bar-headed goose walks with one of her day-old chicks at the Servion Zoo near Lausanne, Switzerland: 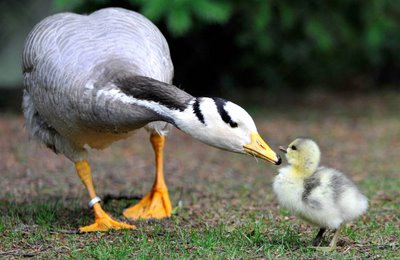