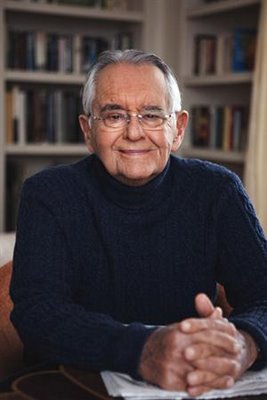 I was going to write about the markets, but it’s Father’s Day so I want to share something with you my dad gave me, a Newsweek article by Peter Peterson, Why I’m Giving Away $1 Billion:

In 2007 the company I cofounded, the Blackstone Group, held a most successful public offering. I found myself, at 81, an instant billionaire. I wish I could’ve called my father, a Greek immigrant who had spent most of his life running a 24-hour diner in Kearney, Neb. The news might have pleased him as much as my being the first Greek cabinet officer, which he never hesitated to tell perfect strangers. In the 1930s, when I was growing up, there was all this talk about millionaires like John D. Rockefeller and Andrew Carnegie. Now I was a millionaire 1,000 times over.

But immediately I began wondering: what do I do with $1 billion? The idea of trying to make the money grow felt empty to me. For my father, who saved or gave away so much of his modest income, the ultimate pejorative was “big spender.” So buying a yacht was out of the question. I was also struggling over what to do with myself. I would be retiring from Blackstone, but my mind was still sharp and my energy was good.

As my work commitments diminished, the phones gradually stopped ringing. The e-mails slowed. My schedule had too many blank spots. I was liberated. I was free. But I was joyless. I found my new life to be a kind of metaphor for my declining years—one might say a slow dying. I missed the frequent interactions with people I respected and enjoyed. I missed being needed. So I started looking at the lives of other billionaires. Almost all the ones I most admired were major philanthropists: Warren Buffett, Bill Gates, Mike Bloomberg, George Soros, Eli Broad—each with a passion to do good, each getting so much pleasure from giving their money away. I decided that’s what I wanted to do. But to which worthy cause would I direct my money?

For the first time in my memory, the majority of the American people join me in believing that, on our current course, our children will not do as well as we have. For years, I have been saying that the American government, and America itself, has to change its spending and borrowing policies: the tens of trillions of dollars in unfunded entitlements and promises, the dangerous dependence on foreign capital, our pitiful level of savings, the metastasizing health-care costs, our energy gluttony. These structural deficits are unsustainable. Herb Stein, who served alongside me in the Nixon White House as chairman of the Council of Economic Advisers, once drily observed, “If your horse dies, I suggest you dismount.” And yet, we keep trying to ride this horse.

Underlying these challenges is our broken political system. Our representatives, unlike our Founding Fathers, see politics as a career. As a result, they are focused not on the next generation, but on the next election. When the long-term problems are large and real, they anesthetize us, mislead us, divert us—anything to keep us from giving up something or having to pay for it. Too often, our political leaders are just enablers, co-conspirators in a disingenuous and greedy silence. Our children are unrepresented. The future is unrepresented. The moment is long overdue for us to become moral and worthy ancestors. So I decided to set up a different kind of foundation, one that would focus on America’s key fiscal-sustainability challenges. The fact is, for most of these challenges, there are workable solutions. Our problem is not a lack of such options. It is a lack of will to do something about them.

Ultimately, I decided to commit $1 billion to the Peter G. Peterson foundation—the vast majority of my net proceeds from Blackstone. Why so much? Kurt Vonnegut once told a story about seeing Joseph Heller at a wealthy hedge-fund manager’s party at a beach house in the Hamptons. Casting his eye around the luxurious setting, Vonnegut said, “Joe, doesn’t it bother you that this guy makes more in a day than you ever made from Catch-22?” “No, not really,” Heller said. “I have something that he doesn’t have: I know the meaning of enough.” I have far more than enough.

Peterson’s memoir, The Education Of An American Dreamer, will be published by Twelve this month.

Having met many hedge fund and private equity fund managers, I can tell you Joseph Heller is absolutely right, you can’t put a price on the “meaning of enough” and most of these super rich individuals do not have a clue about the real meaning of life.

I never met Pete Peterson but I have an autographed copy of his previous book, Running on Empty, which a senior private equity officer at a large public pension fund was kind enough to give me.

[Note: Watch this interview with Charlie Rose to hear more about Mr. Peterson.]

Finally, let me share with you this amazing YouTube video below of the real story of a inspirational love between a father and a son. Dick and Rick Hoyt – Team Hoyt – teach us that that there is never enough love for those we truly care about.

Happy Father’s Day to all fathers and to my father whom I love deeply for all that he has done for me.