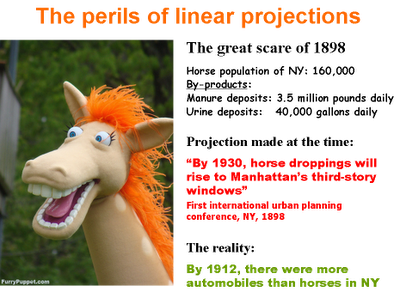 This past Thursday evening I attended the annual forecast dinner of the Montreal CFA Society. I typically avoid these events but I enjoyed meeting some former colleagues and spending time with my new co-workers.

The event was moderated by Jean-Luc Landry, President of Landry Morin, and the panelists were:

The best panelists were Stéfane Marion and Jonathan Passmore, with Norman Raschkowan a close third. Mr. Brown was unwilling to forecast anything which defied the purpose of the evening.

The first question covered what caused the financial crisis. Stéfane, who I used to work with and hold in high esteem, answered “fat tails”, meaning that in 2008 you had ten standard deviation moves that risk models were not able to capture.

Mr. Raschkowan blamed the repeal of the Glass-Steagall Act and Alan Greenspan for keeping rates so low for so long.

In the forecasting section, the panelists were cautiously optimistic on stocks and commodities but much less so on bonds and commercial real estate.

[Note: None of the panelists picked bonds as the asset class that will outperform over the next five years. This might turn out to be the biggest surprise of all.]

On inflation-deflation, Mr. Passmore spoke of the great unwinding and said there are competing forces between higher savings and the flood of liquidity. Others pointed out to the limits of inflating away debt and Stéfane mentioned that politicians and central bankers will play a key role in how this recovery takes shape. If central bankers take away the liquidity too fast, there will be trouble ahead.

[Note: No mention of the global pension crisis and how this is very deflationary.]

On the demise of the U.S. dollar, Mr. Passmore made reference to how the BRIC economies (Brazil, Russia, India and China) are already moving into a wider use of Special Drawing Rights (SDRs) allocated by the International Monetary Fund (IMF).

None of the panelists thought that the USD was going to crash. Stéfane mentioned that currencies are relative calls. He thinks the Euro is hurting an already weak Euzone which having their own crisis right now in Eastern Europe.

At one point, Mr. Landry asked Stéfane of what he thought of Jeff Rubin thesis that peak oil will shrink Asian trade:

A well-known economist and author says the B.C. government is looking in the “rear-view mirror” by spending vast sums of money to become a gateway for more trade with Asia.

In an interview in a downtown Vancouver food court, Jeff Rubin, a former chief economist with CIBC World Markets, told the Georgia Straight that in the coming years, “triple-digit” oil prices will make it far more expensive to ship goods here from Asia.

“Trade is going to become more and more regional than transoceanic,” he predicted.

Rubin’s new book, Why Your World Is About to Get a Whole Lot Smaller: Oil and the End of Globalization (Random House Canada, $29.95), describes in detail the impact of oil prices on shipping costs. For example, he notes, when oil prices rose from US$30 per barrel to US$100 per barrel, the average daily fuel bill of a cargo ship went from US$9,500 to US$32,000.

“As oil climbed to [US]$100 per barrel, fuel costs became almost half the total cost of shipping something by sea,” Rubin writes.

Rubin said he became interested in the theory of peak oil several years ago when he met petroleum geologist Colin Campbell, who cowrote a landmark article on oil supplies in Scientific American in 1998. Campbell suggested that major oil producers such as Iran, Saudi Arabia, Iraq, and the United Arab Emirates inflated their “proven reserves” even though they hadn’t made any significant new discoveries.

Campbell also predicted that oil prices would rise sharply in the early part of the 21st century because demand would outstrip supply. “He had a huge influence on me,” Rubin said. “The traditional way of looking at this from an economist’s standpoint is every scarcity is self-correcting because higher energy prices will bring forth new supplies.” He noted, however, that this isn’t the case if the supply doesn’t exist.

Rubin’s book chronicles depletion of global oil reserves at the same time as demand has increased sharply in oil-producing countries. He notes that Russia has helped fill a growing gap in supply in recent years but claims that its production has peaked.

“If we can’t grow world production above 86 million barrels a day, we may not be able to grow world GDP [gross domestic product],” Rubin said. “The single most important thing to prevent peak oil from becoming peak GDP is to go back to local economies.”

That’s because producing goods locally will reduce shipping costs. But the B.C. government’s Gateway Program is based on the belief that trade with Asia will continue to expand. It includes a new Port Mann Bridge, widening Highway 1 from Vancouver to Langley, a new four-lane South Fraser Perimeter Road, and the North Fraser Perimeter Road project.

According to a Metro Vancouver report, the B.C. Ministry of Transportation and Infrastructure has secured 110 hectares of agricultural land for the South Fraser Perimeter Road and the Golden Ears Bridge projects.

Rubin, however, said that there will be greater demand for farmland because soaring fuel costs will make food from China far more expensive. “Don’t expect the politicians to get it before you get it,” he said. “Triple-digit oil prices will be a wake-up call to people who are otherwise deaf.”

To answer this question, Stéfane brought out that slide above on the perils of linear projections (click to enlarge). He was saying how back in 1898, they had predicted that horse droppings would rise to Manhattan’s third story windows.

Of course, that never happened. By 1912, there were more automobiles than horses in New York.

Stéfane’s point was that it is dangerous to forecast things based on linear projections. As the global population grows, so will our energy demands, but it is possible that alternative forms of energy will (hopefully) displace previous ones.

Consider this article written back in October in AmericanSolarEconomy blog:

This is assuming that the Market survives. I’m sorry that I have to preface this way.

This is a rare chance for “the little guy” to buy in BEFORE “the big guy.” We KNOW how big the totality of the various alternative Energies are striving for, and it’s as big or bigger than the totality of today’s Coal and Oil Industries. That’s freakin’ big.

So, today’s big money, that is invested in yesterday’s technology, is looking at a situation where they are simply unable to take part in the presently tiny alt-Energy industry with any significant portion of their vast wealth, without creating an incredible bubble.

On the other hand, they are also looking at a situation where that tiny industry is going to replace them, unless they own it, and they simply cannot let that happen.

Therefore, they will have to buy in at some point, bubble or not, and the advantage goes to the little guy, as he can put a huge portion of his total wealth into this industry without moving the dial at all. The little guy can wait till the big guy comes looking for shares in final desperation for ownership of future productive capacity.

Now, this is always the game, right? Everybody is trying to get in before everybody else. The trick is to be right about where the big guy is going, beforehand. Why am I so confident? Because we’re talking about Energy.

There is no Economy without Energy. That’s a basic physical fact, and not even the most powerful equations of Economists can supersede it. The Economic Powerhouse that gives value to the present set of World Currencies, demands an incredible amount of Energy.

Therefore, since the Rich and Powerful benefit neither from the collapse of the economic system as a whole, nor from the inevitable replacement of the Fossil-based Industries that they currently own, the conclusion of greatest likelihood is that those Rich and Powerful will at some point move to own the future industries. When the move is made, there will be competition between the wealthy, and associated rapidly inflating prices.

I am not able to perfectly forecast the future, but I see a world of opportunity in the solar sector. And I do believe this will be the next bubble, with lots of volatility along the way.

Finally, Jonathan Nitzan and Shimshon Bichler have just published “Contours of Crisis III: Systemic Fear and Forward-Looking Finance”. You can click here to read their text in HTML or click here for a PDF version.

Here is something to peak your curiosity:

The current paper takes on the notion of the forward-looking investor. According to the conventional creed, investors are forever looking into the future: they discount not profits that have already been earned, but those that they expect to earn. This forward-looking premise lies at the heart of modern finance, and investors usually follow its rituals with religious zeal.

Occasionally, capitalism is struck by a systemic crisis, a period in which the very existence of the system is put into question. And when that happens, all bets are off. Capitalists lose sight of the future, and forward-looking finance suddenly collapses.

Read this paper and keep in mind horse droppings in 1898 and the perils of linear projections.

One professor of economics wrote back to me the following comment:

Anyone with a Greek background will appreciate how long people have been earning money by selling their vision of the future, without anyone, ever, evolving a methodology for doing anything better than projecting the past. When there are elements not foreseen , the Ancients spoke of the anger of the gods, alumni of the Econometrics class speak of fat tails. What is amazing, but explicable, is that the market for visions of the future continues to prosper.

I wholeheartedly agree which is why I take all Cassandras, and my own projections, with a grain of salt.