Some controversy was triggered over a line of questioning this morning during Ben Bernanke’s testimony before Congress, as reported on some of the top financial blog sites Zerohedge and Naked Capitalism. We read them both daily and are often envious of the depth and breadth of their expertise.

Congressman Grayson’s line of questioning implied that the Fed was providing loans to foreign companies. Others wondered if the Fed was engaged in propping up the dollar by forcing central banks to buy US dollars in these swaps.

During the current credit crisis the Fed first reacted to market conditions and requests from central banks starting in September 2008 by expanding its currency swap lines with the European Central Bank and the Swiss National Bank, and creating new swaps with the Bank of Japan, Bank of England and the Bank of Canada for $180 billion.

What Is a Currency Swap?

A currency swap is a transaction where two parties exchange an agreed amount of two currencies while at the same time agreeing to unwind the currency exchange at a future date.

The currency swap is executed at a given exchange rate, generally the market rate, in order to provide liquidity in a specific currency to a specific banking jurisdiction. Here is an example of a swap that was conducted with the BOE at the rate of 1.8173.

The reason for the swap is to provide the BOE with additional US dollars to meet the short term needs of its client banks, and the dollar demands of their customers. 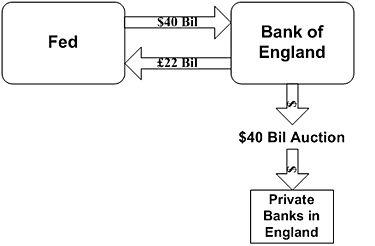 At the time in September private banks were reluctant to lend to one another or engage in private swaps because of a prevailing fear in the market of potential bank insolvencies and the counter party risk which that entails.

At the same time there was a ‘run’ on dollar assets in Europe as customer sought to liquidate their investments denominated in US dollars but held by foreign banks. Some of these ironically enough were collateralized debt obligations that had been sold to the foreign banks and their customer by Wall Street. TED Spread Soars to New Record – Symptom of the Eurodollar Squeeze? 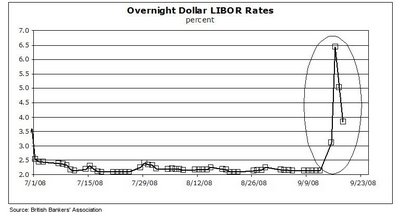 Did Wall Street set up their foreign counterparts, and then squeeze them mercilessly when they needed dollar assets? Probably giving the Street too much credit for planning. It is more likely a case of simple misrepresentation, followed by fear when the misrepresentation had been discovered.

The Ted Spread is the difference between the US Dollar LIBOR and the 3 Month US T Bill. It intends to measure the difference in ‘price’ between dollars in the US and dollars overseas. Nine out of ten people might notice a sharp spike in this spread as the credit crisis hit full fury in September 2008. Demystifying the TED Spread 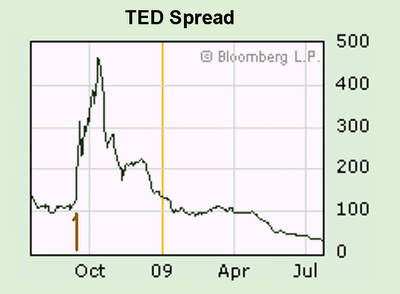 As one can easily see, the TED Spread began to decline after the Fed and the Central Banks began to provide dollar liquidity where it was required.

There is concern amongst some that the Fed was engaging in these currency swaps to prop the dollar, as expressed in the US Dollar Index (Dx). There was no need to do these swaps to support the dollar, as the US dollar was already enjoying a strengthening as the ‘flight to safety’ currency. The original September tranche created by the Fed grew to 500 billion dollar swaps line as the Central Banks sought to prevent a currency crisis, an artificial dollar shortage in what amounted to a run on foreign banks for dollar holdings, as the credit crunch hit with its full fury. 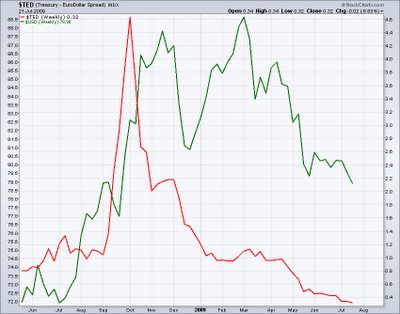 The DX index is a somewhat imperfect gauge of the dollar value as it is heavily weighted to the Euro and Yen, and has a no exposure to some of the most important developing industrial powers.

More importantly, here is the Euro – Dollar Exchange Rate. Again, the ‘jitters’ over the state of the European Banking System were causing a steep decline early on and a flight to safety in the US Dollar. The Dollar Rally and the Deflationary Imbalances in the US Dollar Holdings of Overseas Banks 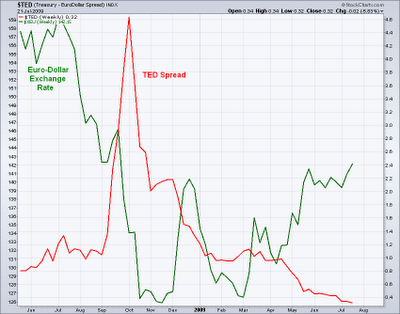 Finally, Ben Bernanke is no Alan Greenspan in that his deportment in front of Congress is rarely calm, but I did not find any particular ‘tells’ in his responses to Mr. Grayson beyond his usual skittishness and unease in the public spotlight.

Quite frankly, my initial take was that Ben was incredulous that the Congressman was asking such naive questions, particularly when the congressman started asking about the source of the Fed’s authority to conduct foreign exchange operations.

Personally I wondered if it was a ‘red herring’ served up by a friendly Democrat. There are much more penetrating questions to be asked of Mr. Bernanke and his Fed, and these are not among them.

The concern about the swaps seemed a bit misplaced and confused. But the obvious opacity of the Fed and its operations does underscore the political naivete in promoting the Federal Reserve as the uber regulator of the system. One wonders who is so politically tone deaf on the President’s economic staff? Or is Larry Summers really that arrogant to think that he can be the next Fed chief and chairman of the SEC all rolled into one? Considering Larry’s past performances, the answer may very well be yes.

Postscript: The emails show that there are those who observe, somewhat correctly, that if the Fed had done nothing to alleviate the eurodollar short squeeze then the dollar would have most likely appreciated in value, perhaps moreso than it had done, for a brief but happy moment for the dollar bulls.

The proponents of this solution do overlook the problem that the private markets for overnight loans had utterly seized, and to not provide central bank liquidity in this situation would have most likely have caused a cascade of significant failures, and a backlash from the rest of the world that would have been equally impressive.

There is the issue, raised rather stridently by some of the central banks, that it was the US financial institutions and ratings agencies that had caused the problem in the first place by selling large amounts of fraudulently rated assets to trusting private bankers around the world. You know, those funny foreign folks who the US, as a net debtor with debt load growing mightily, is going to continue to ask to buy its debt and financial instruments now and for the forseeable future, and continue to support the dollar as a reserve currency.

It reminds me of a story an old boss of mine told me about his philosophy of business. He said, “I’m Irish, and the way the Irish compete is to say, Let’s race, and then punch the other guy in the face, and start running. What do you think of that?”

My answer was, “I’m part Italian, and my advice is if you do that to an Italian, don’t stop running at the finish line.”

And so it goes.