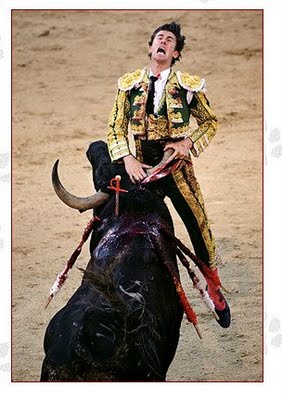 Bloomberg reports that U.S. stocks rose for a fourth week, pushing the Standard & Poor’s 500 Index above 1,000 for the first time since November, as better-than-estimated employment, manufacturing and home sales data boosted confidence that the worst slump since the Great Depression is ending:

Bank of America Corp. and Wells Fargo & Co. rallied more than 11 percent following an unexpected profit at HSBC Holdings Plc, Europe’s biggest bank, and a report from the National Association of Realtors showing contracts to buy existing homes increased for a fifth month. American International Group Inc., the insurer rescued by the U.S. government, more than doubled on its first profit in seven quarters.

“If you step back and look at fundamentals, you have to say that things are lining up in quite a positive way for the next several months,” said Linda Duessel, who helps oversee $402 billion as equity market strategist at Federated Investors Inc. in Pittsburgh.

The S&P 500 has jumped 49 percent from a 12-year low on March 9, the steepest surge over the same number of days since the Great Depression, as three quarters of its companies posted second-quarter earnings that beat estimates and the economy improved. Wal-Mart Stores Inc. and Macy’s Inc. are scheduled to report results next week.

So what is fueling this steep surge in stock indexes? There is no doubt that heading into year-end, big funds are experiencing serious performance anxiety. As indexes grind higher, portfolio managers who were short or neutral stocks are forced to chase returns.

But how much more steam does this rally have? On Thursday, Goldman Sachs’ Abby Cohen (yup, the Queen of Bulls!) came out to say that new bull market in U.S. stocks has begun and possibly started in March:

“We do think the new bull market has begun,” she said. “It may prove it began in March of this year.”

Cohen sees the Standard & Poor’s 500 index .SPX at between 1,050 and 1,100 toward the end of this year. She also said it appears job losses are slowing but that she sees many more months of “difficult labor situation ahead.”

It is hard to argue against the bulls. Many of the financial stocks are up huge since March and the latest U.S. manufacturing and employment reports suggest the worst is behind us.

When I wrote my outlook 2009 back in January, I was bearish on financials. My biggest mistake was not to see that the banksters on Wall Street manufactured this crisis and benefitted from government assistance and printed money on the spreads. Moreover, instead of lending money to businesses, banks are making huge profits on their trading books.

But I didn’t really care because I made good money on my solar stock positions as I knew things were getting way overdone on the downside. These are trading markets and will likely remain trading markets for a long time. Read my piece on the investment labyrinth and why in these markets, small is beautiful.

[Note: Eric Roseman is right, on a risk-adjusted basis, convertible bonds lead the way in 2009.]

My brother was telling me today how regulators are going to crack down on high frequency “flash'” trading. Great news but I would like to see them crack down on naked short selling too.

I any case, you might see more short squeezes in August and some wild moves in stocks. Just check out AIG’s move last week where it opened at $13.20 and closed the week at $27.14, more than doubling in a single week (click to enlarge):

The thing that strikes me is the volume surged in both the stock and call options before the release of earnings on Friday. There is no way that somebody did not leak out the numbers beforehand and yet nobody investigates these all too common occurences.

So how much more upside do we have after a nearly 50% move from the bottom? Technicians will tell you that you can go up to 60% or 70% from the bottom, which means we still have more room to run. But legendary investor, Paul Tudor Jones, thinks this is just another bear market rally:

Slowing growth in China and the return of front-page stories on swine flu may be “further catalysts for global equity markets to pause in September,” the Greenwich, Connecticut-based firm said in an Aug. 3 client letter, a copy of which was obtained by Bloomberg News.

Tudor said the 47 percent gain in the Standard & Poor’s 500 Index of the largest U.S. companies since March 9, when it fell to a 12-year low, is a “bear-market rally.” The index topped 1,000 for the first time in nine months this week after companies reported better-than-expected profits.

“Impressive counter-trend rallies are a feature, not an oddity, of secular bear markets,” Tudor said. “We are not inclined to aggressively chase the market here. Many doubts remain about the sustainability of this recovery, most prominently the weakness of household income growth.”

The firm said that a year-end gain in stocks may be another bear market rally with equities falling in 2010.

I agree with Mr. Jones but I also warn you that this counter-trend rally has legs so focus on high beta plays like the Nasdaq Powershares (QQQQ), the Semiconductor Holders index (SMH) and Chinese solar stocks like LDK Solar (LDK) and Yingli Green (YGE).

[Note: Some other Chinese solar stocks that have already broken out and continue to head higher are Trina Solar (TSL), Suntech Power Holdings (STP) and Canadian Solar (CSIQ).]

When the markets do pull back, keep an eye on the Ultrashort Real Estate Proshares (SRS) and the Ultrashort Financials (SKF). But I warn you these leveraged ETFs are not for retail investors and there are lawsuits filed against Proshares because they do not always behave accordingly.

Finally, I urge you all to read the Sceptical Market Observer’s Good and Bad News on the Economy and especially Hoisington Investment Management’s second quarter outlook, from which I quote the conclusion:

The combination of an extremely overleveraged economy, ineffectual monetary policy and misdirected fiscal policy initiatives suggests that the U.S. economy faces a long difficult struggle. While depleted inventories and the buildup of pent-up demand may produce intermittent spurts of growth, these brief episodes are not likely to be sustained. In several years, real GDP may be no higher than its current levels. However, since the population will continue to grow, per capita GDP will decline; thus, the standard of living will diminish as unemployment rises. These conditions will produce a deflationary environment similar to the Japanese condition.

Investments in long term Treasury securities are motivated by inflationary expectations. If fixed income investors believe inflation is headed lower, they will invest in long-dated securities, while they will invest in Treasury bills, or inflation protected securities if they believe inflation is headed higher. In the normal recessions since 1950, the low in inflation was, on average, 29 months after a complete economic recovery was underway, and bond yields moved in a similar fashion. If this recession were normal, then the low in inflation would be in late 2011, at which time investors would begin to consider shortening the maturity of their Treasury portfolios. However, because of our highly-indebted circumstances and the movement of private sector resources to the public sector, the trough in inflation will be moved out, meaning that the low in Treasury bond yields is a distant event.

So while the bulls cheer on Wall Street, I tell people to focus, not to get too excited and don’t be afraid to raise some cash as asset prices keep going up. There is a lot of liquidity out there driving prices higher, but there will be more than a few hiccups along the way as inflationary headwinds eventually give way to deflationary headwinds.