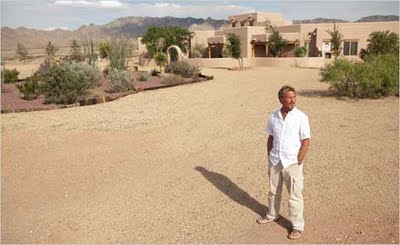 David Leonhardt and Geraldine Fabrikant of the NYT report that the Rise of the Super-Rich Hits a Sobering Wall:

The rich, as a group, are no longer getting richer. Over the last two years, they have become poorer. And many may not return to their old levels of wealth and income anytime soon.

Perhaps the broadest question is what a hit to the wealthy would mean for the middle class and the poor. The best-known data on the rich comes from an analysis of Internal Revenue Service returns by Thomas Piketty and Emmanuel Saez, two economists. Their work shows that in the late 1970s, the cutoff to qualify for the highest-earning one ten-thousandth of households was roughly $2 million, in inflation-adjusted, pretax terms. By 2007, it had jumped to $11.5 million.

The gains for the merely affluent were also big, if not quite huge. The cutoff to be in the top 1 percent doubled since the late 1970s, to roughly $400,000.

By contrast, pay at the median — which was about $50,000 in 2007 — rose less than 20 percent, Census data shows. Near the bottom of the income distribution, the increase was about 12 percent.

Some economists say they believe that the contrasting trends are unrelated. If anything, these economists say, any problems the wealthy have will trickle down…Other economists say the recent explosion of incomes at the top did hurt everyone else, by concentrating economic and political power among a relatively small group….

Mr. Saez, a professor at the University of California, Berkeley, said he believed that the rich had become poorer. Asked to speculate where the cutoff for the top one ten-thousandth of households was now, he said from $6 million to $8 million.

For the number to return to $11 million quickly, he said, would probably require a large financial bubble…..

“We are coming from an abnormal period where a tremendous amount of wealth was created largely by selling assets back and forth,” said Mohamed A. El-Erian, chief executive of Pimco, one of the country’s largest bond traders, and the former manager of Harvard’s endowment.

Some of this wealth was based on real economic gains, like those from the computer revolution. But much of it was not, Mr. El-Erian said. “You had wealth creation that could not be tied to the underlying economy,” he added, “and the benefits were very skewed: they went to the assets of the rich. It was financial engineering.”….

The possibility that the stock market will quickly recover from its collapse, as it did earlier this decade, is perhaps the biggest uncertainty about the financial condition of the wealthy. Since March, the Standard & Poor’s 500-stock index has risen 49 percent.

Yet Wall Street still has a long way to go before reaching its previous peaks. The S.& P. 500 remains 35 percent below its 2007 high. Aggregate compensation for the financial sector fell 14 percent from 2007 to 2008, according to the Securities Industry and Financial Markets Association — far less than profits or revenue fell, but a decline nonetheless…..

Beyond the stock market, government policy may have the biggest effect on top incomes. Mr. Katz, the Harvard economist, argues that without policy changes, top incomes may indeed approach their old highs in the coming years. Historically, government policy, like the New Deal, has had more lasting effects on the rich than financial busts, he said.

One looming policy issue today is what steps Congress and the administration will take to re-regulate financial markets. A second issue is taxes.

In the three decades after World War II, when the incomes of the rich grew more slowly than those of the middle class, the top marginal rate ranged from 70 to 91 percent. Mr. Piketty, one of the economists who analyzed the I.R.S. data, argues that these high rates did not affect merely post-tax income. They also helped hold down the pretax incomes of the wealthy, he says, by giving them less incentive to make many millions of dollars……

Yet there is also a reason to think that the incomes of the wealthy could potentially have a bigger impact on others than in the past: as a share of the economy, they are vastly larger than they once were.

The top 1 percent of earners took home 23.5 percent of income, up from 9 percent three decades earlier.

One issue that has perplexed economists on both sides of the political spectrum is how to deal with inequalities in wealth. I am not convinced that the rich are not getting richer, but I will concede that the deflation scenario will wipe out many fortunes.

The fact is that the poor are hurting much more than the wealthy in a downturn. The affluent should be paying more in taxes and they should count themselves lucky and remember Pete Peterson’s wise words on the meaning of enough.