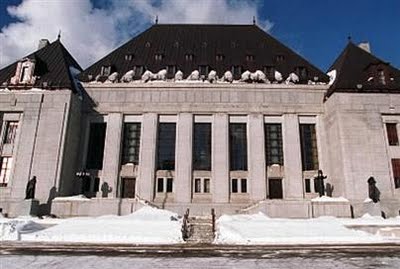 The Financial Posts reports that the Supreme Court rules on treating pension surpluses:

A Supreme Court of Canada ruling on how employers deal with surpluses in a defined-benefit pension plan has company lawyers cheering and employee lawyers jeering.

In a 5-2 ruling, Canada’s top court held that Kerry Canada Inc. did not violate a 55-year old trust document, when it used an actuarial surplus in its defined-benefit plan (DB) to fund the contributions and expenses of a defined-contribution plan (DC) it created for new employees in 2000, after closing access to its DB plan.

It’s the latest in a string of rulings on how pension surpluses should be treated and comes as more companies switch to DC from DB plans. In DB plans, employers are responsible for any funding shortfalls whereas in a DC plan employers merely provide a set contribution.

Ron Walker, a lawyer at Fasken Martineau DuMoulin in Toronto, who represented the company, said the ruling “vindicates a lot of arrangements that have been put in place. There’s a great deal more clarity for both pension lawyers and actuarial consultants out there who have been structuring plans.”

Paul Timmins, a lawyer at WatsonWyatt, called the decision “comforting” because it recognizes that “employers should be able to evolve the nature of a plan from time to time.”

Not everyone is pleased, however. Ari Kaplan, the Koskie Minsky lawyer who argued the case on behalf of the 80 employees still in Kerry’s DB plan, said it is a “green light for employers to reduce DB coverage and shift into DC coverage. In the long run, that is not a good thing for Canadian workers.”

Steve Barrett, of Sack Goldblatt Mitchell, who represented the Canadian Labour Congress in the case, said “it’s regrettable the court is saying that there’s no impediment from employers taking a surplus in a defined-benefit plan and diverting it for its own purposes to pay contributions to employees in an inferior plan.”

In 2000, Kerry closed its DB plan, shifting new employees to a DC plan. The DB plan had an actuarial surplus, which meant there was more money in it than necessary to fund pension obligations that had accrued, so Kerry took an allowable “pension contribution holiday.” It stopped paying into the DB plan and used surplus funds to pay $850,000 in plan expenses, a cost it used to cover on its own, and tapped $1.5-million to cover DC contributions.

DB plan members sued to prevent the funds from being converted. The Ontario Financial Services Tribunal backed the company’s actions, but the Ontario Divisional Court disagreed and ruled the money could not be used in that manner. The Ontario Court of Appeal overturned that ruling and the pensioners appealed to the Supreme Court.

Writing for the majority, Justice Marshall Rothstein said “the payment of plan expenses is necessary to ensure the plan’s continued integrity and existence,” and pension monies can be used to pay “reasonable and necessary” expenses, which Mr. Timmins said was an important ruling for employers.

On the issue of the surplus, Justice Louis LeBel argued in his dissent that allowing the surplus to fund the DC plan “disrupts this careful” balance between providing incentives for employers to create pension plans and the need to protect pensioners’ rights.

However, Justice Rothstein shot that down. “It is not the role of the courts to find the appropriate balance between the interests of employers and employees. That is a task for the legislature.”

Labour is already sounding the alarm over the Supreme Court pension loss:

A top labour lawyer is calling for government action to protect pensions in the wake of a Supreme Court ruling that it was OK for a company to move pension plan money.

The high court ruled Friday that Kerry Canada Inc. could transfer surplus cash from its defined-benefit pension plan to meet its obligations under a newer defined-contribution plan.

The high court also concluded that the food company can pay its pension fund’s “reasonable” administration costs from pension money.

The verdict could have implications for other companies that shift money between pension funds.

It also bolsters a call this week by Canada’s premiers for a national summit on pensions, said Steven Barrett of the Toronto-based law firm Sack Goldblatt Mitchell.

“If anything, I think it reinforces the call for government and legislative action to enhance the pension plans of workers who are facing retirement with either pension plans that have been seriously eroded over the last year or so or workers who simply have no, or inadequate, pension coverage,” said Barrett, who intervened in the case on behalf of the Canadian Labour Congress.

“(The court) in fact says it is up to legislatures and governments to develop pension plans that protect workers.”

At their meeting in Regina this week, the premiers jointly called on the federal government to hold a national gathering to find ways to assist Canadians who are facing retirement without adequate income.

Ontario Premier Dalton McGuinty cited a recent study that showed that, by 2030, two-thirds of Canadians will not have enough retirement income to pay for their necessary living expenses.

But David Vincent, a senior partner at law firm Ogilvy Renault, sees the decision as being about controlling costs and providing corporations with predictability in earnings.

The ruling confirms “the economic reality of today,” Vincent’s office said in an email to The Canadian Press.

“Defined benefit pension plans are just too unpredictable and expensive for businesses to maintain while staying competitive,” said the email.

The Kerry Canada case pitted the company against some of its current and former employees and had been closely watched by business, unions and the pension industry.

It stemmed from 1985, when Kerry began paying administrative costs for the pension plan from the pension itself, and then took a contribution holiday.

Then, in 2000, the company amended its plan, closing its defined benefit plan to new employees, and creating a defined contribution plan.

Kerry employees asked the Ontario Superintendent of Financial Services to investigate the firm after it changed the plan.

In June, 2007, the Ontario Court of Appeal ruled that an employer could stop paying pension plan expenses if there was nothing specifically in the plan to prevent it.

It also concluded that the company would not have to pay back the money it took from the fund while it took a contribution holiday.

The Supreme Court agreed, saying there was nothing in the plan preventing the company from avoiding making payments if the fund was in surplus, and nothing stopping it from transferring funds from one part of the plan to the other.

“The plan documents do not preclude combining the two components in one plan and nothing in these documents or trust law prevents the use of the actuarial surplus for the (define contribution) contribution holidays,” Justice Marshall Rothstein wrote.

The high court ruled that Kerry was not obligated to pay pension expenses out of pocket, because those expenses were incurred for the benefit of pension plan members.

“The payment of plan expenses is necessary to ensure the plan’s continued integrity and existence, and the existence of the plan is a benefit to the employees,” Rothstein wrote.

“It is therefore to the exclusive benefit of the employees that expenses for the continued existence of the plan are paid out of the fund.”

As we witness more and more companies winding down their defined-benefit plans to replace them by defined-contribution plans, I can’t help but think that we are headed towards a full-blown pension crisis very quickly. That summit on pensions can’t come soon enough.