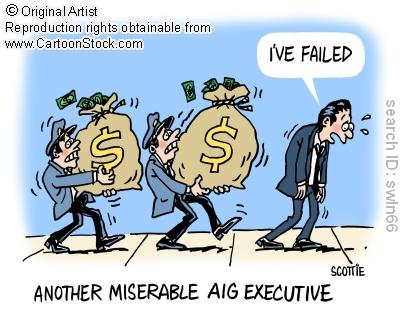 You might be reading my blog wondering where is public outrage over pensions? For example, how can PSP Investments lose billions and still pay their top officers bonuses, allowing them to get extremely well compensated in a terrible year?

And it’s not just PSP. The same is happening in many other large public Canadian pension funds, including CPPIB where top officers got millions with their bonuses after losing a whopping $24 billion in FY 2009.

So where is the outrage? I just came back from Greece where if even a fraction of this came out in the media, there would be riots in the streets. The same can be said about other European countries, especially in France.

But “civilized’ Canadians seem to be sleepwalking while their pensions are dwindling. The unions are keeping silent too. Why? Maybe because they know that the federal and provincial governments are on the hook to pay out pension benefits even if the public pension plans are severely underfunded. Why make a fuss when you know the government will come in and shore up the plan?

Of course taxpayers might want to pay closer attention to what is happening at public pension funds. Because when it comes time to foot the bill, they are going to on the hook to shore up these plans. I wonder if the Canadian Taxpayers Federation is aware of all the nonsense going around in our large Canadian public pension funds. If not, they are ignoring the most pressing public policy issue of the next few decade.

Am I exaggerating? Perhaps, but if you look at what is going on right now in California, you are getting a glimpse of what will happen across most of the developed world. In California, public pensions are drawing scrutiny amid its crisis:

California’s rapid economic decline has prompted Gov. Arnold Schwarzenegger to propose what once was unthinkable — rolling back generous pensions in a state heavily influenced by public employee unions.

The Republican governor said he’s motivated by the need to save money. California has at least $63 billion in unfunded pension liabilities, an amount equal to roughly two-thirds of all annual general fund spending.

The concern is shared across the country, as local and state governments wrestle with hundreds of billions of dollars in unfunded public employee pension and retiree health care costs.

New Jersey last year raised the minimum age to qualify for benefits from 60 to 62.

And Georgia has started a hybrid plan for new state hires that blends a defined-benefit pension — with set payments based on salaries — and a 401(k).

In California, Schwarzenegger dropped long-term pension reform from negotiations with lawmakers to close the state’s $24 billion budget deficit. He said this week that he would press for pension reform now the state has enacted revised spending plan.

“Again, everyone understands we are running out of money,” he told reporters. “We cannot continue promising people things that we cannot deliver on.”

His proposal would not change the pension system for current workers, but would lower benefits for new employees. His office said such changes would save the state some $95 billion over 30 years.

His administration has estimated that unfunded pension liabilities — money the state has promised to pay without earmarking where the funds will come from — could be as high as $300 billion if current investments fail to generate the projected returns.

But the reform proposal met with quick resistance in a state where large public employee unions contribute heavily to Democrats, the state’s majority party.

The potential for reduced retirement benefits adds to concern that California will not be able to attract qualified employees, said Christopher Voight, executive director for the California Association of Professional Scientists.

For example, he said, the state needs microbiologists to test for swine flu, but has a hard time keeping them because they tend to leave for better pay at private labs.

Schwarzenegger wants to start by undoing a retirement package passed by California lawmakers in 1999 and signed by then-Gov. Gray Davis, a Democrat.

Most state workers can retire as early as age 55. Their pension is based on 2 percent of their final salary multiplied by the number of years they worked. The payments rise with inflation.

For example, a civil servant with 30 years in state government who made $70,000 a year could take early retirement at 55 with an annual pension of $42,000. Under Schwarzenegger’s proposed reform, they couldn’t retire until age 60.

Employees in high-risk jobs — such as firefighters — can receive up to 90 percent of their salaries if they retire at age 50. Under Schwarzenegger’s plan, they couldn’t retire until age 55.

Retirees also are promised health care coverage for themselves and their families, a benefit that can cost the state $1,100 a month per retiree, according to the California Public Employees’ Retirement System. Schwarzenegger’s proposal doesn’t tackle health care.

To reformers, changing the state’s retirement system is as much a matter of fairness as one of cost.

The Center for Retirement Research at Boston College found that while 43 percent of private employers offered some type of retirement plan in 2006, they tended not to be as generous as public employee packages. Private-sector workers also rarely receive retiree health care coverage, meaning most have to work until they can start drawing Social Security and Medicare at age 65. Workers born after 1960 will not be eligible to retire until 67.

“People are upset,” said Schwarzenegger’s economic adviser, David Crane. “They don’t have a defined benefit plan and ask, ‘Why am I paying for someone else to have one?'”

Public employees do shoulder a portion of the commitment, contributing to their retirements through payroll deductions.

Ed Hass, 54, said private companies need to do more. He found a job with the Department of Corrections in 2007 in large part because of the guaranteed pension.

“You’ve heard of Enron, right?” he said. “Not only did (employees) all lose their jobs, they lost all their retirement tied to Enron’s stock.”

But the latest U.S. Census survey, from 2007, shows the average annual salary of California state government employees was $53,958, compared with $40,991 for the average private-sector worker.

“The pension benefits for public employees in California are extravagant and they are going to bankrupt cities and counties, along with the state,” said Keith Richman, a former state assemblyman who said he plans to launch an initiative campaign to change state employee pension benefits.

The case above is just another example of pensions apartheid. My father always tells me no matter how much money you make, if you spend more than you make, you’ll always be in a hole. There is a rationale for deficit spending in bad economic times, but the public will not want to pay generous pension benefits to public servants when their own RRSPs or 401Ks got clobbered and they face pension poverty.

So while unions of Canadian public civil servants keep quiet on what is going on at their public pension funds, maybe they should look at what is going on in California because as Canadian public pension fund managers collect huge compensation for delivering mediocre performances, their members’ pension benefits risk being scaled back in the future.

And if the unions keep quiet, then Canadian taxpayers should start hammering away at this issue. They are ultimately on the hook for all these public pension deficits.