Will Krakatoa rock the world again? Last time, it killed thousands and changed the weather for five years, now it could be even deadlier… Mail Online. If you need something to worry about besides Sarah Palin becoming the next Rush Limbaugh. The photos are very cool, regardless and the story is predictably less scary than the headline.

‘Nice’ Wasn’t Part of the Deal Joe Nocera New York Times. Here I thought Nocera, who is smart but a more than a tad co-opted by the financial services industry, finally got it. The piece is very good until the very end, where he punts. But that bit has a very revealing exchange. 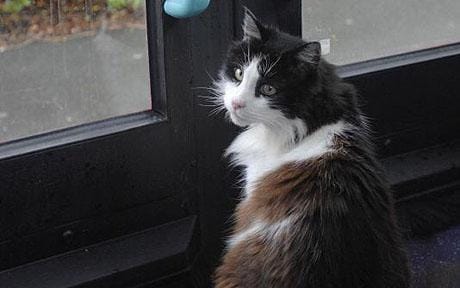 Casper, which is 12 years old, boards the No3 service at 10.55am from outside his home in Plymouth, Devon, and travels the entire 11-mile route before returning home about an hour later.

On the route, the cat passes an historic dockyard and naval base, a city centre, several suburbs and the city’s red light district.

Susan Finden, 65, a care worker who is Casper’s owner, said: “Casper has always disappeared for hours at a time but I never understood where he was going.

“I called him Casper because he had a habit of vanishing like a ghost. But then some of the drivers told me he had been catching the bus.

“I couldn’t believe it at first, but it explains a lot. He loves people and we have a bus stop right outside our house so that must be how he got started – just following everyone on.

“I used to catch the odd bus too so maybe he saw me and got curious what I was doing.

“Casper is quite quick for his age so he just hops on to the bus before the doors close. He catches the 10.55am service and likes to sit on the back seat.”

Rob Stonehouse, one of the drivers on the route, said: “He usually just curls up at the back of the bus. Sometimes he nips between people’s legs but he never causes any trouble.”

Casper has travelled an estimated 20,000 miles but Mrs Finden says because he is getting old the drivers often have to shuffle him off at the right stop.

A spokeswoman for First Bus said the firm has put a notice up in the office asking them to look after the non-paying passenger.