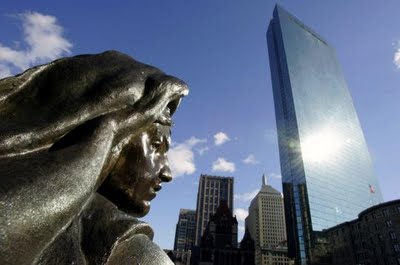 Last October, I wrote an article asking, Is Commercial Real Estate Ready To Tank? Of course, I knew the answer to that question and saw the writing on the wall a long time ago. Today, the Boston Globe published an article stating commercial real estate woes weigh on Fed:

The collapse in commercial real estate is preventing Federal Reserve chairman Ben S. Bernanke from declaring the economy and financial markets are healed.

Property values have fallen 35 percent since October 2007, according to Moody’s Investors Service.

That’s making it tough for owners to refinance almost $165 billion of mortgages for skyscrapers, shopping malls, and hotels this year, pressuring companies such as Maguire Properties Inc., the largest office landlord in downtown Los Angeles, to put buildings up for sale.

The industry is likely to be high on the agenda when Bernanke and his colleagues sit down in Washington today at the Federal Open Market Committee meeting on monetary policy. Lawmakers including Barney Frank and Carolyn Maloney are pushing the central bank to extend an aid program designed to restore the flow of credit.

If nonresidential real estate remains in the doldrums, the Fed may be forced to leave emergency-lending programs in place and keep its benchmark interest rate close to zero for longer than some investors expect, given positive signs elsewhere in the economy.

Commercial property is “certainly going to be a significant drag’’ on growth, said Dean Maki, a former Fed researcher who is now chief US economist in New York at Barclays Capital Inc., the investment banking division of London-based Barclays PLC. “The bigger risk from it would be if it causes unexpected losses to financial firms that lead to another financial crisis.’’

The Fed is “paying very close attention,’’ Bernanke, 55, told the Senate Banking Committee on July 22, the second of two days of semiannual monetary-policy testimony before the House and Senate. “As the recession’s gotten worse in the last six months or so, we’re seeing increased vacancy, declining rents, falling prices, and so, more pressure on commercial real estate.’’

The pressure may be easing in other areas of the economy. Gross domestic product shrank at a better-than-forecast 1 percent annual pace in the second quarter after a 6.4 percent drop the prior three months, and residential housing starts rose unexpectedly by 3.6 percent in June as construction of single-family dwellings jumped by the most since 2004, according to data from the Commerce Department.

Employers cut fewer workers than anticipated last month as the jobless rate fell to 9.4 percent from 9.5 percent in June – the first decline since April 2008, based on Labor Department figures.

Amid such glimmers of improvement, commercial real estate is a “particular danger zone,’’ said Janet Yellen, president of the Federal Reserve Bank of San Francisco, in a July 28 speech in Coeur d’Alene, Idaho.

Now, I know many economists will dismiss the troubles in commercial real estate because it lags the economic cycle. But this isn’t just any cycle and many economists still do not understand what drove asset prices so high.

In short, many economists ignore the role of global pension funds and other institutional players like insurance funds and endowment funds. All that money chasing “alpha” was bound to end badly. The global pension Ponzi scheme played a huge role in feeding this bubble and now the alternatives nightmare continues.

And it will continue for a very long time. No V-shape recovery in commercial real estate or private equity. You can forget about that. That’s why when it comes to alternative investments, I prefer liquidity and tell institutions to focus on liquid absolute return strategies that offer true alpha (don’t pay fees for disguised beta!).

Commercial real estate and private equity woes are also hitting pension funds. Today, the Caisse reported it took a $5.7 billion hit in the first half of the year:

The troubled Caisse de dépôt et placement du Québec, still reeling from a disastrous 2008, failed to find its footing the first half of this year, as risky commercial real estate loans and private equity investments led to more than $5-billion in writedowns at the provincial pension fund manager.

The Caisse took the unprecedented move of announcing interim financial results Tuesday – indicating that an overall writedown of $5.7-billion on real estate and other investments completely wiped out gains on stocks in the first half of the year – in part to quell growing rumours about trouble in its property portfolio.

The Caisse, which manages the assets of 25 provincial funds including the Quebec Pension Plan, was stung by criticism last fall that it was too secretive, when it continuously rejected calls to reveal the extent of the damage it suffered as a result of October’s stock market meltdown.

Tuesday, the fund manager’s chief executive officer Michael Sabia signalled that the era of secrecy has passed, as he unveiled as major retrenchment at the real estate unit and an unwinding of the risky property investment strategies pursued under his predecessor, Henri-Paul Rousseau.

Those strategies bet on so-called mezzanine loans, essentially second and third mortgages on U.S. office buildings, on the assumption that commercial property values would continue to rise. The loans were riskier than conventional, secured mortgages, but carried much higher interest rates and produced strong returns for several years.

The Caisse was badly bruised in 2008 by its oversized position in currency and futures contracts and third-party asset-backed commercial paper holdings, posting a $40-billion loss last year, equal to a return of minus 25 per cent.

The ABCP exposure caused a further writedown of $400-million in the first six months of this year, the Caisse said Tuesday. Private equity and infrastructure investments caused a $1.3-billion hit, with most of that coming from its troubled investment in British Airports Authority (BAA).

But the majority of the Caisse’s pain so far this year stems from real estate, which accounted for 71 per cent of its writedowns. And the first-half real estate losses are on top of the negative 22-per-cent return the property portfolio yielded in 2008.

The writedowns this year erased the 5-per-cent return that the Caisse had earned on other investments to June 30, leaving it with “neutral” overall performance, Mr. Sabia said. “No one here thinks that neutral returns is what we should be aiming for,” he told reporters on a conference call. “There’s a lot of work to do in repositioning the Caisse and changing our strategies, and we’re going to continue to do that.”

Mr. Sabia has shaken up the real estate group’s management team, and the pension fund will stop investing in the higher-risk mezzanine loans and other forms of subordinate real estate loans.

The Caisse will also fold its Cadim division, which invests in multi-residential properties and hotels, into its office building subsidiary.

The rush into riskier commercial real esate lending intensified under Mr. Rousseau and his lieutenant Richard Guay, reflecting a risk management strategy that placed enormous faith in the protection offered by asset allocation. The theory was that the Caisse could hold riskier assets in many different categories without danger, since not all asset classes would collapse at the same time.

The market meltdown last fall put the lie to that idea. And by this spring, it was clear that commercial real estate was becoming the next asset class to crater. Earlier this year, the Caisse was forced to buy a New York office building on which it held low-ranking mortgage of $130-million (U.S.) after the building’s owner, Macklowe Properties, went into default. Had it not bought the building for a nominal sum of $100,000, the property would have gone into foreclosure and the Caisse would have had to realize a loss on the entire value of its mortgage.

Another sign of trouble in the real estate unit emerged last month when the head of Cadim, the Caisse division responsible for the property mortgages, suddenly left the pension fund manager. No reason was given for Richard Dansereau’s departure at the time.

Mr. Sabia said the Caisse still has strong real estate subsidiaries. “When I look at Ivanhoe Cambridge and SITQ, the quality of the operations, the size of these companies in the global framework of the real estate business over all, these are major, major companies that perform at a very high level with respect to operations.”

The restructuring will help the real estate businesses weather the challenges in the U.S. real estate market, he said.

The Caisse’s writedowns are paper losses based on mark-to-market accounting rules, which require the plan to ratchet down the value of its assets to what they would fetch in the market today. Mr. Sabia said he expects the market for hard-to-sell assets to remain difficult, given continuing weakness in the global economy.

The Caisse is the country’s largest pension fund manager. Deborah Allan, a spokeswoman for Ontario Teachers’ Pension Plan, declined to comment on Mr. Sabia’s decision to boost transparency at the Caisse but said “we do not have any plans to report more frequently than annually.”

A couple of comments. First, I commend Mr. Sabia for coming out to report these losses and provide an update on the Caisse’s performance. Other pension funds like Ontario Teachers’, OMERS, PSP Investments and even CPP Investment Board should follow his lead and report performance on both public and private markets (don’t hold your breath on that ever happening).

Third, I am curious to know why the former head of Cadim, Richard Dansereau, “suddenly left the Caisse” just like I would also like to know why André Collin, the former First Vice-President of Real Estate at PSP Investments, left that organization. Where are they now?

It doesn’t take a genius to figure out that the benchmark PSP uses for their real estate investments does not accurately reflect the underlying risks of those investments. In fact, look at the following table below (click to enlarge) taken from PSP’s FY 2007 report:

What this tells you is that the benchmark they are using in real estate clearly does not reflect the risks they are taking in the investment portfolio [Note: Who came up with this real estate benchmark and why did PSP’s Board of Directors approve it?!?]. In the good years, it helped them artificially boost overall returns (relative to the Policy Portfolio) and got them big bonuses as they claimed “significant value added” in real estate, but in the bad years this benchmark will severely hurt the Fund’s overall performance relative to the Policy Portfolio (that is where four-year rolling returns come in handy).

Unless, of course, they change the benchmark. How many times did PSP Investments change benchmarks in private markets (real estate, private equity and infrastructure)? Most people will never know because they do not publicly disclose their benchmarks for private markets, citing “competitive reasons”. We can however figure it out if all of a sudden benchmark returns shift drastically from one fiscal year to another.

That is a scandal and unfortunately PSP is not alone in keeping their private market benchmarks secret. Why do some large funds keep them secret? Because it allows them to claim “significant value added” in private markets so they can go on to collect huge bonuses as they easily trounce their bogus benchmarks.

Now that private markets have entered into a deep freeze, these pension fund managers are in deep trouble and they know it (unless they can tinker with their benchmarks). Some Canadian pension funds are now betting on emerging markets, investing in Brazilian commercial real estate. Again, does the benchmark accurately reflect the risks of these investments?

What was that comment Tom Barrack said, “There’s too much money chasing too few good deals, with too much debt and too few brains.” That is the understatement of the century and unfortunately we are all going to end up paying for these brainless decisions.

Reuters reports that JPMorgan Chase & Co is looking to sell 23 office properties in what may be the country’s largest office real estate sale this year. The property on offer could raise more than $1 billion according to the report from the WSJ.