I have to admit, I have a weakness for the intersection of the daft and science: 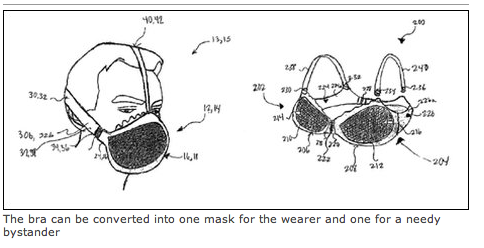 Male readers will no doubt assume that this means the original owner of the gas mask bra must strip in the case of emergency, and that that the real point of this exercise. But the bra was designed by a woman who demonstrated at the ceremony that it could be removed discreetly. Hhm, I am sure such niceties would not be observed in a bona fide emergency.

The BBC gives a recap of the ceremony:

The Ig Nobel Prizes were presented to the winners by genuine Nobel laureates….

Past winners also returned to take part in the celebrations. They included Kees Moeliker, the discoverer of homosexual necrophilia in the mallard duck, and Dr Francis Fesmire, who devised the digital rectal massage as cure for intractable hiccups.

Each new winner was permitted a maximum of 60 seconds to deliver an acceptance speech. The time limit was enforced by an intractable eight-year-old girl.

The evening also featured numerous tributes to the evening’s theme of “Risk”.

A 15-minute risk cabaret concert by the Penny-Wise Guys preceded the ceremony, during which the band paid special tribute to fraudster Bernie Madoff.

Other winners per the Boston Globe:

Veterinary medicine: Dr. Catherine Douglas and Dr. Peter Rowlinson of Newcastle University, Newcastle-Upon-Tyne, UK, for showing that cows who have names give more milk than cows that are nameless.

Peace: Dr. Stephan Bolliger, Dr. Steffen Ross, Dr. Lars Oesterhelweg, Dr. Michael Thali, and Beat Kneubuehl of the University of Bern, Switzerland, for determining — by experiment — whether it is better to be smashed over the head with a full bottle of beer or with an empty bottle.

Economics: The directors, executives, and auditors of four Icelandic banks — Kaupthing Bank, Landsbanki, Glitnir Bank, and Central Bank of Iceland — for demonstrating that tiny banks can be rapidly transformed into huge banks, and vice versa — and for demonstrating that similar things can be done to an entire national economy.

Literature: Ireland’s police service, An Garda Siochana, for writing and presenting more than 50 traffic tickets to the most frequent driving offender in the country — Prawo Jazdy — whose name in Polish means “Driver’s License.”

Mathematics: Gideon Gono, governor of Zimbabwe’s Reserve Bank, for giving people a simple, everyday way to cope with a wide range of numbers — from very small to very big — by having his bank print bank notes with denominations ranging from 1 cent to 1 hundred trillion dollars.

Biology: Fumiaki Taguchi, Song Guofu, and Zhang Guanglei of Kitasato University Graduate School of Medical Sciences in Sagamihara, Japan, for demonstrating that kitchen refuse can be reduced more than 90 percent in mass by using bacteria extracted from the feces of giant pandas.