Compromise Bill Could Block States on Bank Rules New York Times. This is not good news.

Wall Street Steps Up Political Donations, Lobbying Wall Street Journal. This contradicts a story that ran in the New York Times last week and is more in line with what one would expect to see.

Google Searchers Are Obsessed With The Dollar Collapse Clusterstock. I’m not a believe in short-term trading, but anytime you have a strong consensus on one side of a trade…they are already invested in it! This looks like a sign of a possible short killing rally (and I went long anti dollar bets quite a while ago). 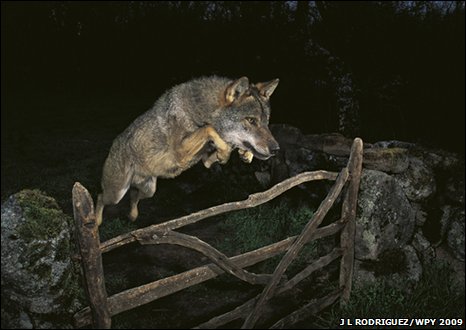 A picture of a hunting wolf has won the prestigious Veolia Environment Wildlife Photographer of the Year 2009 award.

Jose Luis Rodriguez captured the imaginations of the judges with a photograph that he had planned for years, and even sketched out on a piece of paper.

“I wanted to capture a photo in which you would see a wolf in an act of hunting – or predation – but without blood,” he told BBC News. “I didn’t want a cruel image.”…

When he started planning the photograph, he feared that he might not be able to get close enough to the Iberian wolves.

This subspecies of the grey wolf lives close to human habitation in northern Spain. They are often persecuted by people who see them as a threat to livestock, and are consequently very wary of people.
Watching the animals as they returned to the same spot to collect food each night, Mr Rodriguez decided on his dream shot…

He hopes that his picture, “showing the wolf’s great agility and strength”, will become an image that can be used to show just how beautiful the Iberian wolf is and how the Spanish can be proud to have such an emblematic animal.