Served by Jesse of Le Café Américain
Gold is a superior store of value.

It resists the attempts by the monetary authorities to debase it, because except for concerted attempts to suppress its price through non-profitseeking selling at key market points by central banks, and naked short selling by the global commercial banks in the paper markets, gold cannot be created and controlled by financial engineers like Ben Bernanke.

It provides a refuge, a store of wealth for private citizens during a period of general currency risk.

A simple chart should suffice. 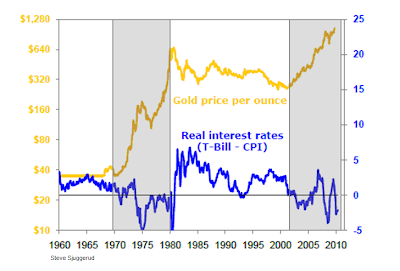 As part of the quantitative easing regime, the Fed has so debased the financial system that dollar debt is paying negative interest rates once again as it did in the 1970’s.

In other words, it is costing money to hold dollar financial assets because of the mispricing of risk being engineering by the G7 central banks.

So, people and some central banks are seeking refuge in a stable currency that is beyond the control of the financial engineers.

“With the exception only of the period of the gold standard, practically all governments of history have used their exclusive power to issue money to defraud and plunder the people.” Fredrich August von Hayek

“The gold standard has one tremendous virtue: the quantity of the money supply, under the gold standard, is independent of the policies of governments and political parties. This is its advantage. It is a form of protection against spendthrift governments.” Ludwig von Mises

Alan Greenspan himself states the case most eloquently in his famous essay from 1966 Gold and Economic Freedom.

“This is the shabby secret of the welfare statists’ tirades against gold. Deficit spending is simply a scheme for the confiscation of wealth. Gold stands in the way of this insidious process. It stands as a protector of property rights. If one grasps this, one has no difficulty in understanding the statists’ antagonism toward the gold standard.”

When the currencies of the US and Europe are debased by the financial engineers for the sake of the banks, when spendthrift governments run enormous deficits to fill the pockets of their special interests, informed wealth seeks a refuge in places where it cannot be so easily consumed for the exclusive benefit of the political elite. 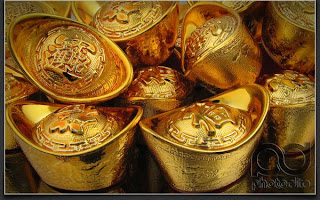 This is sadly the case today, especially within the Anglo-American sphere of influence, from which the dollar had become the new opium trade, viciously addictive and debilitating. And so we have seen an historic flight to safety that began in the developing world, but is gaining momentum as the global dollar regime falters.

If you hold dollars, the Fed and the Treasury can confiscate your wealth, virtually at will. That is real power.

When the Fed lifts interest rates to again provide a positive return against inflation, then gold may stop rallying and reach a stable equilibrium price. This will be more difficult to do than it was to debase, as it is always easier to destroy than to create.

And it may be difficult to determine when that time comes, because the US bureaucrats have so thoroughly altered the Consumer Price Index over the past ten years that it is no longer a fair measure of inflation. Therefore it is a challenge to determine what is real and what is not, what is priced fairly and what is not. This is the hallmark of the modern western bankers and their accountants, and their demimonde in politics and the media.

Still, the message of the market is quite clear, to anyone who will listen.

A pleasant Thanksgiving holiday to my American friends, and a reminder to the rest of the world that you must muddle through without the direction of Wall Street for the next few days.

How fitting that Thanksgiving was declared a national holiday by Lincoln in the depths of the Civil War, and made official by the Congress in 1941, at the end of the Great Depression, on the cusp of a terrible world war.

And Lloyd [Blankfein], I would not join the many and be happy at all if you took your own life as you have recently confessed that you feared they would. But there might be a cause for celebration if a master of the universe such as yourself would simply take this timeless message into you heart, and make it the light of the rest of your life. That is the right pricing of risk, the proper valuation of all that you are.

“Come, let us sing to the Lord; let us make a joyful noise to the rock of our salvation. Let us come before His presence with thanksgiving; let us make a joyful noise to Him with songs of praise. For the Lord is a great God, and a great King above all. In His hand are the deep places of the earth, the heights and strength of the hills. The sea is His, for He made it, and His hands formed the dry land. Come, let us worship respectfully, let us kneel before the Lord our Maker. For He is our God and we are the people of His pasture and the sheep of His hand. Now, if you will but hear His voice.” Psalm 95

No time for despair, now is the time to be surprised by joy.

“I do not think of all the misery, but of the glory that remains. Go outside into the fields, nature and the sun, go out and seek happiness in yourself and in God. Think of the beauty that again and again discharges itself within and without you, and be happy.” Anne Frank